PA seeks to protect rights of Palestinians working in Israel

The Palestinian government is taking measures to end permit brokerage, which can cost job seekers half their salaries to work in Israel. 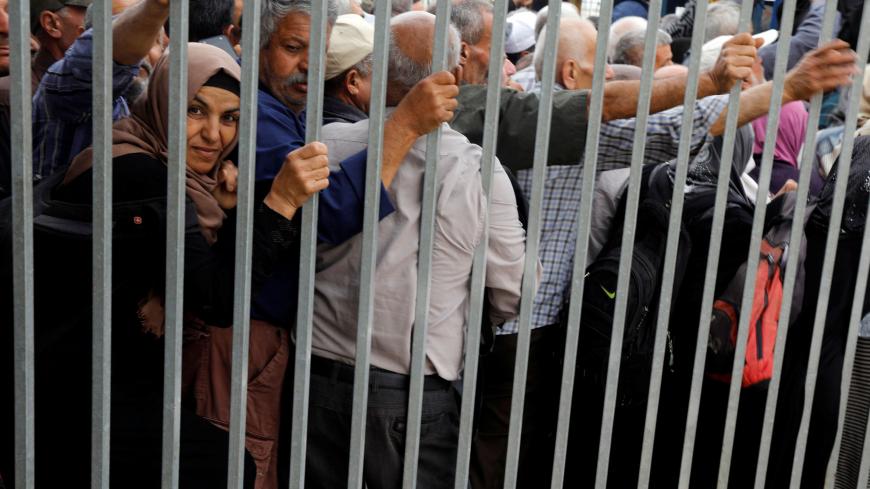 Palestinian workers wait to cross the Israeli-controlled Al-Jalama checkpoint as they head to work in Israel, near Jenin in the Israeli-occupied West Bank, May 2, 2019. - REUTERS/Raneen Sawafta

The government on Oct. 15 issued a decision to ban the practices of these intermediaries, who charge between 1,500 and 3,000 shekels ($425 and $850) per month, Haaretz reported Oct. 23. Palestinian Minister of Labor Nasri Abu Jaish released a statement saying the government decision also will allow workers to prosecute intermediaries to recover the amounts they paid.

In an Oct. 21 letter to Prime Minister Mohammad Shtayyeh, the International Trade Union Confederation (ITUC) welcomed the ban, saying brokerage "promotes modern forms of slavery." The ITUC, which says it represents 207 million workers in 63 countries, called the ban a good first step and urged the government to take additional measures to protect workers.

The number of permits issued for free for Palestinians is estimated at 100,000 per year. Israel sets conditions for acquiring the permits, including that the recipient must be over 22 years old, married and have no security records. Israel also does a background check to make sure workers haven't been involved in any hostile act against Israel.

Rami Mahdawi, director-general of employment at the Palestinian Ministry of Labor, told Al-Monitor the ministry is seeking to have several Palestinians prosecuted for allegedly exploiting workers' needs to obtain work permits in Israel. He expects legal measures will be taken.

Mahdawi said Palestinian workers incur heavy losses in the process. As much as half of their paychecks go to the brokers, and Palestinian laborers are not officially registered as workers. Consequently, they lose their social security, end-of-service pensions and compensation if they are injured at work.

He said the ministry has received several complaints from workers against their brokers.

The brokerage practice violates the Paris Economic Agreement signed between Palestinians and Israel in 1994. The pact regulates the entry of Palestinian workers into Israel through Palestinian official bodies, ensuring workers’ full access to their labor rights.

Walid Wadhan, a spokesman for the Palestinian General Authority for Civil Affairs, told Al-Monitor the agency is the only one authorized to facilitate the permitting procedure for Palestinians. He accused Israeli authorities of ignoring Israeli employers' exploitation of Palestinian workers.

He explained that Israel issues permits for two parties only: the civil affairs authority, which provides lists of people seeking permits, and Israeli employers who legally acquire permits and communicate with Palestinian workers either directly or through intermediaries.

A permit broker, who spoke on condition of anonymity for fear of reprisal, told Al-Monitor the fee he charges covers his expenses and efforts, as he can get permits issued within just one week. He explained that many of his customers often try for months to obtain permits through official Palestinian departments but are unable to either because of Israeli security rules or because of bureaucracy and negligence in the Palestinian government.

He stressed that he splits the money he receives equally with the employers in Israel, through which he receives the work permits.

In an interview with Al-Monitor, Shaher Saad, secretary-general of the Palestinian General Federation of Trade Unions, said brokers are costing the Palestinian economy more than $1 billion annually. He also noted that international labor conventions dictate that workers should not pay for job opportunities.

According to a February report by the Palestinian Central Bureau of Statistics, there were 127,000 Palestinian workers in Israel in 2018, of which 59% had work permits and 30% worked without permits. The other 11% held Israeli identity cards or foreign passports.