Protesting Ankara’s crackdown on dissent, two of the largest international labor organizations and dozens of national trade unions have boycotted a major multilateral meeting in Istanbul. 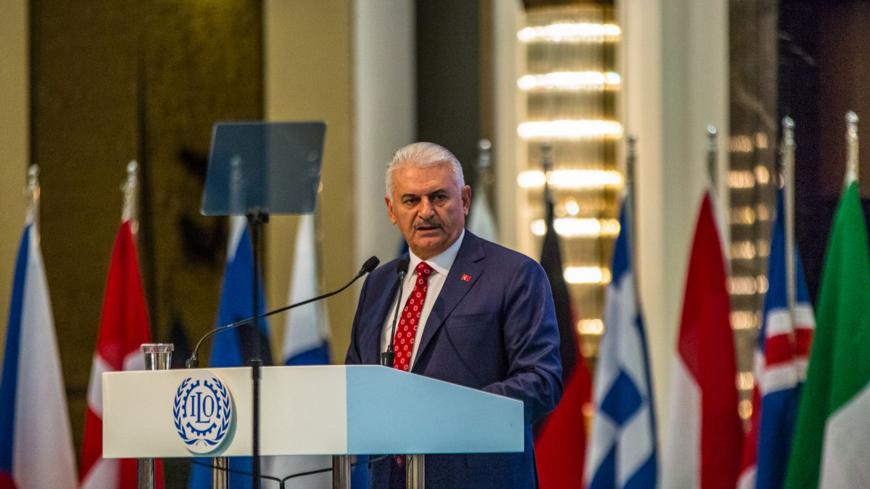 ANKARA, Turkey — The 10th European Regional Meeting of the United Nations' International Labor Organization (ILO), held Oct. 2-5 in Istanbul, was overshadowed by the protests of international trade unions and labor organizations, which boycotted the meeting.

The main topic of the meetings was Turkey’s state of emergency, which has been in force since the failed coup attempt in July 2016, as well as the government’s restriction of democratic rights via legislative decrees, an instrument made available by the state of emergency. The mass dismissals of employees in the public sector and universities, the seizure of private companies and the imprisonment of tens of thousands of people dominated the trade unions’ talks with government officials. The trade unions demanded a return to normalcy and an end to practices related to closed associations, trade unions and civil society groups.

In a joint statement after the meetings, ITUC, ETUC and their Turkish affiliates urged Ankara to lift the state of emergency, put an end to mass expulsions and detentions, reopen the closed trade unions and nongovernmental organizations, and stop restricting democratic freedoms.

None of those demands were met. As a result, ITUC and ETUC, which represent millions of people, called on trade unions and governments to boycott the ILO meeting in Istanbul. In justifying the boycott, Patrick Itschert, the ETUC official in charge of international relations, said, “Press freedom does not exist in Turkey. Turks are even told when to use winter tires through legislative decrees. This has gone too far. Academics have become pizza sellers.”

In a Sept. 27 open letter to delegates of the ILO meeting, Sharan Burrow and Luca Visentini, the respective general secretaries of ITUC and ETUC, slammed Turkey as “a state where workers are subjected to the most serious human and labor rights violations,” stressing that more than 125,000 people had lost their jobs in the crackdown after the putsch. The letter further said, “With some USD 11 billion worth of corporate assets having been taken over by the government, along with the dismissal and often imprisonment of workers in both the public and the private sectors, this constitutes a systematic denial of rights with few precedents in modern economic history. Freedom of association both for workers and for business has been stripped away. We have documented the arrests and imprisonment of union members taking part in protests, speaking out on social media or campaigning against the anti-democratic measures inherent in the [April 16] referendum, and have presented such to the ILO. Indeed thousands of dismissals, house raids and even armed attacks on union leaders represent everyday risks for trade unionists.”

In Turkey, the Revolutionary Trade Unions Confederation and Confederation of Public Employees’ Trade Unions heeded the boycott call, with the former saying in a statement that it would not attend “an ILO meeting from which workers are absent.” According to Aziz Celik, a scholar of labor economics at Turkey’s Kocaeli University, the boycott reduced the ILO meeting to “an attempt to make an omelet without eggs.”

Responding to ETUC’s boycott, trade unions and confederations from 47 countries in the 51-country European region snubbed the Istanbul meeting. The only labor delegates to attend were from Azerbaijan, Belarus, Kazakhstan and Russia. In terms of labor groups affiliated with ITUC, 88 out of 91 members boycotted the gathering. Only Azerbaijan’s Trade Union Confederation and Turkey’s Turk-Is and Hak-Is, which are close to the government, took part in the meeting.

The venue was largely empty when the event kicked off Oct. 2. In his opening speech, Turkish Prime Minister Binali Yildirim slammed the boycott and sought to justify the mass dismissals and the ongoing state of emergency. Referring to Germany’s reunification after the fall of the Iron Curtain, Yildirim said, “As soon as Eastern and Western Germany were reunified, 500,000 public servants were dismissed in a single day. No one protested Germany. The European Court of Human Rights closed the issue, saying that this was all right, that no country can work with people who are not loyal to it.” Decrying “double standards” against Turkey, he added, “No matter what they say, Turkey is a state of law. No one can get away with what they have done.”

"The ILO’s Istanbul meeting was beneficial in the sense that everyone saw the reality in Turkey — no freedom, no right to speak, no democracy …"

Labor and Social Security Minister Julide Sarieroglu, for her part, spoke of how Ankara welcomed millions of Syrian refugees and fell victim to a coup attempt, while expressing regret over European criticism of Turkey. She, too, sought to draw parallels between Turkey and Western countries. “Our declaration of a state of emergency to protect our citizens is as natural as France’s declaration of a state of emergency after terrorist acts or the United States’ declarations of states of emergency,” she said. According to the minister, the adoption of a policy framework called “The Istanbul Initiative for the [ILO’s] Centenary: Future for Decent Work” was of “historic” importance.

ILO Director-General Guy Ryder also underlined the importance of the initiative, and delegates adopted his report on the issue.

In remarks to Al-Monitor, professor Aziz Konukman of Ankara’s Gazi University drew attention to the fact that two of the largest international labor confederations and trade unions from 47 countries had boycotted the ILO gathering in Turkey. “This state of affairs shows that labor rights [in Turkey] have hit bottom during the state of emergency,” he said.

Konukman recalled that President Recep Tayyip Erdogan defended the state of emergency as a means to stop strikes at workplaces “so that the business world can function more comfortably” in an address to businesspeople in July. Konukman added, “Yet judicial independence and property guarantees are what international investors look for in the first place. The government is turning a blind eye to that. The ILO’s Istanbul meeting was beneficial in the sense that everyone saw the reality in Turkey — no freedom, no right to speak, no democracy, no judicial independence, no legal guarantees, no freedom of association. The international boycott isolated Turkey.”

According to Bulent Pirler, a former secretary-general of the Turkish Confederation of Employers’ Trade Unions, ITUC and ETUC have long sought to ruffle Turkey. “International workers’ organizations have long [been unfriendly] toward Turkey. Previously, they tried to have Turkey placed on the black list in the ILO,” Pirler told Al-Monitor. “Instead of boycotting [the Istanbul meeting], the labor unions should have attended and expressed their views. Turkey has been through a serious coup attempt, something that many countries have never experienced.”

The ILO meeting is now in the past, but it exposed how fast Turkey has regressed in terms of democratic freedoms, including labor rights and the freedoms of association and speech. Though trade unions close to the government attended the meeting for the sake of appearance, the sweeping boycott of international labor organizations made a strong impact. The participation of ILO member countries on a governmental and ministerial level was also very low, which left Turkey largely isolated. Yet the government’s response — turning a deaf ear to the appeals and the criticism — indicates that even tougher times are in store.