Why Israel should expand work permits for Palestinians

In order to end the situation where Palestinians pay thousands of shekels to obtain work permits in an illegal manner, Israel should expand the number of permits and offer job seekers some hope. 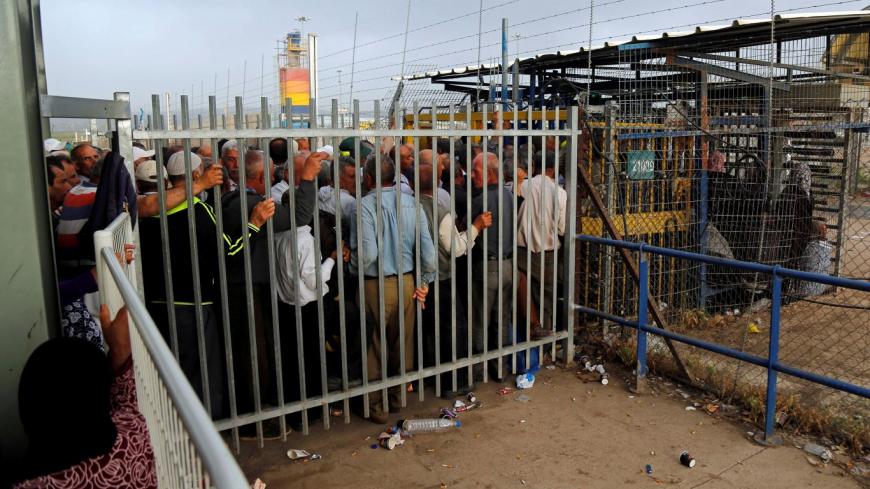 Palestinian workers wait to cross the Israeli-controlled Jalama checkpoint as they head to work in Israel, near Jenin in the Israeli-occupied West Bank, May 2, 2019. - REUTERS/Raneen Sawafta

Blue and White party leader Benny Gantz may be aware of the problem of phony work permits for Palestinians from his many long years of service in the Israel Defense Forces (IDF). Or maybe he isn’t. Still, he was given a mandate Oct. 23 to try to form a new government. Should he succeed and become the next prime minister, he should dive right into this issue. It won’t be too hard for him to make the necessary changes, which would benefit all parties. He would have to do it with the same urgency that he would have to declare the Hilltop Youth to be a terrorist organization. The Hilltop Youth, a group of violent settlers active in the West Bank, not only harm the Palestinians, their mosques, and their olive groves, but also the IDF, which the group regards as jackbooted occupiers.

The issue of these illegal permits to work in Israel was raised by the Palestinian government when it met in Ramallah at the beginning of October. The problem was presented in all its severity at the meeting, chaired by Prime Minister Mohammad Shtayyeh. The entire process is completely illegal as far as the Palestinians are concerned, but it is equally illegal from the Israeli side of things.

This is the situation. There are tens of thousands of Palestinian residents of the Palestinian Authority who are employed in Israel. The majority of them work in construction, while others work in the hospitality industry, agriculture and other areas. In order for them to work in Israel, they must be approved by the Israeli security forces and have a permit that designates their employer. But not every Israeli employer can ask for a Palestinian worker. There are caps in place in all of the major areas of employment, and it is only after the Ministry of the Interior confirms, or at least concludes, that there are no Israeli workers willing to work in certain jobs that officials will approve permits for a set number of workers. Most of these caps do get filled. Employers send their requests to the Palestinian Ministry of Labor, and the Palestinian Authority distributes the permits to Palestinian workers, who come to Israel and work for the specific employers who requested laborers.

But that is just part of the story. There are many more Palestinian laborers than permits. Thus, a black market had stepped in to benefit three parties: Israeli employers, Palestinian intermediaries and bureaucrats working for the Palestinian Authority.

A study of the issue released Sept. 25 by the Research Division of the Bank of Israel paints a grim picture that is simultaneously severe and jaw-dropping. About a third of Palestinians working in Israel pay an average of 2,000 shekels [$565] per month for phony permits allowing them to work in Israel. The sum is paid at the beginning of each month, regardless of whether the worker is employed throughout the entire month or not. Many of these workers return home with a monthly income amounting to a few hundred shekels only, because most of the money that they do earn is used to purchase the monthly permit. When the territories are under closure, and it is impossible to move between them and Israel, the cost of such a permit could actually exceed a laborer’s monthly income.

How does this happen? Wherever there are restrictions and caps, there will be a black market. The same is true in this case. It is a system that has been operating out of sight for decades! Permits allowing the employment of Palestinians are distributed among the various Israeli employers, with each permit listing the name of the specific employer. Some need all the Palestinians allocated to them, but a few just need some of the Palestinians for whom they have permits. This sets Israeli creativity into overdrive. The idea is very simple. The employers, instead of simply using the permits they actually need and leaving the rest unused, sell the remainder off. Palestinians who purchase those permits use them to enter Israel, where they can search for a real employer. The name of the fictitious employer remains on the permit, without the Palestinian worker ever seeing that employer, even from a distance.

Employers with extra permits inform Palestinian middlemen about them. The permits are transferred to the Palestinian Ministry of Labor, and almost everybody comes away a winner. It has become a veritable “industry” that brings in about 480 million shekels [$135 million] a year. The fictitious employers in Israel pocket a large part of the sum, so that sometimes it is more worth their while to sell their permits than employ a worker! Palestinian middlemen also benefit from this black market, with some of them even opening employment offices in which they sell the coveted work permits to the highest bidder. They do this openly in the cities of the West Bank, without feeling any need to hide what they are doing. Some people claim that there are also those in the official Palestinian bureaucracy who benefit from this system. The one group that pays the price for all this is the Palestinian workers themselves. Among other things, they don’t become big fans of Israel as a result of this process, which ends up robbing them of most of their earnings.

The State Comptroller investigated this serious issue in 2014. Two years later, the government met to discuss it. This ended with a formal decision to take steps to eliminate the connection between workers and specific employers and to allow Palestinians who passed the security filter to find alternative employers on their own to replace whomever originally hired them, as long as their permit is still valid. A pilot program to test this change is currently underway in the Atarot industrial zone. Upon its completion at the end of this year, the linkage could be eliminated entirely. Nevertheless, the caps will remain in place, and with them excess permits. Employers who sell permits that they don’t need will continue to do so. In fact, none of the interested parties will be in any hurry to give up the advantages offered by the black market.

It isn’t hard to find employers who provide fictitious work permits. Someone needs to make sure that this issue appears high on the Israeli national agenda. Apart from efforts to advance the diplomatic process on a macro level, which — I hope — will be a focus of Israel’s next government, an effort must be made to change the day-to-day lives of millions of people living, whether directly or indirectly, under Israeli occupation for so many years.

Following the Oct. 18 death of former Supreme Court President Meir Shamgar, there has been a heated argument over whether his decision to open the court to petitions by residents of the occupied territories made the occupation more viable, and as a result, extended it, or whether it offered a modicum of justice to Palestinians living under occupation and made their lives easier. It seems to me that in the aggregate, even if most petitions brought by Palestinians were rejected by the Supreme Court, there was nonetheless someone in Jerusalem who could warn against injustices and in some instances, fix them. I do not believe that preventing Palestinian suffering extends the occupation. The occupation has been extended by a series of successive governments that have proved unwilling to partition the land. When a government that places partition of the land (the two-state solution) high on its list of priorities is finally formed — and I hope it happens soon — it will also have to ensure that improving the day-to-day life of the Palestinians is a top priority.