Will Arabs work with Israel to fight violence in their villages?

Israel's public security minister and the Arab Joint List agreed to work together to stop the spread of illegal weapons in Arab towns in Israel, but whether the community cooperates remains to be seen. 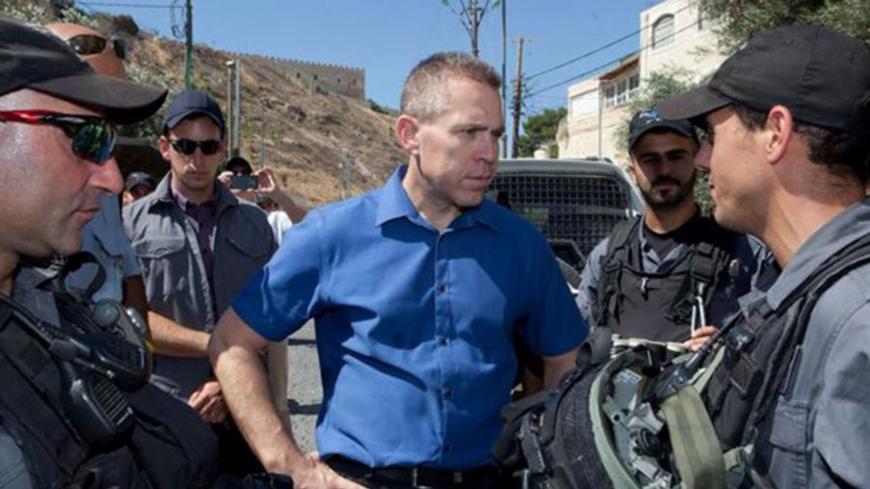 GAZA CITY, Gaza Strip — Arab political leaders in Israel hope their constituents will come to cooperate with Israeli security services to eliminate violence in Arab towns and cities, where crime has reached high levels in part because of the spread of unlicensed weapons.

For decades, the Arab community has largely refused to deal with official Israeli institutions, which they accuse of racism against the 1.8 million Arabs who live there and make up 20% of Israel's population. For example, in July 2018, Israel adopted a law claiming Israel as the exclusive "nation-state" of the Jewish people. The law reads, “The right to exercise national self-determination in the State of Israel is unique to the Jewish people,” and it eliminated Arabic as an official language.

But Israeli Minister of Public Security Gilad Erdan and the heads of the Arab Joint List — which holds 13 seats in the 120-member Israeli Knesset — agreed Oct. 10 to Israeli police carrying out a gun collection campaign in the next few days or weeks. Police will ask citizens of Arab towns and cities to voluntarily hand over their unlicensed weapons; those who do will not be prosecuted. In addition, 620 policemen have been deployed permanently in these towns to enhance security, the Israeli Public Broadcasting Corporation (Makan) reported Oct. 11.

Makan noted that Israeli police had launched a similar campaign to collect unlicensed weapons in the Arab community in 2017, but the effort produced only three pistols out of hundreds or thousands of weapons spread across Arab towns. Police blamed the poor response on a lack of Arab cooperation.

However, Makan quoted parliament members in the Arab Joint List as saying they will cooperate this time and will call on Arabs to hand over any unlicensed weapons.

The agreement comes as Arab villages and towns in northern Israel are witnessing ongoing protests and strikes against the spread of violence. The demonstrations began after the Oct. 1 killing of two young Arab brothers from the village of Majd al-Krum in northern Israel. Protesters accuse police of failing to fight crime in the Arab community.

Since the beginning of 2019, 75 Arabs in Israeli towns have been slain, including 11 women, compared with a total of 70 in all of last year. Some of the violence is blamed on organized crime and gangs.

“The agreement aims to combat organized crime within our community and to improve the performance of the Israeli police in prosecuting the perpetrators,” Aida Touma of the Arab Joint List told Al-Monitor.

Touma rejects the idea that this new agreement shows Arab openness to cooperating with Israeli security institutions. “We did not seek to create cooperation with the Israeli police, given the racism toward Arabs in Israel. We simply want the Arab community to understand our need for the police’s role in eliminating violence and crime,” she noted.

The source of illegal weapons in the Arab community, she said, is “Jewish arms dealers in Israel who sell them to Arabs, in addition to locally manufactured primitive weapons.” She said Israeli authorities aren't doing enough to stop unlicensed weapons from reaching Arab neighborhoods.

However, Israeli newspaper Maariv on Oct. 20 quoted a police official as saying that more than half of the weapons in Arab towns are locally manufactured, making it difficult to control them. “Without the help of the Arab community, this phenomenon cannot be stopped,” the official said.

A recent internal Israeli police report noted problems both with violence among Arabs and Arab hostility toward police. Officers sent to Arab towns regularly face violence organized against them, even when they are trying to respond to distress calls, local news media reported.

Ibrahim Abu Jaber, political science professor at An-Najah University in Nablus, told Al-Monitor the agreement between the heads of the Arab Joint List and Erdan “will not be accepted by most of the Arab community, which refuses to cooperate with Israeli authorities.”

Abu Jaber, who lives in the Arab town of Kafr Qassem, said, “The Joint List will take the Arab community down the rabbit hole. Our main conflict with the Israeli government is a political conflict related to our existence as Arabs, in light of the racist attempts to displace us from our villages in the Negev Desert.”

The permanent deployment of 620 Israeli police in Arab towns and cities “will not eliminate violence, but will only increase it," as police aren't hesitant to fire at Arabs, he said.

Saleh Lotfi, director of the Center for Contemporary Studies in the Arab city of Umm al-Fahm, told Al-Monitor, “The agreement is worthless — an absolute fail.”

He added, “It makes no sense for us to be treated with racism and oppression by the Israeli authorities, and at the same time seek cooperation with them.”

Meanwhile, Touma noted that the agreement includes a five-year plan to combat unlicensed weapons in Israel before they make it to the Arab community, by eliminating their sources and increasing penalties on smugglers and owners, as well as launching programs in Arab schools to educate students about the dangers of crime.

But Lotfi does not expect the Israeli authorities to implement that plan. “This is the agreement of illusion. Israel will not do anything to eliminate violence in the Arab community, because ongoing violence is its pretext to continue portraying the Arab community as a criminal, unruly and unregulated society.”

Lotfi said the best way to get rid of violence “is not by opening up to the Israeli security institutions and cooperating with them, but through activating Arab tribal committees to combat and eliminate violence.”