Crimes continue to take place in the Palestinian villages and towns of Israel, while the Israeli government fails to pursue them legally. 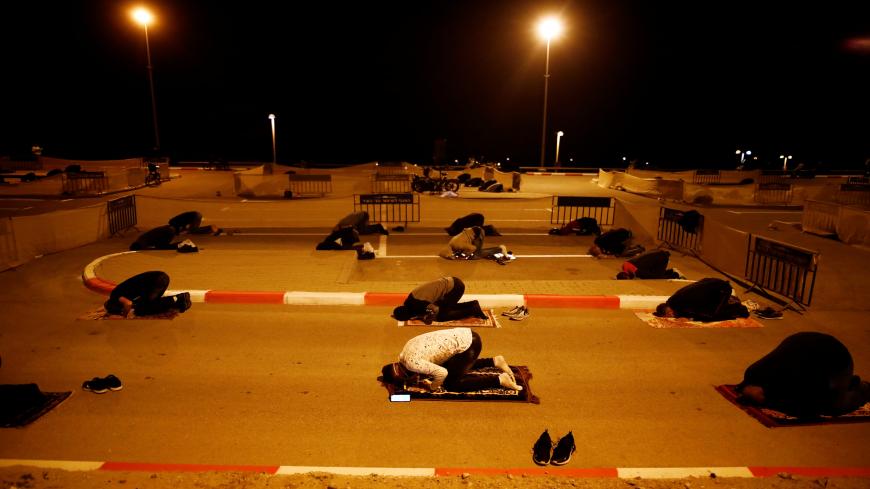 Muslim worshippers pray in the ancient Israeli port city of Jaffa in an empty parking lot for Ramadan prayers as mosques are closed due to the coronavirus pandemic, April 27, 2020. - REUTERS/Corinna Kern

Mohammad Watad, a youth from Jatt, a Palestinian Arab town in Israel, was stabbed to death by unknown assailants June 17. The crime, which shook the Palestinian community in Israel, came only a few hours before another Palestinian in Jaffa was killed in a shooting, and a third youth from Kafr Yasif also succumbed to his wounds after being shot June 16. The latest crimes bring the number of Palestinian victims of crimes in Israel to 45 since early 2020.

These figures, which have been on the rise for years, are haunting the Palestinian community inside Israel given the absence of any solutions, and the subsequent social and economic impacts these crimes have had on the Palestinians in Israel.

In response, Palestinians in Israel are holding protests demanding that the Israeli police hold the perpetrators accountable. They accuse Israel of turning a blind eye to what has become organized crimes in recent years, and believe that the local leaderships — including local councils, political parties and Arab Knesset members — are unable to counter such a phenomenon, as they are placed on the sidelines of security issues that the Israeli government handles.

Since early 2020, the number of killings hit 45 by June 17, including eight women, while 97 Palestinians were killed in 2019, including 11 women, according to the Aman Center – The Arab Center for Safe Society, which follows up and fights against such crimes.

Director of the Aman Center Reda Jaber told Al-Monitor, “The reason behind increasing violence among Palestinians in Israel is because they are a minority that lack any attention from the [Israeli] state, which fails to impose the rule of law and allocate the necessary budget to fight crime. All this leads to the increasing violence and killings among the Palestinian community in Israel.”

Jaber said, “Had the state handled this phenomenon seriously in the past years, it would not have reached such a situation,” in reference to the organized criminal gangs that prevail in the Palestinian community in Israel.

According to Jaber, the lack of social justice within the Palestinian community in Israel, and the absence of any local leaders capable of reining in the situation have created a vacuum that helped these gangs control the Palestinian community fully. “It does not stop at the killings. The gangs are in control of the economy and the distribution of resources and powers. Even at the social level these gangs are controlling families,” he added.

The absence of a judicial legal system and a law enforcement force, namely the Israeli police, have helped these gangs become more powerful as Israel turns a blind eye to violence among the Arab population.

Amid the Israeli negligence, feminist institutions are fighting against these crimes, particularly since many Palestinian women have been killed. Palestinian families hire people to kill their daughters for honor or social reasons, Naila Awad, the director of Women Against Violence, said.

Awad told Al-Monitor, “Since the 1990s, we have been warning against these gangs that are stealing women’s lives. We [warned] that the situation will escalate into crimes targeting the entire society. Here we are today, witnessing the very results.”

Awad believes that when society turned a blind eye to the killing of women and considered them to be family affairs, and when the national and secular party leaders remained silent on them, such criminality gained an upper hand on the authorities.

Awad does not deny that the Israeli government’s neglect and lack of judicial pursuits are among the reasons behind this phenomenon. The preliminary results of a study conducted by her organization and focusing on the killings of women between 2008 and 2018 showed a lack of pursuits and indictments in 50% of the cases, in addition to the lack of details related to the crimes.

Commenting on the solutions put forward to resolve this serious crisis, Awad noted that radical solutions from within the Palestinian community are necessary without relying on the role of the Israeli government, which espouses racist policies against the Palestinian minority, and where national security prevails over human and social security.

In regard to the ability and role of the Arab parties, which secured 15 seats in the Knesset in the latest Israeli elections, in bringing about a change, Awad said, “they could push toward a better government performance, but not in a radical way.”

Jaber seems to be more optimistic about the role Arab leaders can assume in bringing about change from within the community, rather than the Knesset, by reorganizing the community in a way that would allow it to require that the state takes steps toward imposing the law and prosecuting criminals. According to him, the political leaders are the ones that are most capable of accomplishing this task.

Nevertheless, questions arise about the ability of leaders in fighting the violence in Arab communities, particularly since they opted for the fight against violence and killings to be the top campaign promises of the Arab Joint List in the last elections.

Knesset member Aida Touma Sliman told Al-Monitor, “It is hard to tackle this phenomenon away from the political reality inside a state that accuses the Palestinians of hostility and considers them a demographic threat. That is affirmed by [the Israeli state] dealing with the crimes as internal affairs.”

According to Sliman, this view started to change after a popular movement in the Palestinian community, led by political leaders, was ignited in order to break the silence and shed light on the government’s negligence of this phenomenon.

Sliman believes that fighting these gangs and prosecuting them require an active executive authority, referring to the police, a clear government action plan, as well as parliamentary action from the Arab Knesset members. She said the latter have now managed to form a Knesset committee for the affairs of Arabs in Israel.

According to Sliman, parliamentary efforts, backed by an ongoing popular movement, and awareness campaigns, will compel the Israeli government to seize the weapons that are widely spread among Arabs in Israel, prosecute the criminals  and undermine the gangs’ material resources.