The crime rate in the Palestinian towns of Israel is on the rise and likely to continue, as Israeli security forces face accusations of not enforcing their laws there and letting the perpetrators roam free. 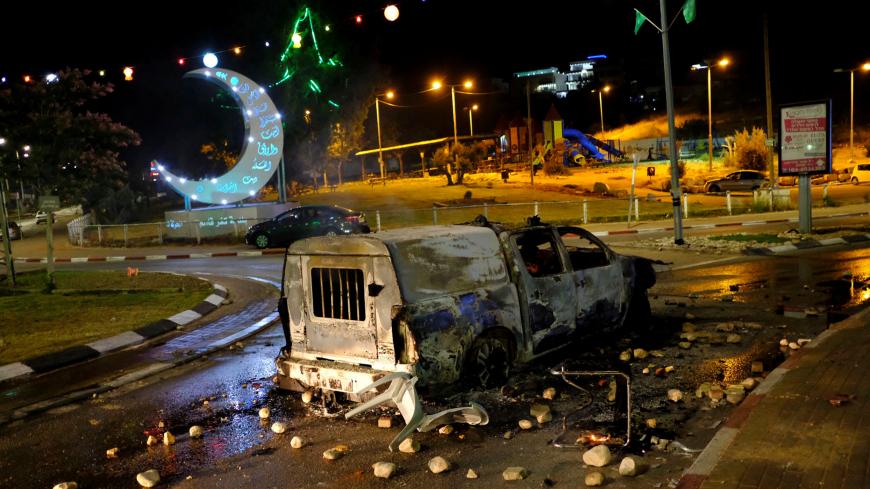 A burned-out police car that was destroyed during clashes that erupted in the Arab town of Kafr Qassem, Israel, June 6, 2017. - REUTERS/Tomer Appelbaum

RAMALLAH, West Bank — Palestinians who live within the Green Line (Israel) are exposed increasingly to violence in their towns and villages. On May 28, Samar al-Khatib from Jaffa was killed and her friend wounded after their vehicle was shot at near Rishon LeZion. Abdul Salam Azba was shot May 26 by unknown men in front of his house in Qalansawe city.

A week earlier, two other violent crimes took place. On May 17, a man in Jaffa killed his two sisters, Noura and Hayat Moulouk, claiming they were dishonoring the family. On May 16, a woman in her 50s and her daughter were stabbed by an unknown person in Tiberias.

Violence and murder have run rampant in Palestinian communities in Israel. Naila Awwad, the director of the Association of Women Against Violence in Israel, blames the Israeli security institutions for these crimes. She told Al-Monitor, “The Palestinians live as a national minority in these areas and suffer discrimination and marginalization. We believe Israeli security institutions do not care about uncontrolled weapons and the pursuit and punishment of murderers.”

Awwad said that the murder of the Moulouk sisters could have been expected, because the killer had been in jail and was accused of violence and of being a threat to citizens. Local reports also stated that he had psychological problems, but the police ignored this and released him despite the family’s complaints about his fierce behavior.

Statistics collected by the Aman Center show that 25 murders among Arab Israelis have been reported since the beginning of 2018, including four murders in Jaffa in May, three of whom were women. In addition to the Moulouk sisters and Khatib, Rami Fatayarji was shot in al-Ajami neighborhood May 13.

Palestinian towns and municipalities within the Green Line are witnessing social and political protests against violence and the Israeli authorities’ slackening in fighting them. Dozens of political activists and civil society associations participated May 17 in a protest in Nazareth to denounce the violence against women. On May 6, a convoy of cars took off from the city of Umm al-Fahm toward the office of Israeli Prime Minister Benjamin Netanyahu in Jerusalem to ask him to fight crime and the spread of weapons.

The head of the Israeli Knesset’s Committee on the Status of Women and Gender Equality, Knesset member Aida Touma, told Al-Monitor that crimes run rampant in Arab villages and cities because the Israeli Police are unwilling to stop the criminals and investigate the crimes properly.

She said that 70% of murder cases that were committed in the past years in Arab communities in Israel have not been solved, with the perpetrators still at large.

Touma accused Israeli security forces of turning a blind eye to the spread of weapons, saying, “They do not want real weapons control because they know weapons are used against Palestinians. If they had any doubt weapons would be directed at the Jews, they would have turned our villages upside down to confiscate these arms.”

Touma added, “Gangs in Palestinian society attract youths to join their ranks because of poverty, unemployment and lack of job opportunities. Youths are lured to make a quick buck.”

Director of Aman Center Reda Jaber told Al-Monitor, “The Palestinian communities in Israel have lost control because they are part of an Israeli system and don't have any power to impose order. The Israeli authorities do not enter Palestinian towns [and neighborhoods in mixed Jewish-Palestinian cities] to eliminate crime and fight violence.”

Jaber added, “Organized crime gangs in society are deep-rooted, and they control part of our lives. They sometimes interfere to solve disputes between people to get money and social status. They have become influential and dominant.”