Iraqis have played board games for millennia, and a new generation of them are creating new ones steeped in Iraqi history with the hope of getting more of them to put down their screens and meet other players face to face. 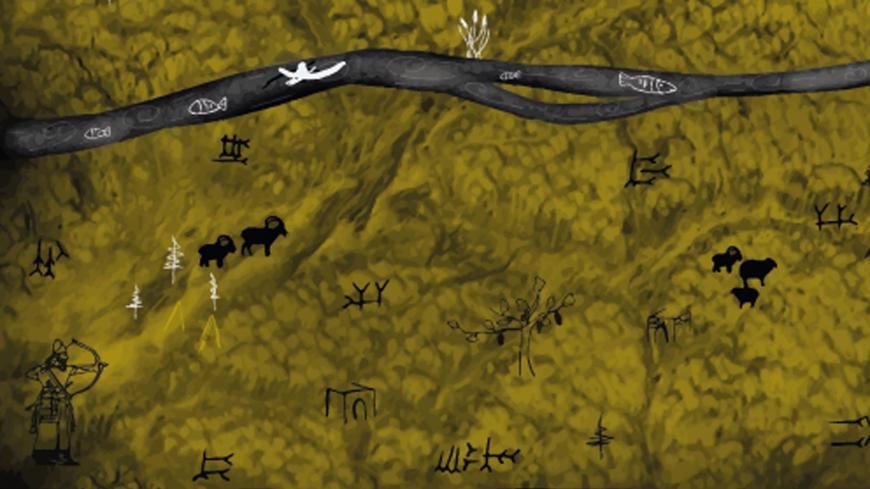 Artwork for the Iraqi board game Urbilum: The Assyrian Empire. - Facebook/urbilum

Iraqis love games. In every teahouse, one finds men of all ages slapping down domino pieces or praying for doubles over a backgammon board. Merchants take breaks from their establishments to play a few rounds of dama, a variant of checkers. In the evenings, families play the card game rummy into the wee hours.

In recent years, younger Iraqis have become addicted to online gaming, including Player Unknown’s Battlegrounds, or PUBG, pronounced “pub-gee,” for short. Iraq’s parliament was so concerned that in April it voted almost unanimously to ban a suite of online games due to their potentially negative influence on the young. Like elsewhere, however, the lawmakers' paternalistic policy approach made the online games all the more popular.

Lanah Haddad, an Iraqi Kurdish archaeologist, grew up in a family of gamers, but she eventually grew disillusioned with the games of strategy she was playing. Most of them were based on fantasy, but this clashed in her mind with the real richness of Iraq's heritage, which she had come to know through her excavations and other fieldwork. As she watched the Islamic State rip her country apart, Haddad decided to develop a strategy board game influenced by ancient Mesopotamia that could also positively impact Iraqi society.

“I thought a game could bring our culture closer to our community [today] … by bringing elements of Iraqi society closer to one another,” she told Al-Monitor.

The game she developed, Urbilum, was expected to go on sale this month. Iraq’s first modern strategic board game on the market, Urbilum pits two players against one another in a competition to build settlements. The first edition, Urbilum: The Assyrian Empire, focuses on strategy rooted in history. The players choose to be Sennacherib or Ashurbanipal, two of the empire’s most famous kings, and strive for supremacy, developing their empires through fortifications, temples and palaces.

Haddad tapped Ebdulla Abdulrahman, a local artist who goes by the moniker Rebel Kid, to render symbols of the Assyrian Empire for the playing pieces. Abdulrahman told Al-Monitor that developing the art for the board and the game cards came with the “unique challenge” of incorporating 300 years of Assyrian deities, relics and reliefs in simple-yet-striking visuals. All of the game materials are in Arabic, Syriac, Kurdish and English.

There is abundant information on the Assyrian Empire because the Assyrians left behind a written record on clay tablets that were rediscovered over the past 150 years. Even when invading armies set fire to the empire’s great libraries, the Assyrians' books were only “baked,” but not destroyed, “cause clay stays,” as Haddad pithily noted.

Urbilum makes use of inscribed steles of Assyrian kings, glazed bricks of temple walls, alabaster palace panels and cylinder seals and cult statues that depict Isthar of Erbil, the greatest god of the empire. This historical anchoring makes the game all the more appealing, reminding Iraqis where they come from and, according to Haddad, “how they can redefine their identity.” This shared heritage provides the basis for common ground.

The strategies Urbilum players must adopt derive from well-documented techniques used by Assyrian kings to expand their holdings. For example, if a player draws three cards from the soldier category, he or she can deport or swap the population of their opponent’s settlements. Population exchange was used historically to destabilize or to control restless areas. Haddad pointed out, however, that the technique continued to be employed into the modern era, for instance by the British Empire and more recently by Iraqi Baathists, in an Arabization campaign in the 1980s.

Ancient Mesopotamia birthed the first board game, the Royal Game of Ur, but despite the game's ancient past, it is brand new to Iraqis. The Royal Game of Ur, which dates back 5,000 years, had been one of the region’s most popular games before it mysteriously stopped being played. A direct ancestor of backgammon, which also originated in what is now modern day Iraq, the game was rediscovered in 1922, when a game set was found and ended up at the British Museum. Earlier this year, a group of volunteers associated with the University of Raparin, in Raniya, revived the Royal Game of Ur, creating a board and teaching locals how to play. These Ur enthusiasts are now promoting it across Iraq.

Hoshmand Afaq, the project’s lead artist, is amazed how much people have enjoyed playing the Royal Game of Ur. A once-avid domino player even told Afaq that he would cease playing all other games “now that there is a game for us by us.” Some players have even designed their own boards. “It adds a personal touch to a millennia old story,” Ash Barlow, an archeologist helping spearhead the initiative, told Al-Monitor.

Games such as Urbilium and the Royal Game of Ur can be engaging ways to promote critical thinking about different ancient Iraqi history. Durrah Alomar, an Iraqi designer and artist, presented her game Imperial Race earlier this year at the Global Grad Show, an exhibition in Dubai. “I wanted a fun medium for people to learn through, and I wanted my solutions to be here 50 years from now,” Alomar told Al-Monitor. “Board games are timeless.”

Imperial Race’s round board is based on Baghdad’s original layout as a city ringed by a circular wall. As players advance through the game, they are exposed to different inventions and ideas from ancient Mesopotamian cities. Such games made for Iraqis by Iraqis and invoking Iraq’s history are instilling national pride at a time of transition. “Although we Iraqis have had our differences since early days, greater awareness around our cultural heritage helps [us] understand the success of old civilizations, so we can take greater pride in our accomplishments,” Alomar said.

For now, most young Iraqis remain attached to their online games, which offer them thrilling, fantastic escapes from the mundane and enables those who feel isolated an opportunity to connect and compete with people all over the world. As Alomar remarked, “One of the best reasons for playing board games is personal interaction with other players.”

Alomar, Haddad and Afaq are organizing roadshows around the country to stake out space for socializing and to get Iraqis to put down their screens and to look at other players face to face. It looks like 2019 is shaping up to be the beginning of a golden age of board games in Iraq, with strategic games in particular experiencing a revival.