An Iraqi engineer leads his own mission to preserve Iraq's heritage in 3D reconstructions. 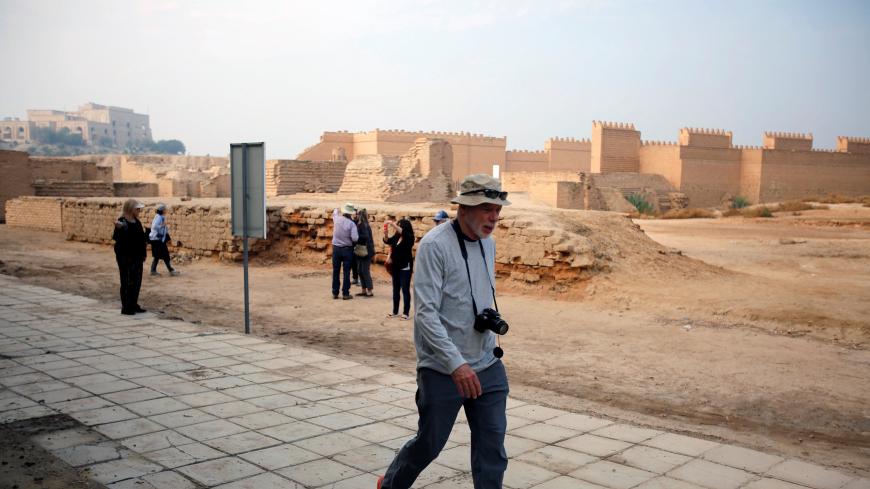 Over decades of modernization, poor restoration of ancient sites and fierce wars, Iraq has lost many of its monuments. What was once Mesopotamia's fertile ancient cities now lie in ruins surrounded by deserts, while Iraq's major cities lost their famous buildings and genuine architectural styles.

This led Paris-based Iraqi engineer and artist Kais Jacob Ishak to work on a cultural project preserving Iraq’s heritage through 3D reconstructions. With the three-dimensional designs strolls through the streets of ancient Babylon, Ur, Nineveh, Abbasid Baghdad and Ottoman Mosul have become quite possible.

"I was among the first Iraqis to buy a computer in 1985," Ishak told Al-Monitor. "I did my best to follow up on engineering software, especially the three-dimensional programs as I recognized their importance and future potential."

In the 1990s, he presented his first 3D work of Baghdad's Liberation Square in the National Center for Computers' annual exhibition.

Ishak's talent in paintings began early in his childhood.

"In 1969, the Ministry of Culture chose me to be the illustrator and editor of the 'Science for Children' pages in Majallati and al-Mizmar, Iraq's famous children's magazines at the time," Ishak said. "I worked with them for 10 years."

In 1970, Ishak held his first art exhibition at the French Cultural Center to be followed by five personal exhibitions at Baghdad's University of Technology. In the 1990s, he decorated three of Baghdad's Chaldean and Syriac Catholic Churches with 68 murals and metal works.

Taking notice of the negligence Iraq's heritage suffers from, Ishak decided to take action; he set out to document his country's various historical periods in a comprehensive way.

The chronicle of his work goes back to the Ubaid era's Tepe Gawra (around 3500 B.C.) and the Sumerian cities of Ur, Uruk and Eridu, between 3500 and 2000 B.C. His most recent works include Samarra's Abbasid Palace and the Great Mosque of Malwiyyah (836-892).

"In terms of area, my largest 3D work is Babylon in the time of Nebuchadnezzar II and Abbasid Baghdad," Ishak noted. "My computer is unable to load the work. This makes updates quite difficult. I will buy a new computer to handle the size of these big projects."

Many designers and artists use 3D designs for films, video games and documentaries. With the increasingly frequent terrorist attacks on ancient sites in Iraq and Syria, this field proved more important. Terrorists and fierce battles to drive them out resulted in the destruction of historical edifices. This has led many groups to work toward the preservation of the lost sites for the next generations, even if it was creating a virtual Palmyra and Mosul.

Instead of lamenting the destruction described by scholars as a "cultural genocide," Ishak responded by documenting the Assyrian capitals — Ashur, Nimrud, Nineveh and Dur-Sharrukin — as well as the alleys of old Mosul, its well-known Prophet Jonah Mosque, Hadba Minaret, the kingdom of Hatra and Tikrit's Christian sites.

New software and the advance in computers' storage and speed facilitate Ishak's mission.

"I can now work smoothly to present videos of complex cities of any time and take hundreds of photographic shots during different times and climates," he said.

Historically rich countries started to use these technologies to revive their heritage for educational, cultural and touristic purposes. The Turkish Byzantium 1200 launched a project to reconstruct the Byzantine monuments of Istanbul in the year 1200.

"Unfortunately, Iraq's Ministry of Culture lacks such awareness of history despite the fact that Iraq has given the world its first-known writing system, laws, wheel and urban cities," Ishak noted. "So I decided to work on my own to revive our neglected historical sites for educational, noncommercial or politicized purposes and without any support."

By posting his works on YouTube, Vimeo and social media, he attracted the attention of National Geographic, which contacted him in 2017 to use footage from his 3D reconstruction of Nineveh. They published it in the Spanish, Italian and Dutch editions of the magazine.

"I had no previous contact with any of their editors," Ishak added. "The same thing happened with the National Museum of Antiquities [Rijksmuseum van Oudheden] in Leiden [the Netherlands] where some of my reconstruction videos are on display."

In his work, Ishak seeks accuracy regarding architectural styles and urban plans. His study of history of architecture and talents in drawing, sculpture and photography helped him achieve this, besides relying on maps, old books and magazines from French public libraries and online databases. However, the Iraqi touch in the works is a priority for him.

"Studying foreign 3D reconstructions, I noticed how they lack the Iraqi character and sense regarding topography, atmosphere and nature," Ishak said. "This makes them unreal and this is why I am interested in presenting purely Iraqi works."

These 3D reconstructions can form an essential window on Mesopotamia's civilizations and its hidden gems in a way that can easily be perceived and understood by all, according to Ishak. "To build a glorious future for a county, its children must know their true history," he added.

Ishak criticizes the way history is taught in Iraq using dry curricula lacking illustrations. "It is almost limited to the Islamic era marginalizing more than 5,500 years of Iraq's ancient history," he noted. "Our students are taught 48 pages on Mesopotamia in first grade and that's it."

Ishak calls for showing two-minute videos of ancient cities in classrooms, so students can imagine and feel more passionate about what they study.

Documenting modern intact places might be a means of heritage preservation as modernization is rapidly changing the face of cities away from wars. So Ishak documents Baghdad's Royal Palaces, old churches, markets and streets as well as Nineveh's monasteries.

"Unfortunately, we live in overwhelming chaos," he said. "However, this does not give officials the right to ignore the rules used to regulate our cities' architectural designs and urban planning. If this continues, we will some day have cities lacking any peculiar character distinguishing them from others."

In its seventh year, Ishak's project has a long way to go.

"I have lots to do, documenting many neglected archaeological sites, apart from the treasures still waiting for scholars to excavate and unveil."