Iraqi's legendary copper markets, once centers of commerce and socialization, are now fading away, from Baghdad to Najaf. 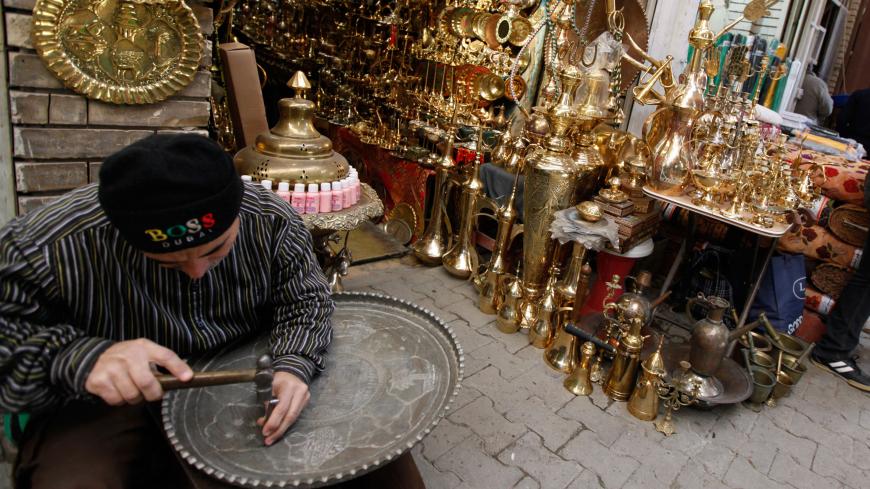 A vendor works on a copper item to be sold in a shop in Souk al-Safafeer, Baghdad, Iraq, Dec. 20, 2011. - REUTERS/Mohammed Ameen

Mohammad Hassan worries about the steady decline in the number of customers who come to his shop in Baghdad’s Souk al-Safafeer, the legendary copper market in the neighborhood of Bab al-Agha. The shop sports Hassan’s handmade copper products, mostly miniatures of Iraq’s symbols and monuments, such as the palm tree, the Lion of Babylon, the Malwiya Minaret in Samarra and Mosul’s Great Mosque of al-Nuri, which the Islamic State destroyed in 2017.

Hassan, who has been a coppersmith for 30 years, exercises a profession that dates to the Abbasid period of the 10th century, when many everyday goods, from lanterns to water bottles and from cups to knives and daggers, were made of copper. But those days are long gone.

“Industrial development has turned this profession into a business that only provides decorative objects,” Hassan told Al-Monitor in his shop in Souk al-Safafeer, which takes its name from the color of copper, “safra” in Arabic.

The situation is similar in all coppersmiths’ markets around the country. In Nasiriyah, a city on the banks of the Euphrates River about 370 kilometers (225 miles) southeast of Baghdad, the copper market, once an important place of commerce and socialization, is now almost nonexistent. The same goes for Mosul’s market, Basra’s Musa al-Attiyah market and Najaf’s Safafeer market, which are turning into mere memories.

Coppersmith Haider Khafaji told Al-Monitor that the famous Safafeer market in the southern province of Babil has now faded behind the modern shops, but in the past it was packed with tourists who would head there after visiting the nearby historic city of Babylon about 20 kilometers (12 miles) away.

Khafaji said, “I started working in this profession 40 years ago, back when there was significant demand for copperware, when copper was an important commercial commodity and copper goods were a sign of status.” He added that there are just a few coppersmith shops left and most double now as blacksmiths.

“Our work today is limited to making gifts and souvenirs that hardly ever get sold,” Khafaji added. “We seriously fear that this craft will disappear, as the new generation is not keen to learn the craft.”

Member of parliament Maysoon al-Damluji, a member of the legislature's committee on culture, told Al-Monitor that the days when people used copper in most of their daily goods are gone, but that the craft of the coppersmiths, part of the Iraqi intangible heritage, should be maintained.

“[The coppersmith shops and markets are part of] the identity of Iraqi cities,” he said, expressing concern that Iraq's cities, which have been badly damaged in the wars and battles that have taken place in Iraq and have been subject to poor urban planning, have lost their historical heritage.

Damluji said one of the reasons copper markets are disappearing is the “law issued by the Ministry of Health in the 1950s preventing the use of copper utensils for eating, as it causes poisoning.”

Another reason, according to Damluji, is related to “the unstable security and political situation in Iraq, as the Iraqi state has allocated its budget for wars since the 1990s, leaving no room for projects to preserve cultural heritage.”

Ibrahim Khalil al-Alaf, professor of modern history at the University of Mosul, told Al-Monitor that the craft was also disappearing because local and handmade goods were unable to hold their ground against foreign copper miniatures of Iraqi monuments that flood the markets and are sold at lower prices. These come from China and the government has no regulation or subsidies to protect the local products. “The Safafeer market in Mosul has been in steady decline,” he added.

In many Safafeer markets, coppersmiths themselves have begun trading in imported goods, no longer relying on creating their own. Given the lack of financial support from the government for this dying profession and the reluctance of the new generation to master this craft in which profits are low, coppersmiths are becoming a part of disappearing intangible heritage.

Alaf said he deeply regrets how Mosul’s heritage has been falling apart before his eyes. “We need to preserve historical monuments using modern restoration techniques and learning from the experience of developed countries in urban and market planning,” he said.

“The Directorate of Heritage and Antiquities should develop a comprehensive national strategy and cooperate with the United Nations Educational, Scientific and Cultural Organization because the Safafeer market in every city is not only a market but a museum preserving this profession and all Iraqi handicrafts,” Alaf said.

Meanwhile, Amran Obeidi, the director of media and spokesman at the Ministry of Culture, told Al-Monitor that the ministry believes preserving Baghdad's Safafeer market, the largest of the copper markets in the country, does not fall under its responsibilities according to laws and regulations in force. “Maintaining the Safafeer market is Baghdad municipality’s job. Our work in the ministry is only limited to technical consulting,” he said. “The Safafeer markets are Iraq’s cultural introduction to the world, as well as they showcase a now rare profession that has long been part of the Iraqi folklore.”

Obeidi said the ministry classified Rashid Street, at the end of which the Safafeer market in Baghdad is located, as a historical area, so any change in buildings there requires the ministry’s approval. “It is particularly important to preserve this market because it specializes in creating cultural handicrafts,” he said.

Hakim Abdul Zahra, the director of media and public relations in the Baghdad municipality, told Al-Monitor that the city is trying to ensure that the old markets do not disappear. Some store owners try to reconstruct the historical stores and turn them into another business, which is illegal. “We have plans, in coordination with the Heritage Authority, to repair and restore houses and ancient markets as soon as our financial situation improves,” Zahra said.