A handful of enthusiasts are trying to save Iraq's age-old melodic system known as maqam, which was placed on UNESCO's Representative List of the Intangible Cultural Heritage of Humanity in 2008. 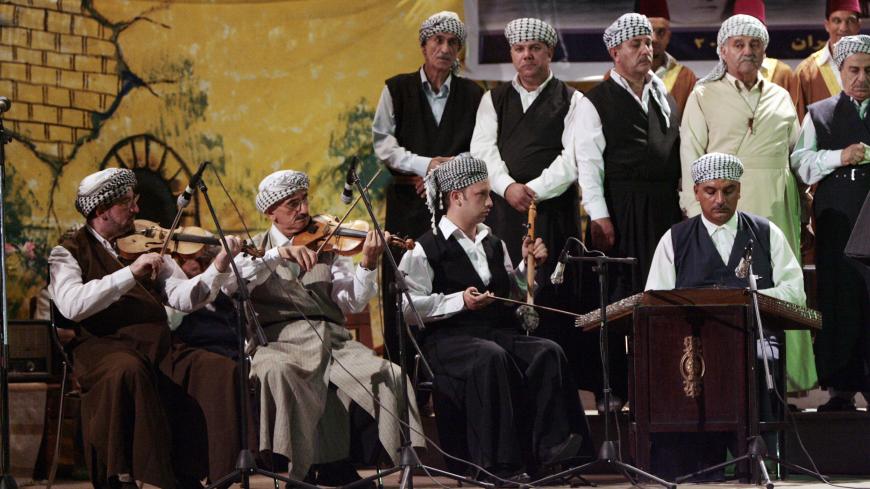 Rooted in classical and colloquial Arab poetry and embracing a wide repertoire of melodies, the Iraqi maqam is considered a symbol of the musical history of Iraq and the Middle East. Inscribed in UNESCO’s Representative List of the Intangible Cultural Heritage of Humanity in 2008, the Iraqi maqam is still alive, whereas many Arab musical styles in the region have either disappeared or become Westernized over time.

Yet the future does not look too bright for maqam either, particularly if the Iraqi government does not adopt policies to revive and strengthen this musical style played with traditional Iraqi instruments and strong vocals.

“The government authorities have neglected this ancient art, and all the activities that are being held today are based on individual efforts,” Ismael Fadel, an Iraqi maqam singer residing in Australia, told Al-Monitor. Fadel established a musical band to perform maqam in Australia, and it has performed in Britain and Israel as well.

Fadel said there are still many maqam experts — singers, musicians and researchers — in Iraq and abroad who try to maintain this traditional music, as well as an audience who wants to attend maqam concerts. The younger generation in Iraq is not exposed to maqam music, as few maqam concerts are broadcast on Iraqi TV. “The younger generation is unaware and does not listen to maqam music … because satellite channels have neglected it, [choosing instead] to broadcast mediocre songs associated with commercial rather than cultural projects.”

A link between the people in Iraq and those who have been displaced or left the country long ago, maqam is also symbolic for the Iraqi Jews who still play maqam concerts, even in Israel.

In this context, Linda Menuhin, a producer and former journalist based in Tel Aviv who fled Iraq in the 1970s, told Al-Monitor that she established in 2003 Kanoon, an organization that promotes Iraqi music and arts in Israel.

She told Al-Monitor that Kanoon spreads the songs and values of the Iraqi-Jewish community. “These maqam songs entrench the values ​​of beauty, peace and love, especially among Arabs and Jews. We meet — both Arabs and Jews — during the Galgi Baghdadi evenings where we make music and listen to our common heritage, which are organized as part of the program called Baghdad Coffee Shop,” she said.

In reference to a music group called Sidara band, she noted, “[They] perform Iraqi maqam songs for Arabs and Jews in Israel and bring the public back to its distant roots.”

Young amateur maqam artists in Iraq are trying to bring this cultural heritage to the attention of the public and cultural elite. Mohammed Sajad, an amateur maqam singer, told Al-Monitor, “My work is based on a personal effort aimed at encouraging young people to learn the art of maqam amid the massive spread of modern mediocre songs with quick rhythms.”

Sajad is concerned about compromising the eminence of maqam. He said, “Along with a group of maqam pioneers — most notably Hamed al-Saadi — we, the younger generation, refuse to hold concerts in nightclubs, despite the financial hardships plaguing maqam artists.”

He added, “There are barely five young maqam artists, which makes it difficult to benefit from the maqam pioneers in Baghdad. The Baghdad-based Bayt al-Maqam al-Iraqi [House of Maqam of Iraq] is unable to function because it is not receiving much support, and it has turned into a state-run enterprise plagued by routine,” he said.

The cultural evenings organized by the Department of Musical Arts of the Ministry of Culture, in coordination with Bayt al-Maqam al-Iraqi, a nongovernmental organization promoting Iraqi heritage music, are regarded by Saadi, a prominent maqam pioneer, as “insufficient.”

“[Our musical heritage] is fading and these evenings are only organized occasionally. There is no systematic strategy to have the media, especially satellite TV, focus on it,” Saadi told Al-Monitor.

He said that what proves this art is vanishing is the “lack of traditional classical instruments used in maqam, such as the riq [type of oriental tambourine] and the rubab [lute-like instrument]. These have been replaced by modern instruments.”

He also criticized “the government's neglect and the lack of maqam teaching in schools, technical institutes and universities.”

Ibrahim Alssalim, a music researcher who has years of experience in teaching Iraqi maqam and who has worked as a voice coach, music player and composer since 1989, told Al-Monitor, “Bayt al-Maqam, founded in 1985, was the first step toward reviving the maqam but this project relapsed due to fading governmental attention as the state was preoccupied with the war efforts during the Saddam Hussein regime and after 2003 — and interest in musical arts, especially maqam, disappeared.”

“Maqam is a difficult art that requires talent and a lot of training. All current activities are individual, voluntary and unsupported by the state,” Alssalim said, citing the efforts of some representatives of Iraq abroad who organize maqam concerts at their residence.

Iraqi artist Mohammed Hussein Kamar, a resident of the Netherlands famous for performing maqam with his wife, told Al-Monitor, “I completed the project of documenting the art of the Iraqi maqam thanks to my extensive experience as a rubab player and because I have accompanied senior maqam artists in the past. I also worked as a teacher at the Iraqi Institute of Musical Studies for about 40 years.”

A spokesman for the institute told Al-Monitor via Facebook, “The curriculum focuses on teaching maqam along with other music sciences. They also teach students musical instruments to preserve the musical heritage.”

Maysoon al-Damluji, head of the parliamentary Media and Culture Committee, told Al-Monitor, “The financial and security conditions have stopped many cultural projects, including the development and dissemination of the Iraqi maqam.”

She added, “In the coming period there will be an opportunity to support Bayt al-Maqam as well as to provide job and development opportunities for singers and musicians. The plans also include the promotion of a strategic methodology for teaching this art in schools and specialized institutes."