Despite Washington's willingness to keep its troops in Iraq after withdrawing them from Syria, Baghdad has told the United States to get them out in short order. 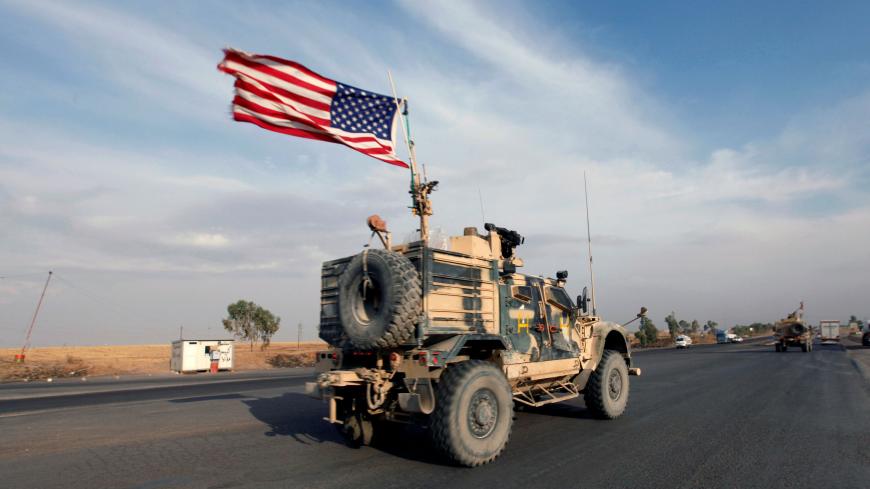 After withdrawing from northern Syria, a convoy of US vehicles is seen in Erbil, Iraq, Oct. 21, 2019. - REUTERS/Azad Lashkari

Despite Washington’s announcement that US troops withdrawing from Syria would help protect the Iraqi border from Islamic State infiltration, the Iraqi army said in an Oct. 23 statement that the presence of these forces is temporary and that they must leave the country soon.

Iraq's statement reflects the confusion caused by the military operation Turkey launched Oct. 9 in areas of eastern Syria controlled by Kurdish forces. Based on contradictory social media posts, it appears Baghdad and Washington did not coordinate in advance about the future of the withdrawing troops, or the fate of thousands of IS detainees held by the Kurdish-led Syrian Democratic Forces (SDF).

US Defense Secretary Mark Esper had said his country’s troops would continue to carry out operations against IS on the Iraqi side of the Syrian border to prevent IS from reemerging. According to Esper, more than 700 soldiers have been moved from Syria to Iraq, while 200 to 300 US soldiers remain at the al-Tanf border point with Iraq and Jordan in southern Syria.

But Esper said during his Oct. 23 visit to Baghdad that these troops from Syria will leave Iraq at the request of the Iraqi Ministry of Defense.

Esper’s remarks seemed to change after he met with Iraqi Prime Minister Adel Abdul Mahdi, who has openly refused to keep additional US troops in his country and said his government had not granted any permission for US troops withdrawing from Syria to remain in Iraq. He added that the government is taking legal measures and has requested assistance from the United Nations and the international community to this effect.

US forces entered western Iraqi Kurdistan, then moved south to the US-Iraqi military base of Ain al-Asad in Anbar province. That movement violated an earlier statement by the Iraqi war media department that “all US forces that withdrew from Syria obtained permission to enter the Kurdistan region only to move outside Iraq.”

Many Iraqi parties, however, are skeptical that the United States intends to honor that restriction. Karim al-Mohammadawi, a member of the Iraqi parliament's Security and Defense Committee, said the US forces that entered Iraq plan to stay longer. “The timing of the withdrawal of these forces from Syria and their entry to Iraq means transferring the battle against IS inside Iraq,” he told Al-Monitor.

“The US is trying to take advantage of the unstable internal situation in Iraq to impose a new fait accompli and increase the number of its troops to put pressure on Iraqi authorities, who are trying to maintain security in the country, and to try to block the [proposed] law [requiring] the US troops' withdrawal,” he added.

Some Shiite blocs — led by the Fatah bloc — in the Iraqi parliament have been seeking for more than a year to approve a law to expel foreign forces from Iraq. But executive authorities have rejected this proposal, saying Iraq still needs US military support.

Al-Monitor learned from various parliamentary sources that the blocs opposing the US presence are submitting a request to the parliament presidency to discuss repercussions of the Turkish operation in eastern Syria and the withdrawal of US troops into Iraqi territories. The blocs seek to issue a binding decision for the government to remove these forces by a specific time.

Parliament member Abbas Yaber told Al-Monitor, “The government is obliged to clarify the role of US forces coming from Syria into Iraq to parliament and reveal the recent agreement to get them out on time.”

Iraqi fears are not limited to the problems that may be caused by the new US forces. The Turkish operation in northeastern Syria and the withdrawal of US forces from Syrian border areas allowed dozens of IS members to escape Kurdish forces' prisons into Iraq.

Some leaks indicate the Iraqi government is considering European and American proposals to receive IS fighters from different Syrian areas and prosecute them in Iraq in return for huge financial aid. Those who oppose this proposal have held up the necessary approvals for this deal so far. Iraqi authorities also want such trials to be conducted in accordance with Iraqi law, which some European countries reject, as they want to establish an international tribunal in Iraq for this purpose.

Many Kurdish-held IS prisoners could escape because of the ongoing battles east of the Euphrates. If Baghdad refuses to accept some of these prisoners before that happens, and the United States doesn't protect Iraq's borders, the western areas of Baghdad would be exposed to new IS attacks.

That would further complicate the already-tense situation in Iraq. Iraqi parties seeking to pass the proposed law to have foreign troops leave then could take the opportunity to accuse the United States of failing to secure the border and pressure the Iraqi government, which does not want new tensions with Washington.