Varying head counts of US forces in Iraq stir controversy

It's hard to nail down how many US troops are in Iraq, but some Iraqi political factions say any number is too high. 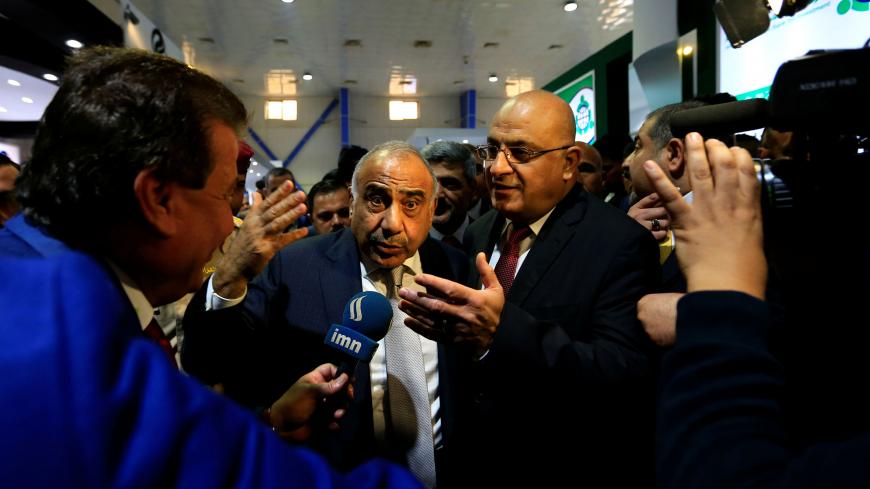 BAGHDAD — There's a discrepancy over how many US troops are still in Iraq, and whether they are welcome.

US Secretary of State Mike Pompeo recently estimated there are 5,000 American troops in Iraq and said there are no plans to remove them. However, that number is under scrutiny, in part because the United States has said it won't publicize such figures, and the Pentagon has removed from the internet official statistics on troops in Iraq and Afghanistan. Also, other groups have different estimates.

Iraqi Prime Minister Adel Abdul Mahdi estimates there are 6,000 American troops in Iraq, compared with 7,700 a year ago — just after Iraq declared the Islamic State (IS) was defeated there. His Jan. 14 announcement, however, failed to satisfy some parliamentary blocs seeking "real," definitive statistics on the numbers of foreign forces, their missions and their deployment areas.

The Iraqi government favors keeping some US troops in the country for training and support. But some opposition blocs want the troops gone; others want to monitor their number and roles, in part to prevent the United States from establishing permanent military bases there to counter Iran's influence and maintain access to Syria.

Also speaking up on the matter is Asaib Ahl al-Haq leader Qais al-Khazali. The Associated Press reported on Jan. 28 that Khazali implied US troops could be forced out of the country if they don't leave. Asaib Ahl al-Haq is the Shiite paramilitary wing of al-Sadiquon political bloc, and it has ties with Iran.

Some major parliamentary blocs have sought for weeks to pass a law to remove all foreign forces — mainly targeting US troops — from Iraqi territories. The Fatah Alliance, the State of Law Coalition and the Sairoon Coalition are behind the bill, but the government has yet to configure a map of how foreign forces are distributed and their expected date of departure.

Laith Shubar, an Iraqi politician close to the prime minister, told Al-Monitor, “The number Abdul Mahdi announced is real and close to the figure revealed by US Secretary of State Mike Pompeo on his recent visit to Egypt, where he pointed out that US forces in Iraq number about 5,000.”

Shubar, who heads the Kafaat Bloc, added, “The number of US troops in Iraq had been a mystery under the governments of Nouri al-Maliki and Haider al-Abadi. Today, this figure has been announced by the official authorities to clearly identify their advisory functions.”

He believes that Abdul Mahdi’s government is likely to take steps to “reduce the number of US troops in accordance with the tasks entrusted to them, which is mainly support and training, so as not to turn Iraq into the center of conflict between Tehran and Washington.”

Yet Adnan al-Asadi, head of the parliamentary Security and Defense Committee, said in a press conference Jan. 19, “The number of US troops on Iraqi territory remains unknown so far." He added, “The committee had sent an official letter to Prime Minister Abdul Mahdi, asking him to inform us of the number of these forces, the number of American bases [and] the legal grounds for their ongoing presence. We're still waiting for an answer.”

Meanwhile, al-Sadiqoun parliamentarian Wajih Abbas said in a Jan. 14 statement to al-Sumaria TV news that the number of American soldiers in Iraq is 9,000. He stressed the need for parliament to intervene to reduce that number to a maximum of 3,000 forces, with specific tasks.

Talk of reducing the number of US troops in Iraq has begun to overshadow support for the draft law on removing foreign forces. The bill is backed by the Shiite blocs, sensing the US desire to remain for a longer period of time. This is especially true following US President Donald Trump's statement Dec. 26 from Ain al-Assad base in Anbar, when he said he has no plans to withdraw American forces from Iraq, a week after he announced a surprise pullout of US troops from Syria.

This draft law is unlikely to pass, as it's rejected by Kurdish and Sunni blocs, not to mention the Iraqi government's desire to maintain US support and training. The Iraqi government is avoiding any confrontation with the American administration, which warned against the consequences of passing such a bill.

State of Law Coalition member Alia Nassif said, “Parliament ought to address Prime Minister Abdul Mahdi and the military commanders to identify the real number of foreign troops in the country and the tasks they are carrying out.”

She told Al-Monitor, “The security agreement signed between Baghdad and Washington in 2008 stipulated the withdrawal of US troops from the country by the end of 2011. Any subsequent deployment of such troops would be for training or advice only. It is the right of parliament, which ratified this agreement, to follow up on its implementation and any breaches that might take place during the execution phase.”

The parliamentary blocs that had armed factions fighting in the Popular Mobilization Units — such as al-Sadiqoun and its Asaib Ahl al-Haq — have intelligence on the actual numbers of foreign forces and their deployment areas. Consequently, this debate will drag on, unless the government offers irrefutable evidence that the United States doesn't have large combat forces on Iraqi soil.

US forces exited Iraq in 2011 only to come back in 2014, at Iraq's request, because of the emergence of IS. In 2016, there were about 3,800 to 5,200 Americans in Iraq, including trainers, experts, military advisers, security officers and special task forces.

Abdul Mahdi also said at his Jan. 14 news conference there were 11,000 total foreign troops in Iraq, including the 7,700 Americans, at the end of last year. That overall number dropped to 8,000 as of last month, with the 6,000 Americans, he added.