Will Iraq reemerge as battleground between the US, Iran?

Iraq is primed to emerge as an area of mutual Iranian and American influence, although Tehran does not appear keen to initiate a direct confrontation. 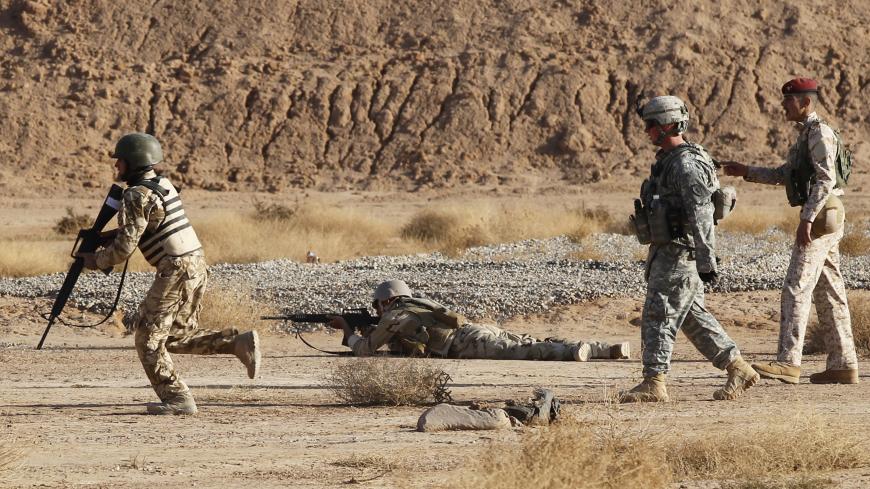 A US soldier (2nd R) watches Iraqi soldiers firing at targets during a training course at a military base close to the Iranian border, Dec. 21, 2010. - REUTERS/Mohammed Ameen

As the Trump administration’s decision to designate Iran’s Islamic Revolutionary Guard Corps (IRGC) as a "foreign terrorist organization" comes into action, eyes ought to be on areas of common influence, where both Iran and the United States are present and active, whether politically or militarily.

And while countries such as Lebanon, Syria and Afghanistan are emerging as potential fields of confrontation — directly or by proxy — Iraq remains perhaps the most ripe and ready of fronts given the US military presence and also the level of Iranian influence, which goes beyond individual groups and militants to the heart of the Iraqi military establishment.

The fall of Saddam Hussein’s regime following the US-led invasion of Iraq in 2003 created a vacuum that both the United States and Iran have sought to fill over the past 16 years. The complications of the new Iraq involve its transformation into a space of common Iranian and American influence — and also a struggle that has become a war by proxy, mounting as the differences between the two countries grow.

The rapid rise of the Islamic State (IS) in 2014 created a rare opportunity for both Tehran and Washington to indirectly cooperate in their battle against terrorism in Iraq. Yet, as IS fades as a common challenge, the rules of the game are once again changing.

Iran’s view of Iraq has changed gradually during the last decade. Allies of the Islamic Republic are more trained and organized than they were in the early days of the US occupation. Besides, it is becoming increasingly obvious that the era of Iranian influence in post-IS Iraq is completely different than it was before.

As recently as April 7, Iran’s Supreme Leader Ayatollah Ali Khamenei openly called on Iraqi Prime Minister Adel Abdul Mahdi — who was on his first trip to Iran since taking office — to push for the expulsion of US troops in Iraq as soon as possible. "You must make sure that the Americans withdraw their troops … as soon as possible because expelling them has become difficult whenever they have had a long military presence in a country," Ayatollah Khamenei was quoted as saying.

The Iranian supreme leader’s comments came just a few hours after media reports emerged that the United States was about to officially designate the IRGC as a foreign terrorist organization. Prime Minister Abdul Mahdi's reaction came soon after. Barely back from Iran, he stated on April 9 that "Iraq tried to stop the decision" and also warned that the designation "could have negative repercussions on Iraq and the region."

“Ayatollah Khamenei was backing a motion in the Iraqi parliament that is calling for the cancellation of all the military agreements with the US,” Iranian foreign affairs analyst Emad Abshenas told Al-Monitor. He added that while Iran’s allies in Iraq are pushing for such a move, the Iraqi parliament and government are not yet on board. Back in February, Iraqi parliamentary speaker Mohammed al-Halbusi announced that the parliament was discussing the redistribution of US forces in the country.

It is also important to note that Iran’s allies in Iraq have issued several warnings to the United States in past years. Qais al-Khazali, a longtime strongman in Iraq and head of Asaib Ahl al-Haq, said Jan. 29 that he expects a vote in the coming months by lawmakers calling for the withdrawal of US troops, highlighting the the rivalry in Iraq between Iran and the United States.

Khazali, who was detained for three years during the US occupation of Iraq, represents a strong image of Iran’s Iraqi allies: His group is armed to the teeth, and so are other groups like his.

During the Syrian war, Iraqi groups such as Khazali’s Asaib Ahl al-Haq, along with Hezbollah al-Nujaba and Kataeb Hezbollah, all fought alongside the IRGC’s Quds Force and Lebanese Hezbollah. Indeed, these groups played an important role in the battles and were active in areas such as Aleppo, the Sayyida Zeinab district south of Damascus and, in the last three years, on the Iraqi-Syrian border.

While those Iraqi groups were present in Syria, the IS blitz in Iraq — and the prompt Iranian response to it — created a useful pretext for Iran's other ideological allies in Iraq to join the newly established Popular Mobilization Units. Indeed, the fight against IS was a rare opportunity to wake up sleeper cells and train, mobilize and organize within a new paramilitary body that would later become part of the Iraqi state’s armed forces.

The US military presence in Iraq is far smaller than in the years following the invasion, with President Donald Trump commenting on Feb. 3 that he is keeping troops in Iraq “to watch Iran.” Now, following the new IRGC designation, pro-Iran factions in Iraq may see such statements as acts of aggression by the United States.

Meanwhile, Iranian officials decline to comment on whether Iraq or any other theater where there is mutual Iranian and American influence might witness the next confrontation between the two sides. Hossein Amir Abdollahian, the former Iranian deputy foreign minister, told Al-Monitor that the Trump administration’s designation of the IRGC as a foreign terrorist organization proves the US president's “full madness” — and that it needs to be treated. Abdollahian added, “Avicenna taught us the cure method centuries ago. With Iranian strength and wisdom, we will diminish Trump's hopes and compel him to bow down before the great nation of Iran.”

While there is no clear indication where tensions may arise, Iranian analyst Abshenas told Al-Monitor that he does not see any signs that the Iranians are seeking confrontation, unless they are pushed toward it. Abshenas explained that there are many reasons to anticipate incidents in the Persian Gulf due to the lack of communication between the two sides. However, he expressed less concern that Iraq or the Persian Gulf might be the arena of any coming escalation. “I keep my eyes on the Golan," he said, "because allies of Iran have all the pretexts to attack Israel there following Trump’s earlier announcement" of US recognition of Israeli sovereignty over the Syrian territory.