Families and friends of the dozens of protesters from Baghdad’s Sadr City killed in the recent protests say they doubt reforms announced by the prime minister will significantly affect the current situation. They warn that protests will continue unless they see real change. 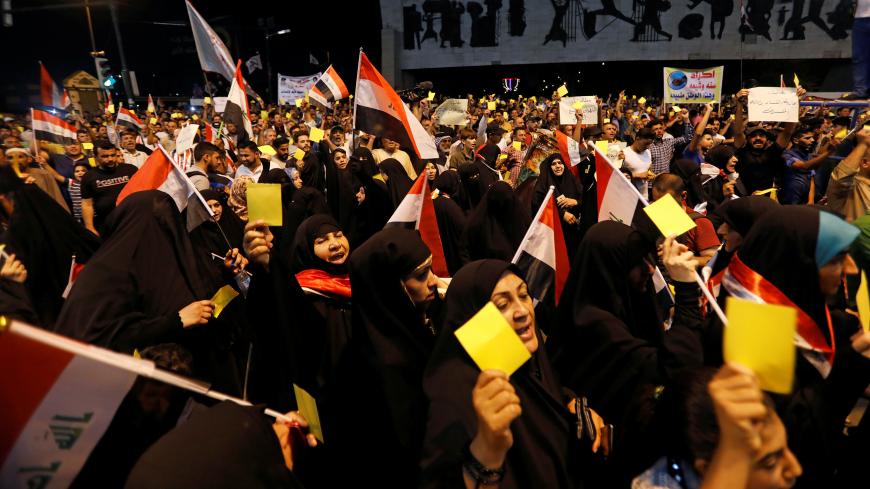 Supporters of Iraqi Shi'ite cleric Moqtada al-Sadr hold a yellow card which means the last warning, during a protest against the poor performance of parliament and government, Baghdad, Iraq, Jun. 21, 2019. - REUTERS/Khalid al-Mousily

BAGHDAD — In eastern Baghdad’s narrow, unpaved streets, girls frocked in school clothing rush by and women swoop in and out of doors in all-covering black abayas, as mourning continues for the dozens killed here in the recent protests.

Over 100 people lost their lives, many reportedly shot in the head and chest, and several thousand were injured in the protests that began on Oct. 1.

The protests have lulled for the moment, in part due to the Arbaeen religious pilgrimage.

Poverty-stricken Sadr City was hit by some of the worst violence to affect almost exclusively young men and boys taking to the streets to demand jobs, the provision of government services and an end to corruption.

The area was a wellspring of support for the Sairoon Alliance, which placed first in the 2018 elections.

Victims’ friends and relatives vow to continue protesting until a drastic change is effected concerning how the country is run and how resources and jobs are distributed.

Al-Monitor spoke Oct. 9 to friends and relatives of those killed from various parts of Sadr City, including a 21-year-old man named Mohamed and an 18-year-old with the same name.

The mother of the older Mohamed — who goes by Umm Mohamed, Arabic for Mohamed's mother — said she lost both of her sons in battles for the country: the first as part of the Popular Mobilization Units (PMU) in the fight to liberate Mosul from the Islamic State (IS) when he was 17; the second, her 21-year-old son, was killed in the protests in early October.

The existence of the two sons is marked in her living room with "martyr" photos, a black diagonal slash across one corner.

“Hussein,” the first son killed, she said, “died defending the nation,” and Mohamed died “because there are no rights in this country.”

“We just want justice. There is no justice here,” she said, vowing “protests will continue — even the women will take to the streets.”

Unlike the Arab Spring protests that broke out in 2011 in such countries as Tunisia, Syria and Egypt, almost no women were seen on the streets or in videos of the protests.

“We used to get everything in government rations. We had rice and sugar and tea” during previous decades, Um Mohamed said, but the post-Saddam government “stopped this and created many useless committees,” leading to excessive bureaucracy and endless, corruption-encouraging authorizations.

“They now give us rice with insects and oil that smells,” she said, adding, “How can they think that there will not be a revolution after this? This is the revolution of hunger.”

“They were warned before,” she said, implicitly referring to protests in previous years.

“We used to have factories where young men could work. Now they graduate from university and still can’t find a job, “ she said, adding, “There are no jobs unless you join a militia or the military.”

Hussein had been with the PMU in the 20th Brigade of Liwa al-Taff, she said.

He was 14 when he joined the PMU “to defend the nation. He took part in all the battles — Fallujah, Jurf al-Sakr, Kirkuk,” she said, “but he never got any salary.” He was 17 when he was killed.

The woman said both she and one of her three daughters have diabetes, a common ailment in Iraq fostered by a diet high in cheap sugar and rice, and that her husband was also ill. They can afford neither a home of their own nor necessary medicine, she said.

They live in a flat shared by several families in one of Sadr City’s vast low-rise blocks inhabited by an estimated 2 to 3 million people.

Her 21-year-old son, Mohammed Habib Abbas, was “the first martyr in the Tahrir Square protests” prior to when they spread to Sadr City, Um Mohamed said.

“I don’t know who killed him. They had their faces covered, but their language wasn’t ours. They were not Arabs,” she said, but possibly Iranian — according to friends with him at the time.

“They weren’t like Iraqis. They were very large,” Um Mohammed said, “and the bullets they used were explosive,” causing severe internal injuries.

In an interview earlier in the day with a 23-year-old photographer named Hussein, also from the area, Al-Monitor was told the protesters had proof that Iranian nationals and Saraya al-Khorasani were involved.

A 23-year-old man and close friend of a murdered 18-year-old protester who is from another sector of Sadr City told Al-Monitor Shiite cleric Muqtada Sadr, revered by many in the area, had “told us to take to the streets but as Iraqis and not as Sadr supporters,” but that the youths were killed with impunity precisely because they had no powerful men backing them.

The 23-year-old, who asked that his name not be used, said he doubted any of the announced reforms would actually affect the situation.

This deceased young protester’s family did not want to speak to journalists. Amid an internet shutdown, the streets were awash in rumors of journalists and protesters’ family members being threatened.

A rusty, dilapidated taxi with jammed windows was hailed by Al-Monitor from the edge of Sadr City toward another area.

Along the road were posters extolling the virtues of various PMUs, and a banner with Kata'ib Hezbollah insignia hung on the overpass.

The driver asked Al-Monitor what the situation was in Sadr City, eager for information given the internet shutdown. He whipped out his phone and showed videos from a Baghdad bridge and streets in which gunfire was virtually nonstop.

Youths in jeans and sneakers with their mouths covered to protect from tear gas — many with their T-shirts removed — hid behind buildings and dragged injured peers out of the line of fire in the footage.

The most common complaint seems to be the unequal distribution of resources and excessive bureaucracy fostering misuse of power.

Many of the people Al-Monitor spoke with, however, cited a belief in the generosity of “real Iraqis.”

Some said the current politicians should not be considered Iraqi since “their children all study and live in Europe or the US,” one said angrily.

After Um Mohamed’s younger son died in Mosul, she said, he was buried in Najaf’s Wadi al-Salam, the largest cemetery in the world and where specific sections are allocated for PMUs.

When she didn’t have money to return to Baghdad afterward, a “real Iraqi” helped her, she said.

Whether the announcement of reforms will serve its intended purpose will likely be seen after internet access is fully restored and the religious holiday is over.