Why Iran's grand ayatollahs are fighting over Rumi

Two grand Ayatollahs have declared their opposition to production of a movie about the celebrated poem Rumi and his friend and mentor Shams al-Tabrizi, but it is not clear whether they can stop it. 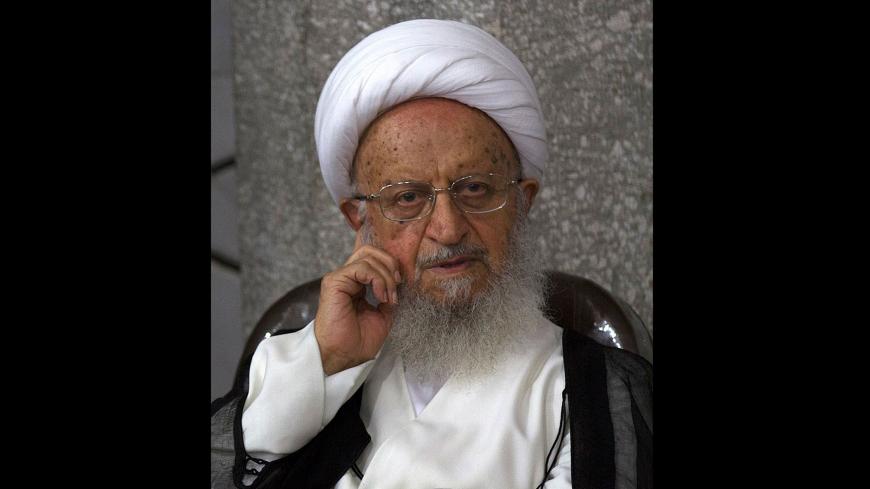 Plans to make a movie about Rumi, a 13th-century Persian Sufi poet, have once again revived an old quarrel between two currents among Iranian clerics — one that celebrates him as a great mystic and another that opposes his teachings as deviation and heresy.

Jalal ad-Din Muhammad Rumi, known in Iran as Mowlana, was born in 1207 in Balkh, which was situated in Iran’s greater Khorasan then but currently within the borders of Afghanistan. When the Mongols invaded Iran, Rumi’s father, a theologian, jurist and a mystic, fled. He traveled across the region and finally settled in Konya, a city in today’s Turkey. Rumi followed in the footsteps of his father; after attending seminary schools, he also became a highly respected mujtahid — a cleric able to deduce jurisprudential rulings — and had a strong following.

While in his forties, Rumi met Shams ad-Din of Tabriz — known as Shams al-Tabrizi — a wandering philosopher and poet who later became Rumi’s mentor. The friendship that developed between the two men and the strong influence of Shams on Rumi displeased Rumi’s friends, followers and family and they eventually forced Shams away. Some accounts said Shams was killed by one of Rumi's disciples. His mentor’s absence drove Rumi further to the mysticism known as Sufism, philosophy and poetry for the rest of his life. After he died in Konya in 1273, his mausoleum there became a shrine, with an annual festival attracting Sufis from around the world.

Now, nearly 750 years after Rumi's death, award-winning Iranian director Hassan Fathi, known in Iran for the hit series “Shahrzad,” announced Sept. 22 that he would produce a movie titled “Drunk on Love” about the much-speculated relationship between Rumi and Shams. The role of Shams is to be played by Shahab Hosseini, who was named best actor for his role in Asghar Farhadi’s “The Salesman” at the Cannes Film Festival in 2016.

The project is to be an Iranian-Turkish production. Fathi and Farhad Tohidi are co-writing the screenplay. Iran producer Mehran Borumand and a Turkish producer who has not been publicly named will collaborate on the project. The shooting will be done in Konya.

But two powerful ayatollahs in Iran would like to see the project nipped in the bud, saying Sufism is a deviation from Shiite Islam and any attempt to promote or spread it with a movie would be "haram" — forbidden by religion.

On Sept. 24, Qom-based Grand Ayatollah Naser Makarem Shirazi called the production of the movie “haram” (forbidden). This was echoed by Ayatollah Hossein Nouri Hamedani, also of Qom, who said that producing such a movie would help spread "a deviation" from Shiite Islam.

The government, however, did not take the same line. The country’s culture minister, Abbas Salehi, a cleric who doesn’t wear a turban, told reporters after the Sept. 25 Cabinet meeting that while the opinions of marjas — the highest Shiite authorities — should be respected, “the country has its own laws.” This was taken to mean that the making of the film would not be prohibited because of the objections. So far, there are no indications that the movie is being obstructed by Tehran.

Meanwhile, an old video was surfaced on media outlets showing Supreme Leader Ayatollah Ali Khamenei giving a speech in favor of Shams and Rumi — possibly circulated by the circles that favor the movie.

The objections of Shirazi and Nouri Hamedani to the movie are based on their interpretation of Islam. Both ayatollahs belong to the so-called “hadith current,” which believes that the Islamic faith is based on the Quran and the hadith — the words of the Prophet Muhammad — and rejects any further interpretation by philosophers and mystics. The scholars of the hadith current consider both philosophy and mysticism — the pillar of Rumi’s Sufism — as an unforgivable sin against faith.

Members of the hadith current have issued fatwas against mystics repeatedly. For example, a summit in Qom in 2007 declared Rumi a heretic.

Mohsen Gharavian, a Qom-based seminary professor, told Al-Monitor that the hadith current believes that the hadiths and the Shiite imams are all is needed for understanding Islam, with no other reasoning needed.

This powerful current forced Ayatollah Ruhollah Khomeini, the Islamic Republic's founder, to end his philosophy class in the Qom seminary three decades before the 1979 Islamic Revolution. The pressure against Khomeini was such that other clerics considered him and his family as “najis,” religiously unclean.

After the Islamic Revolution in 1979, when Khomeini, a philosopher and teacher of mysticism, took over the leadership, pressures on the so-called “rationalists” in seminaries across the country was partly alleviated. However, the hadith current managed to maintain its influence across the country. For example, in 1981, Abdolkarim Soroush, a prominent philosopher, had a show on state TV for interpreting Rumi’s poems, which was later ordered stopped by Ayatollah Khomeini. Khomeini later admitted that the pressures from the clerics that belonged to the hadith current in the religious city of Mashhad had pushed him to take that decision, though he himself liked the program.

Mohsen Gharavian, a philosophy professor, told Al-Monitor, “When Imam Khomeini wanted to send a message to Soviet leaders in 1989, he chose a philosopher to convey his message to [Supreme Soviet Chairman Mikhail] Gorbachev, inviting him to send Marxist theorists to Iran to read our philosophic and mystical books.”

Part of the opposition to the film is based on the fact that it is a co-production with Turkey. A group of experts and journalists stated their opposition to the Rumi and Shams movie owing to the presence of a Turkish producer behind the film, implying that the two countries — both of which claim the heritage of Rumi — have different interpretations on the life and works of the mystic poet.

Milad Azimi, a professor of Farsi literature, wrote in the Mardom-Salari newspaper Sept. 23, “It is not appropriate to make this movie by a Turkish producer. … Turkey is the usurper of our national right on this special issue. By lying and committing forgery, [they] trample scientific facts and declare our honored Iranian figures as Turkish."

He said the screenplay should show that Shams died in Khoy, a city that is now in Iran’s West Azerbaijan province, not in Konya as some Turkish websites claim. “This is a national issue. There has been scientific research and scientists have written solid articles on this [matter]. Shams' tomb is in Khoy, not Konya. If the Turkish [producer] doesn’t accept this, the [Iranian] artists shouldn’t stand this forgery of history,” he said.

“Drunk on Love” is not the only controversy in Iran over films that deal with religious figures. In September, member of parliament Ali Motahari called on authorities to permit the movie “Hussein Who Said No” to be screened in cinema and theaters across the country. The movie, which has been banned for seven years, narrates the story of battle of Karbala in the year 680, where the third imam of the Shiites, Hussein ibn Ali, and 72 male companions were killed by Caliph Yazid ibn Muawiya’s army.

“The main obstacle [in the way] of receiving the screening permit has been the portrayal of the face of ‘Abbas’ that I believe has no religious problem,” Motahari wrote on his Instagram page Sept. 23. Motahari said Abbas ibn Ali — the half-brother of Hussein — is not one of the sacred Shiite imams, which means the portrayal of his face should not be prohibited.