What Iranian clerics really think of Cyrus the Great

The backlash by one prominent Iranian cleric against the recent major gathering at the tomb of Cyrus the Great belies the Shiite clergy’s more nuanced approach to Iran’s pre-Islamic past. 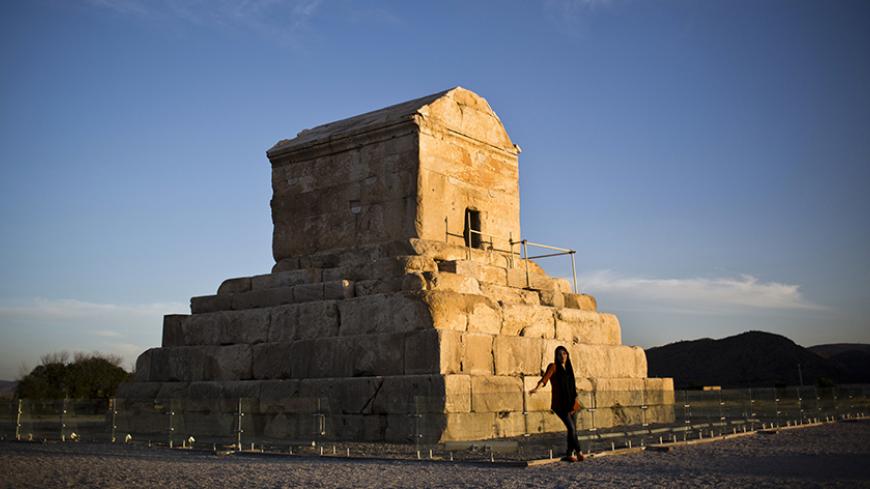 An Iranian woman stands in front of the tomb of Cyrus the Great in the town of Pasargadae, northeast of Shiraz, Iran, May 19, 2015. - BEHROUZ MEHRI/AFP/Getty Images

Cyrus the Great is probably one of the most well-known historical figures to Iranians: an ancient king who has been praised for his wise and fair rule (559-530 B.C.). His achievements — as shown in the ancient Cyrus Cylinder, which Iranians refer to as the first human rights charter — are a great source of pride for the people of Iran.

Yet the flocking of ordinary Iranians in an unprecedented manner to the Tomb of Cyrus in Pasargadae on Oct. 28, to mark what has become known as the international day of Cyrus the Great, prompted a backlash by some Iranian clerics.

On Oct. 30, Ayatollah Hossein Nouri Hamedani criticized the gathering that took place around the tomb of the founder of the Achaemenid Empire, saying, “People rose up and brought about the [1979 Islamic] Revolution and allowed the emergence of a true Islamic system. The Shah used to say, ‘O Cyrus, sleep in peace as we are awake.’ Now, a group of people have gathered around the Tomb of Cyrus and they are circumambulating it and have taken their handkerchiefs out and cry [as they do for Shiite Imam Hussein]. … They are counter-revolutionaries. I am amazed that these people get together around the Tomb of Cyrus, shouting the same slogans for him that we shout in support of the supreme leader, and yet we are sitting here, alive and well, and just watching this.”

Given these widely reported remarks, one may think that this is the sole position of the Shiite clergy in Iran — especially given that Nouri Hamedani’s comments were not immediately and publicly challenged by his peers.

However, the reality is that more often than not, the Qom seminary is home to controversy and debate. At one point, even Ayatollah Ruhollah Khomeini, the founder of the Islamic Republic of Iran, was proclaimed a “heretic” by an ayatollah in the holy city merely for teaching philosophy. These rigid currents in Iran’s seminaries are still alive and well. In fact, special summits are held to this day for the sole purpose of cursing Ayatollah Morteza Motahari, a philosopher and prominent theoretician of the Islamic Republic who was assassinated by leftist Islamists soon after the 1979 Islamic Revolution.

The Qom seminary is divided on the matter of Cyrus the Great, too. Clerics such as Hamedani regard the popularity of Cyrus as equivalent to the rise of “archaism,” namely nationalism that emphasizes Iran’s pre-Islamic past. In the eyes of some Shiite clerics, rising archaism, which was heavily emphasized by the Pahlavi dynasty prior to the Islamic Revolution, equals the weakening of Islam in Iranian society. Thus, their view is that such forms of nationalism should be rejected.

One of the reasons why conservatives and the clergy turned against President Mahmoud Ahmadinejad was the “archaism” espoused and initiated by his closest aide, Esfandiar Rahim Mashaei. Indeed, Mashaei and those around him were labeled as “the deviant current.” Meanwhile, many moderate and Reformist analysts at that time opined that Ahmadinejad and Mashaei’s discourse on Cyrus the Great was merely a political tool to shore up support by stirring up nationalist sentiment.

Amid all this, it should not be overlooked that there is a group of intellectual clerics who, while opposing Pahlavist “archaism,” also express pride in Iran’s ancient past. They believe that rejecting national symbols and beliefs will lead to the damaging of the pillars of national unity in Iran, and thus make the country vulnerable to various threats.

For instance, Motahari, one of the founders of the Islamic Republic, viewed Iran and Islam as bound together, and posited that Islam and nationalism fundamentally play complementary roles for each other. In his book, “The mutual services of Iran and Islam [to each other],” Motahari wrote that as “Islam freed Iran and entered a new spirit in the body of Iran,” Iran in turn “helped the young and glorious Islamic civilization greatly.”

In an interview with Al-Monitor on condition of anonymity, a Shiite scholar and cleric who has been teaching at the Qom seminary for the past two decades said, “Islam doesn’t seek to take away national pride from people. What is currently happening is a political issue.” He added, “The seminary and religion do not dismiss Cyrus and the ancient history of Iran at all. Some who are expressing their opposition to Cyrus aren’t speaking on behalf of the whole seminary. I should say that even those who have voiced their opposition regarding this issue do not hold an opinion against Cyrus. For instance, Ayatollah Nouri Hamedani criticized the tears the crowd there [in Pasargadae on Oct. 28] shed, not Cyrus himself.”

The Qom-based scholar concluded his interview with Al-Monitor by saying, “I believe enemies of Iran are seeking to destroy Iranian society by creating such issues and polarizing the country. Prolonging these issues and tensions aren’t in the interest of the country and our national security. In fact, our religion and nationalism are tied together.”

In this vein, while slamming the “archaism” of Ahmadinejad and Mashaei, Grand Ayatollah Abdullah Javadi Amoli, a senior cleric in Qom, said on Oct. 8, 2012, “Iran has had a monotheist identity since ancient history. … Iran is our homeland, and we love this homeland. Loving the homeland is rooted in belief [in God], and it behooves us to defend this land, and if anyone is killed in the way of defending this country, [he] is a martyr. And it is our religion which is telling [us] this, but an Iran without Islam will face many dangers.”

Of further note, Cyrus is specifically subject to debate among Islamic scholars, as some believe he is extolled in Islam’s holy book. In verses 83 and 98 of the chapter Kahf, the Quran narrates a story revolving around an individual named Dhul-Qarnayn, who is praised as a believer and ruler: “Indeed, we established him upon the earth, and we gave him to everything a way.” Allameh Muhammad Hossein Tabatabai, one of the most prominent thinkers of philosophy and contemporary Shiite Islam, cautiously identifies Cyrus as Dhul-Qarnayn in his 20-volume work of Quranic exigesis, the "Tafsir al-Mizan." Other scholars engaged in Quranic exigesis, such as Grand Ayatollah Nasser Makarem Shirazi — one of the most senior clerics in Qom — have also described Cyrus as Dhul-Qarnayn.

As such, while there is a strong undercurrent in the Iranian Shiite clergy that rejects nationalism along the lines of the “archaism” of the Pahlavi era — and its contemporary successors — this opposition to “archaism” should not be conflated with a rejection of Iran’s pre-Islamic past, let alone Cyrus the Great. If anything, the philosophical and scholarly debates in the Iranian seminaries in recent decades show an appreciation of Iran’s ancient past while emphasizing the country’s Islamic identity. Thus, in this Islamic-Iranian reading of Iranian identity, Cyrus is in effect a source of pride and strength rather than a potential threat.