The unexpectedly large gathering of devotees of Cyrus the Great in his resting place of Pasargadae on Oct. 28 sparks heated debate in Iran. 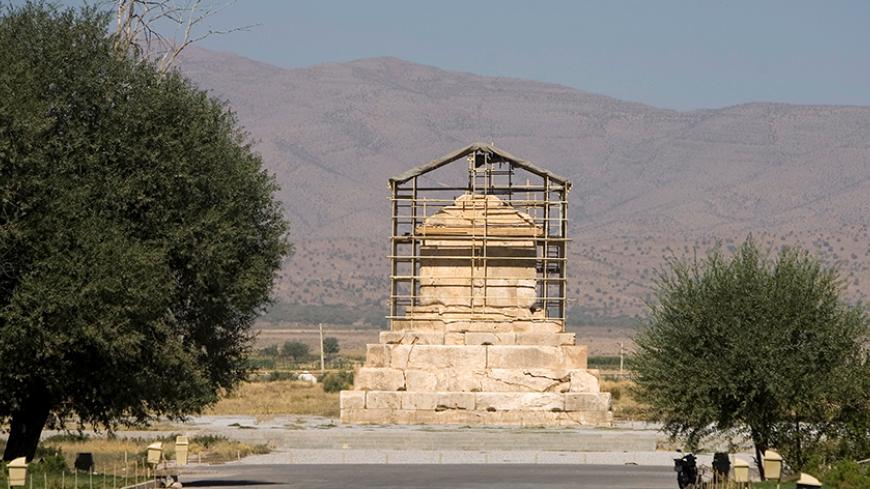 The tomb of Cyrus the Great, a revered king of the Persian Empire, is seen at Pasargadae, south of Tehran, Iran, Sept. 24, 2007. - REUTERS/Caren Firouz/File Photo

TEHRAN, Iran — Iranians have long been proud of their ancient history and culture, and they always speak of the Achaemenid Empire (circa 550-330 B.C.) with pride. Since the kings of this empire, and particularly Cyrus the Great and Darius the Great, ruled with benevolence and tolerance, they enjoy a particular affection among Iranians. Darius, in his famous prayer, wished for the empire to be protected from enemy armies, drought and lies. Though some historians doubt the authenticity of the prayer, its narrative has nonetheless been accepted by most Iranians.

Former President Mahmoud Ahmadinejad correctly picked up on this sentiment among Iranians and gradually moved away from his radically conservative views toward more nationalistic tendencies. In an unprecedented statement, originating from his close friend and adviser Esfandiar Rahim Mashaei, he even called Cyrus’ actions a continuation of the conduct of divine prophets. The statement was strongly criticized by fellow conservatives and those who had previously supported him. Ahmadinejad’s September 2010 unveiling of the exhibition of the famed Cyrus Cylinder, which was on a four-month loan to the National Museum of Iran — the first time since the 1979 Islamic Revolution — was met with criticism, too. Mashaei was notably also present at the opening ceremony. However, both Ahmadinejad and Mashaei faced a public that did not trust the sincerity of their supposed respect for Cyrus and Iran’s ancient legacy. Indeed, many Iranians interpreted these measures as political maneuvering, leaving Ahmadinejad and Mashaei with little success in their endeavor.

Nonetheless, in a new development, ordinary Iranians have in recent years flocked in an unprecedented manner to the Tomb of Cyrus in Pasargadae on Oct. 29, which has become known as the International Day of Cyrus the Great. Based on some historical records, it is the date when the Achaemenid king entered Babylon. Pasargadae is located to the north of Persepolis in the southern province of Fars. Apart from the Tomb of Cyrus, its main attractions include the Audience Hall, the Gate Palace and the Toll-i Takht fortification.

Due to the overlap of leap years in the Iranian and Gregorian calendars, this year’s gathering was moved back one day, to Oct. 28. The number of people who showed up at Pasargadae was surprising. The event fell on a Friday, which is a weekend in Iran, and reportedly saw a traffic jam in a 30- to 40-kilometer (19- to 25-mile) radius on the roads leading to the tomb. Those who had witnessed similar get-togethers say they had never seen such a large gathering. The locals, including those dwelling in the nearby Pasargadae village, were also quite amazed by the sheer number of visitors. Reports say people started gathering in the area, especially around the Tomb of Cyrus, from as early as the evening before and that there was heavy traffic on roads to the site. As such, the main entrance to Pasargadae was closed the night before, with no more cars allowed to enter. On Oct. 28, social media users shared widely circulated videos and pictures of the gathering of Cyrus devotees, showing some of them shouting slogans praising the Achaemenid king.

President Hassan Rouhani even published a picture of himself next to the nearby Achaemenid capital of Persepolis on his Instagram page, with the caption: “Persepolis is one of the invaluable and unique remains of the ancient history of this land, which demonstrates the antiquity of the civilization, the ingenuity, the wisdom, and the management skills of the great people of Iran, as well as their monotheism.”

However, after the circulation of the videos and pictures of the gathering, criticism also followed. Ayatollah Hossein Nouri-Hamedani, one of the most senior clerics in the holy city of Qom, harshly criticized the gathering. Arguing that Iran had long been oppressed by kings and their imperial administrations, he said Oct. 30, “People rose and brought about the revolution and allowed the emergence of a true Islamic system. The shah used to say, ‘O Cyrus, sleep in peace as we are awake.’ Now, a group of people have gathered around the Tomb of Cyrus and they are circumambulating it and have taken their handkerchiefs out and cry [as they do for Shiite Imam Hussein]. In the time of Imam [Ruhollah] Khomeini, too, a group of people started commemorating Cyrus. The imam [Khomeini] said that these people have gathered and are crying because we have brought Islam to this country.” He added, “These are the same [people]; they are counter-revolutionaries. I am amazed that these people get together around the Tomb of Cyrus, shouting the same slogans for him that we shout in support of the supreme leader, and yet we are sitting here, alive and well, and just watching this.” Ayatollah Nouri-Hamedani then concluded, “Who in power has been so negligent to allow these people to gather? We are in a revolutionary and Islamic country, and this revolution is the continuation of the actions of the prophet and the imams, and their point was to create a perfect populace.”

On Oct. 31, the day after Nouri-Hamedani's statement, Ali Salehi, the prosecutor in Fars province, announced the arrest of the organizers behind the gathering in Pasargadae. He said, “These people have already been under surveillance by the intelligence agencies and the police. After sufficient investigation, the leaders and main actors of these events who had started shouting the abnormal and offensive slogans were arrested.” Salehi also said that those arrested will be formally charged and that the necessary judicial actions will be taken against them. There have not yet been any news about the nature of these charges, nor what these “abnormal and offensive” slogans may have been.