Two hundred dervishes were arrested and then released for protesting against the continued imprisonment of dervishes who are on hunger strike in Iran. 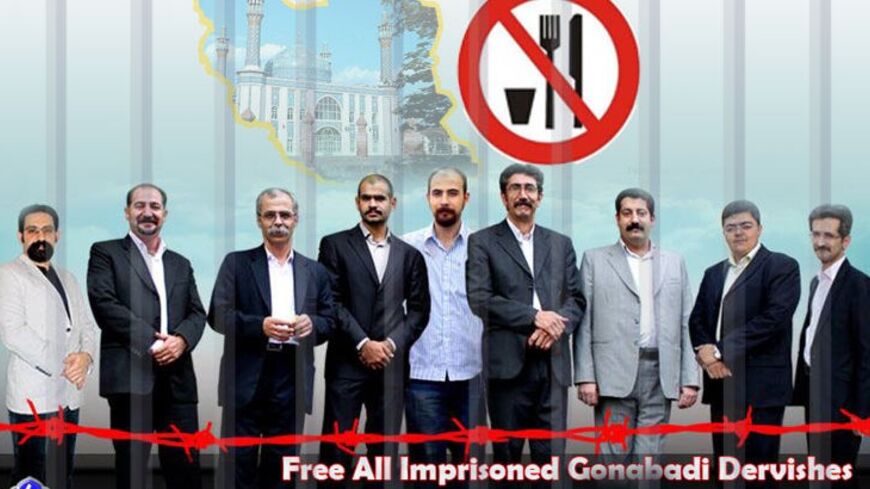 Over 2,000 dervishes gathered in front of Tehran's main judicial court on Mar. 8, 2014, in solidarity with nine imprisoned dervishes who are on a hunger strike. - Majzooban Noor

TEHRAN, Iran — Despite a more moderate government taking power in Iran, street protests organized by the opposition are still a dangerous line to tread. Still, in spite of this, the Gonoabadi dervishes — followers of a branch of Sufi Shiism — organized the largest public gathering of the year in Tehran.

Majzooban Noor, the news website of the Iranian dervishes, reported that over 2,000 dervishes had gathered in front of Tehran's main judicial court on Mar. 8, 2014. The protesters included the families of imprisoned dervishes and a few well-known human rights activists. This rather significant protest is related to the hunger strike of nine imprisoned dervishes.

The first day of the protests proceeded peacefully. Tehran's police commissioner, Commander Sajedi, promised that protester demands would be considered. The protesters then gave an ultimatum: Unless their demands were satisfied by the next morning, they would renew their protests. The following day, the protests did not go as peacefully. Based on eyewitness reports to Al-Monitor, police and security forces fired warning shots to disperse the protesters, and the Special Police Force also harried them, arresting around 200.

Sedigheh Khalili, the wife of imprisoned dervish Hamidreza Moradi, was present at the protest and told the International Campaign for Human Rights in Iran that substantial violence was used against women, claiming that she was kicked to the point where she could barely walk.

More surprising than the protest taking place was the release of all those arrested the next day.

The Gonabadi dervishes consider themselves to be part of the Nematollahi Gonabadi Sufi order. They believe in all tenets of Islam and Shiism, including monotheism, the right prophecy of the Prophet Muhammad, judgment day, the coming of the 12th Imam and the innocence of the Prophet, his daughter and the 12 Shiite Imams.

Dervishes, however, believe in a particular type of religious lifestyle. Unlike other branches of Sufism, their leader Nematollah forbade them from ascetism and withdrawal from the world. These dervishes do not wear a special costume. Nematollah has said, “[My followers] love all humans regardless of their religion and nationality, and honor them all, and their lives are based on kindness and service to the people.”

Considering this, one wonders why the government and the conservative clergy do not allow the dervishes freedom to practice in Iran. A religious scholar, talking to Al-Monitor under the condition of anonymity, said: “In the Hawza Elmiya [the Shiite religious seminary system], there had been two approaches to dervishes and Sufism. A few who carried much weight in the Hawza supported mysticism and Sufism. Others strongly opposed it. Similarly, a group opposed philosophical inquiry, and the other opposed it fiercely. For example, Ayatollah [Ruhollah] Khomeini was a supporter of philosophical inquiry.”

Starting in the late 1980s and with the death of Ayatollah Khomeini, the dervishes started facing serious problems. With the election of Mahmoud Ahmadinejad to the presidency, the repression began to increase.

In February 2006, a great clash over the closing of the hosseiniye of the Gonabadi dervishes took place in Qom. Reports tell us that the hosseiniye and two adjoining houses, belonging to two of the dervishes who were related to the groundskeeper, were burnt down overnight. The extent of the damage was such that the eyewitnesses on the morning of Feb. 14 could not find any traces of the hosseiniye building.

The governor of Qom announced that, as part of the clashes, a thousand people were arrested and 200 people, including the deputy commissioner of the Qom provincial police, were injured. The clashes happened after city officials tried to take control of the hosseiniye from the dervishes and stop its activities.

A political analyst who lives in Qom and witnessed the protests told Al-Monitor: “The intelligence operatives and the police did not get involved in direct confrontation. A group of seminary teachers and students had gathered in front of the hosseiniye. The dervishes had barricaded themselves in the hosseiniye and its surroundings and did not let them get close. The funny thing was that the police and the intelligence people, who normally do not allow even two people to gather in protest, left this large group alone. The seminary students climbed the bulldozers and started shouting that ‘Islam is in Danger!’ They then proceeded to throw rocks and broken pipes toward [the dervishes] and were destroying the hosseiniye. The dervishes put up a little fight, but then they realized that it is hopeless and they escaped outside the hosseiniye. Whoever exited the building was arrested by the police and the intelligence officers.”

After this, oppression of the dervishes heightened. The tomb of dervish Naser-Ali at the Takht-e Pulad mausoleum in Esfahan was demolished with a bulldozer and its artifacts were looted. Eight months after the destruction of the hosseiniye in Qom, the residence of Nur-Ali Tabandeh, leader of the Nematollahi Gonabadi dervishes, located in Gonabad in northeastern Iran, was put under siege by intelligence officers. Other attacks were carried out on a hosseiniye in Borujerd, and the residence of a teacher named Rahmatollah Javadi, where meetings took place, was also destroyed. During the time of Ahmadinejad, a number of dervishes were arrested, imprisoned or banned from the educational system.

Nonetheless, the persecution of the dervishes has not been ignored by the opposition. Ayatollah Hossein Ali Montazeri — the late Shiite marja in Qom — and Mehdi Karroubi, chairman of the Etemad Melli party and a leader of the Green Movement, reacted against this oppression. Ayatollah Montazeri, in a declaration condemning the actions against the dervishes, “strongly” urged the officials in Qom to reconsider “the injustices carried out these days.” Karroubi, who was also former speaker of the Majles, or Iranian parliament, wrote a letter to the marjas in Qom. He criticized the destruction of the hosseiniye of the Nematollahi dervishes in Qom and asked them to condemn such actions. He said that defending the rights of all humans, “even those whose ideas we do not appreciate,” is among the main duties of the religious authorities in Iran.

This past spring, with the defeat of all of the conservative candidates by Hassan Rouhani, the candidate endorsed by the Reformists and the Green Movement, hopes were raised for a better situation for the dervishes. Rouhani appointed Ali Younesi, Mohammad Khatami’s minister of intelligence, as the special adviser of the president in matters of religious minorities. Younesi has said the government is trying to prevent extremism and the arbitrary actions of certain intelligence units against minorities.

Supporting the religious activities of the dervishes and criticizing efforts to persecute them, he said: “Some Muslim sects like the dervishes are facing certain sensitivities. Dictating that the dervishes should shave their mustaches is wrong and arbitrary. If the followers of a sect gather once a year at the tomb of a respectable leader, we have no right to limit them and to allow people to come and bother them. The police should even protect their security.”

A homemaker in Tehran, who herself is a dervish, told Al-Monitor: “I voted for Rouhani so the pressure is removed a bit. We were really persecuted under the Ahmadinejad [government]. I hope Rouhani sees to us. I think the fact that the recent protesters were released so quickly has surely something to do with the position of the executive branch. Otherwise, they would not have been set free and would have had court cases opened against them.”

She continued, “Nonetheless, they have to set the leaders of the dervishes free as well. We are told that their situation in jail is so dire that they have had to go on strike. Hunger strike is quite dangerous; God forbid that something might happen to them.”