'Cyrus Cylinder' a Reminder Of Persian Legacy of Tolerance 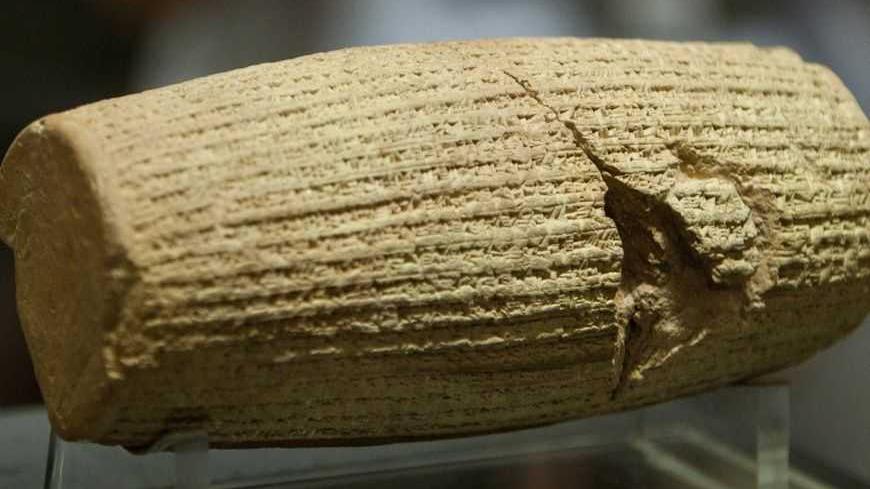 The Cyrus Cylinder on display at the National Museum of Iran in Tehran, Sept. 12, 2010. - REUTERS/Caren Firouz

For an artifact with such an awesome legacy, the Cyrus Cylinder is remarkably unprepossessing.

It looks like a small loaf of rye bread from which someone has broken off a chunk.

Yet this nine-inch long piece of baked clay inscribed with cuneiform script — which begins a five-city tour of the United States in Washington this week -- has inspired religious and political thinkers from ancient times through the drafters of the US Constitution and the founders of modern-day Israel. It also serves as a source of hope and pride to Iranians inside and outside Iran who are saddened by the current state of civil liberties in their homeland.

On loan from the British Museum, the cylinder is more than 26 centuries old and was discovered near Babylon in what is now Iraq in 1879. It recounts the capture of Babylon by the Persian King Cyrus and his proclamation of freedom for religious minorities, including those who had been brought as slaves to Babylon.

At a gala dinner Tuesday [March 5] honoring the cylinder’s arrival at Washington’s Arthur M. Sackler Gallery, Neil MacGregor, director of the British Museum, said the cylinder is “more important now than ever” for the light it sheds on Iranian history and the guidance it provides for dealing with “the great diversity in our societies.” The charter inscribed on the cylinder is, he said, “the first attempt we know about running a society, a state with different nationalities and faiths — a new kind of statecraft.”

The cylinder has also played an important role in cultural diplomacy. Twice, it has been on loan to Iran. The first time was in 1971 when the shah staged an opulent — and as it turned out, shortsighted — celebration of 2500 years of Persian monarchy. The second time was in 2010, when a million Iranians came to view the cylinder in Tehran.

At Tuesday’s gala, MacGregor focused on Iran’s past, rather than the present. However, he suggested gently that the modern understanding of human rights differs from Cyrus’ day. The cylinder, MacGregor said, “is clearly about the rights of peoples and communities, not individuals.”

In an email, Ahmed Shaheed, the UN special rapporteur on the situation of human rights in the Islamic Republic of Iran, who released his latest report this week, told Al-Monitor, “the Cyrus Cylinder is one of many artifacts which highlight the truly rich and storied historical heritage of Iran. On it, already in the sixth century B.C., the Persian King Cyrus rebukes his Babylonian predecessor for denying to his subjects what we today would call freedom of religion and the right to housing. It is a remarkable example of an ancient pledge to uphold certain precursors to modern human rights. It should represent both a source of hope and pride for the Iranian people of today, and a serve as a reminder to the Government that Iranians will continue to demand, and must be granted, their most basic human rights by their political leaders.”

MacGregor said the cylinder also underlines the historical anomaly that Iran today has such poor relations with Israel and the United States.

Thomas Jefferson, the museum director noted, read the biography of Cyrus before drafting the Constitution while King George V referred to Cyrus in approving the Balfour Declaration of 1917 in which the British government said it viewed with “favor the establishment in Palestine of a national home for the Jewish people.” Former US President Harry Truman is said to have exclaimed “I am Cyrus” when he went against the Washington establishment consensus and recognized the state of Israel. Jews were among those freed by Cyrus, who encouraged them to return and rebuild their temple at Jerusalem.

In a room adjacent to the cylinder at the Sackler gallery — where the exhibition will remain through April 28 before traveling to Houston, New York, San Francisco and Los Angeles — the walls are covered with quotations about Cyrus from Aeschylus to Isaiah to Israeli Prime Minister David Ben-Gurion. Shirin Ebadi, a modern Iranian human rights defender, wrote that “the charter of Cyrus the Great is one of the most important documents that should be studied in the history of human rights.”

MacGregor said it was the government of Iranian President Mahmoud Ahmadinejad that requested the loan of the cylinder in 2010 in return for artifacts Iran had lent to the British Museum.

“I was surprised this was the one thing they wanted back,” MacGregor said. He noted that Ahmadinejad’s vice president, Esfandiar Rahim Mashaei, “talked about Cyrus as the forerunner of the Prophet [Muhammad]."

MacGregor said he also talked to Iranian officials about “our desire to bring it [the cylinder] to the United States and it was met with great enthusiasm by the Iranian government. Ahmadinejad wanted the world to be reminded of this part of Iran’s history.”

Money for the US tour has been provided largely by members of the Iranian diaspora — in particular, the Iran Heritage Foundation. At Tuesday’s dinner, there were many prominent Iranians who fled their country after the 1979 revolution.

Asked about the exhibition, Alireza Miryousefi, the spokesman for the Iranian Mission to the United Nations, told Al-Monitor in an email:

“We welcome the tour of Cyrus Cylinder in the United States. This could help to introduce Iran's rich and brilliant culture and history. This cylinder is evidence that Iranians historically have had a deep respect for human rights and the peaceful relations with other nations. We hope this cultural event provide a better and closer understanding between two nations.”