The decision by the Konya Provincial Culture Directorate to remove a 1,000-year-old pool from the Mevlana Museum's garden is an assault on Rumi’s heritage. 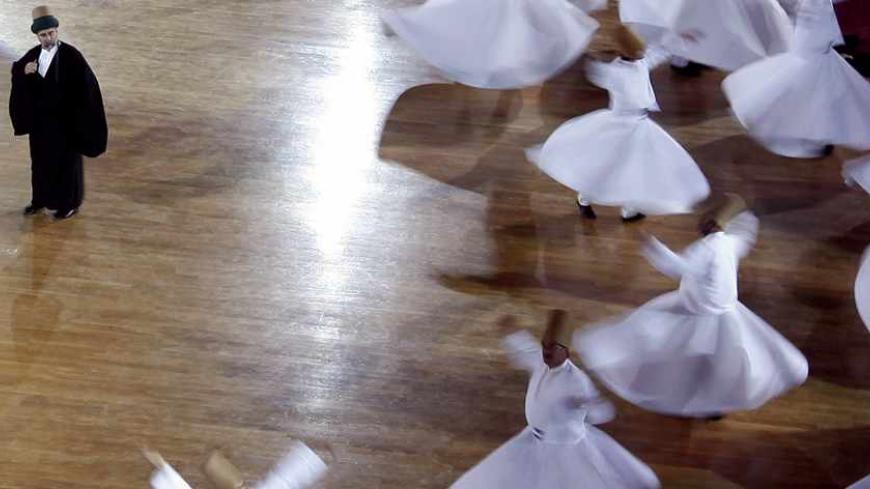 Last week, Istanbul hosted the “Seb-i Arus” celebration, in honor of the 13th century poet, mystic and master of the Mevlevi Sufi order, Mawlana Jalaleddin Rumi. Politicians of the highest ranks including Turkish Prime Minister Recep Tayyip Erdogan and foreign diplomats joined the annual celebration. Spiritual music accompanied recitals of Mevlevi philosophy, while dervishes performed the “Sema,” or whirling ritual. On Dec. 17, a magnificent closing night of “Seb-i Arus” is expected to take place in Konya, one which will see Iranian President Hassan Rouhani in attendance.

Since Rumi believed that death is birth into a new life and reunion with God, the anniversary of his death became the annual occasion for a birthday celebration. Hence, the name of the celebration "Seb-i Arus," which means wedding night, or when lovers unite.

Rumi, the man on whom all these rituals are based, was born in Balkh (now part of Afghanistan), but spent most of his life in Konya, in the central Anatolia region of Turkey, where he died in 1273. Among what many agree is the greatest work of both Islamic mysticism and Persian literature is his six-volume spiritual poem Masnavi Ma’navi (Spiritual Couplets), each volume of which is made up of about 25,000 verses or 50,000 lines. Last year, Konya’s mayor proudly stated that Masnavi Ma'navi has been translated into 22 languages.

While the perceptions of Rumi’s teachings vary across the world, they inspire people for benevolence, love and tolerance. According to Ibrahim Gamard, a California-based sheikh of the Sufi Mevlevi order, "There continues to be a strong interest in Sufism [in the United States and the West], but this is because it is presented as a type of mysticism that is not dependent upon Islam and which transcends particular religions.” Therefore, compared to other commercialized books, Garnard's book Rumi and Islam (2004) did not sell very well, though he still claimed, “By reading even the most popularized Rumi books, Americans are learning about many traditional Muslim values and teachings of wisdom.”

Even in Israel — which some might say is unimaginable — Rumi is the most popular poet and an inspiration to many artists such as the musical ensemble Diwan Saz. A wonderful documentary titled Israeli Dervish by Al Jazeera tells the story of Miki Cohen, who translated Rumi’s works into Hebrew and practices whirling in worship. He's one of the few outsiders and the only Israeli Jew who was granted access to the inner sanctum of the whirling dervishes in Konya. The film also shows the Kadiri order in Nazareth, Israel, where people of all faiths pray together and break both bread and prejudices of Islam as a religion of hate rather than love, the way Rumi described in his poems.

Yet, when Rumi is presented through universal spiritual love that crosses religions, a perceived dissolution of relationship between Rumi and Islam disturbs some conservative Muslims. For example, the 2013 Konya International Mystic Music Festival’s official logo caused a stir, since critics protested the misrepresentation of Rumi looking like Buddha, both in posture and meaning, possibly leading to wrongful idolization. Moreover, head of the Dervish Lodge Mehmet Cipan criticized tendencies of transforming Mevlevi philosophy under the name of Sufism away from the Quran, hadith and love for God, into love for Rumi himself, thus committing the unforgivable sin of “shirk,” or associating others with Allah.

However, there seem to be more imminent threats to the tradition of Rumi — threats that the conservatives who claim to sacredly cherish his heritage should be alarmed about. Marking this year’s 740th anniversary was preceded by a shocking event that not many Turkish media sources reported on. The Konya Provincial Culture Directorate removed the 1,000-year-old pool from the Mevlana Museum's garden. The works, which started three months ago as part of a rearrangement of the museum included the rebuilding of the pool in a place 3.5 meters (11.5 feet) away, while the original marble stones were reported to have been destroyed.

This action — both crude and cruel — might seem unimportant to the uninitiated. Yet, it seems excessive aggression to a priceless artifact. According to Erdogan Erol, who worked as the museum director for 25 years before retiring, there are two types of documents in literature about the pool. “As our grandfathers told us, this place was a rose garden in the Seljuk Palace and was given to Rumi's father by the sultan of that period, Alaeddin Keykubat,” Erol explained. “The pool inside the rose garden is the oldest structure of the garden. Hence, the pool has a history of 1,000 years,” he added.

The value of what to some people seem to be easily transferable old stones is priceless as a testament of the past. The authorities’ seeming insensitiveness contradicts the almost missionary-like zeal that fuels the members of the government in their efforts to celebrate the glory of the Ottoman past, Rumi’s legacy included.

Disturbed with the done-deal attitude of the authorities regarding what he calls a "murder,” Erol called for an investigation and reversal of the authorities’ actions. Moreover, the opposition deputy from Konya, Atilla Kart, criticized what he called the ruling party’s normalization of arbitrariness, irresponsibility and unaudited unrestraint. He recalled that Mevlana Museum Director Yusuf Benli was removed in 2011 from being in charge of the Topkapi Museum, for ordering Sultan Selim III’s throne relocation to his own lodging.

On the other hand, Benli said that the works are still “in progress” and that the pool would be "restored" after "Seb-i Arus" has finished on Dec. 17. Mustafa Cipan, director of the Konya Culture and Tourism Directorate, also stated that the pool was not only repaired before but cited leakages due to deformations of the pool’s construction. Hurriyet reported on Cipan having said that the stones are being taken care of and no vandalism is taking place due to the meticulous and appropriate job done. When Al-Monitor tried to reach the museum’s authorities on Dec. 16, they were unavailable or busy — and so the controversy goes on.

Numbers show at least huge commercial incentives for those who choose to ignore the importance of the authenticity of historic remnants. Besides spiritual value, there has also been global commercialization of Rumi as an increasingly lucrative brand. The Mevlana Museum attracted 900,000 visitors during the first half of 2013 and ranks second on the list after the Topkapi Palace in Istanbul. Tickets sell fast, and hotels in Konya operate at full capacity during the week of the Rumi celebrations.

Economic gains on the side, Konya authorities’ “relocation” of Rumi’s pool confirms a pressing need for more transparency, accountability, improved communication and education on Turkish cultural heritage. A sacred memory also obliges that the material manifestations of history are respected and not forsaken.

On a more universal level, the quest for Rumi’s soul continues, reflecting conflicting attitudes. I believe Elif Safak was right when she observed in The New York Times, “… people like Rumi remind us that stereotypes and dogma are products of our minds. Behind all appearances, we are, and have always been, one.” In other words, while those conservative Muslims who emphasize that only the very dedicated can become true Mevlevis in terms of norms and rules are not wrong, they might be missing another point: Rumi’s heritage is unmistakably Islamic but is best protected when serving as a spiritual bridge that unites and opens hearts, while connecting Islam with the rest of humanity.