How Egypt responded to Erdogan’s rant at UN

In his speech at the UN General Assembly where he attacked Egypt and its president, Turkish President Recep Tayyib Erdogan has made it clear that his anger at Cairo will not fade any time soon. 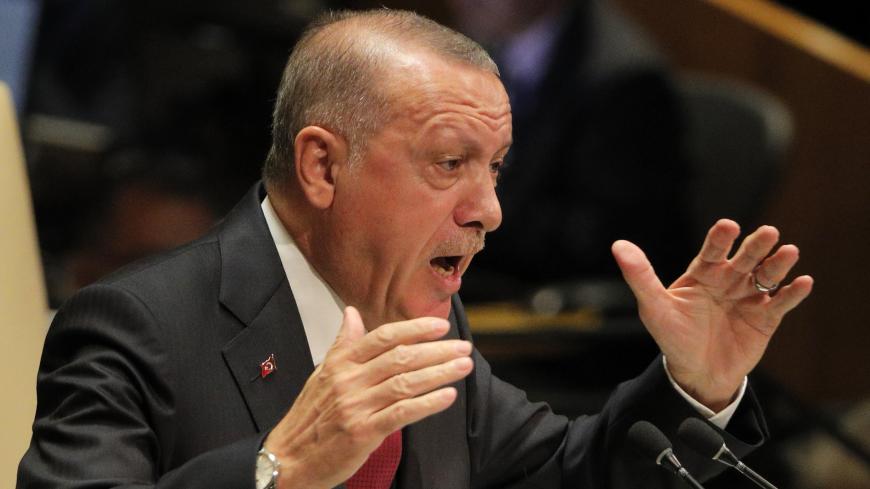 CAIRO — The 74th session of the United Nations General Assembly that opened Sept. 19 stirred Turkish-Egyptian disputes once again and hit the headlines, after Turkish President Recep Tayyip Erdogan attacked Egyptian President Abdul Fattah al-Sisi in his speech. Egypt fired back, which observers considered a renewal of an overt political dispute and a covert conflict over gas.

In his Sept. 24 speech, Erdogan attacked the Egyptian government and Sisi, accusing him of intransigence toward the family of ousted President Mohammed Morsi and called for punishing him. Erdogan pointed the finger at Sisi for killing innocent people and staging a coup against legitimacy, in reference to Morsi’s ouster.

In response, the Turkish Foreign Ministry criticized Egypt’s statement, saying it was filled with false allegations. It also mocked the accusations of the Turkish government.

Tarek Fahmy, professor of political science at Cairo University, told Al-Monitor, “Egypt has undoubtedly achieved huge successes at the Eastern Mediterranean Gas Forum, which raised the ire of Erdogan. The forum was the final nail in the coffin of Erdogan’s dreams to turn Turkey into a regional hub for energy in the Middle East — which contains huge gas reserves — and to export gas to Europe to make huge economic gains. But Cairo replaced Turkey in that. He now does not miss any opportunity to attack Egypt. His recent aggressive speech before the UN is only a sequel of his criticism of Egypt since the June 30 Revolution, which toppled the [Muslim] Brotherhood and Morsi following massive protests against his rule that called for the army’s intervention.”

He said that Egypt foiled all Turkish schemes and took charge in the Eastern Mediterranean after signing energy agreements with Cyprus and Israel. According to Fahmy, the Turkish leadership was frustrated and paraded its power with its statements to cover up its failure in this field and its political dispute with Egypt due to its support for the Muslim Brotherhood.

Fahmy indicated that the political dispute between Egypt and Turkey will continue as long as Erdogan is in power and continues to support the Brotherhood. However, the Egyptian and Turkish people are friends, and there are no disputes between them.

On Sept. 19, 2018, Egypt signed an agreement with Cyprus to build a direct naval pipeline to transport natural gas from the Cypriot Aphrodite field to liquefaction stations in Egypt and to export it to different markets.

Egyptian Minister of Oil Tarek el-Molla said at the signing ceremony in Nicosia that the Egyptian-Cypriot agreement does not only aim at building a naval pipeline, but it also contributes positively to supplying gas to the European Union. This was a source of concern and anger for the Turkish leadership, which bickered with Cyprus. Turkey aspired to become a gateway for moving gas to Europe to make economic gains.

Carole Nakhle, energy expert at Carnegie Middle East Center, believes that Turkey cannot compete with Egypt as a gas supplier, given Egypt’s reserves and production. She told Al-Monitor, “Egypt plans on becoming a regional hub facilitating the export of gas from neighboring countries — including Cyprus — to foil Turkish plans. Turkey wants to remain a key pathway for gas to Europe. Besides, Turkey has many ideological differences with Cyprus/Northern Cyprus.”

Nakhle added, “Still, regardless of the angry statements, Turkey has limited options under the current circumstances, while Egypt will continue putting pressure to implement the long-term gas plans in the Eastern Mediterranean area.”

Former Assistant Minister of Foreign Affairs Gamal Bayoumi told Al-Monitor, “The Turkish president lost his mind when he failed on all levels and caused major problems for Turkey. So, he made aggressive statements for local consumption to cover up his failure.”

Bayoumi said, “The echoing Egyptian gas victory and the agreements with Cyprus and Israel made Cairo a regional energy hub in the Middle East and a source of exportation to Europe. These successes were conflicting with Erdogan’s ambitions.”

Bayoumi noted that the Egyptian response was comprehensive and sufficient to answer Erdogan’s polemics. Erdogan who feels disappointed for failing is facing anger from his people and Turkish politicians.

Director of Al-Ahram Center for Political and Strategic Studies Gamal Abdel Gawad said that Egypt imposed itself and spearheaded the Middle East in the field of gas through agreements with Greece, Israel and Cyprus. He told Al-Monitor, “The huge dispute over gas in the Middle East was one of the main reasons behind Erdogan’s constant attack on Egypt, and Erdogan’s aggressive speech against Egypt before the UN made that clear. At the same time, obvious political reasons have been at play since the June 30 Revolution, which toppled the rule of the Muslim Brotherhood supported fervently by Erdogan. Ever since, political disputes between Erdogan and Egypt have not stopped unfolding.”

Gawad lauded the Egyptian response and described it as rational as it refuted Erdogan’s allegations and answered realistically, revealing all his tyrannical practices to his people who are already angry at his politics.

Gawad explained, “Economic ties with Turkey are ongoing, and we will not let political disputes that go back six years affect them. Egypt will not stop moving forward in its gas policies in the Mediterranean, given its huge capacities and its excellent geographical locations.”