Egypt tries to get new Sudan government to its side

Egypt has recently hosted a meeting of Sudan’s revolutionary forces and armed opposition to help advance negotiations and peace talks, as Cairo believes security in Sudan is linked to its own internal stability. 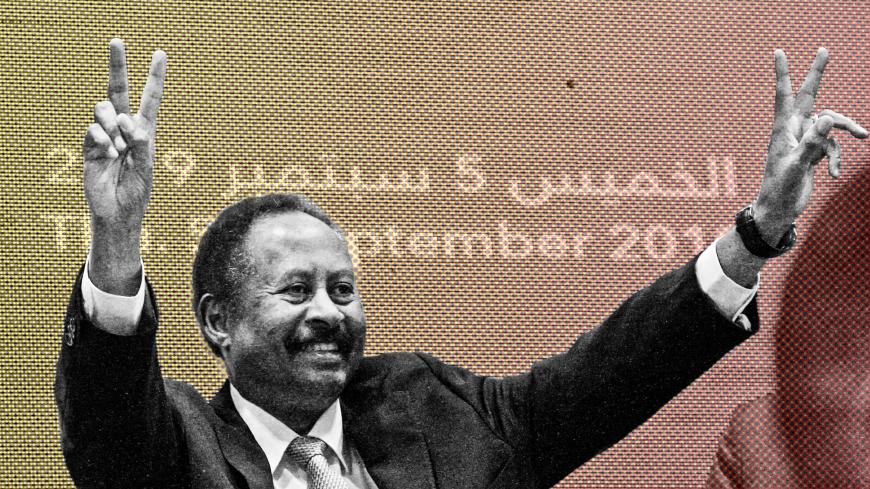 CAIRO — Cairo kicked off its first official move to support Sudan in its security and political issues. On Sept. 22-30, a tourist resort in Ain Sokhna hosted figures from the political forces and armed movements represented by the Sudan Revolutionary Front and Nidaa al-Sudan to sponsor a national dialogue and come up with agreements for peace in order to establish security in all Sudanese territory.

Cairo was among the first countries to closely follow up on the developments in Sudan since the ouster of President Omar al-Bashir in April, and it has been in constant contact with the Transitional Military Council. It has sponsored the dialogue between Sudan’s Forces of Freedom and Change and the Sudanese Revolutionary Front, from which the document of the Constitutional Declaration emerged. At the government level, Foreign Minister Sameh Shoukry was among the first officials to visit Sudan Sept. 9, to coordinate with the new government, only hours after Prime Minister Abdalla Hamdok was sworn in.

An Egyptian security source familiar with the Sudanese dossier told Al-Monitor, “After the relative stability inside Sudan since Bashir’s ouster on April 11 and the signing of the Constitutional Declaration, the security issue became the main dilemma in the equation of political stability. This reflects negatively on the Egyptian national security should security tension persist and armed movements continue to control various parts of the Sudanese territory.”

The source added, “Egypt — through its sponsorship of dialogue and negotiations — shares its experience and vision regarding security arrangements, the integration of armies and armed movements into the Sudanese [National Army] and the formation of a unified, professional, national army to serve the state.”

Prior to Bashir’s ouster, Sudan had five irregular armies, each with its own social and political interests. In addition to the Sudanese National Army, there were the Rapid Support Forces, the Revolutionary Front Forces, and other armed forces that included military formations of the Islamists, Salafist warfare and tribal militias.

Sabah Moussa, a journalist focusing on Sudanese affairs who works at Sudan’s Al Youm Al Tali newspaper, told Al-Monitor, “Egypt has started cooperating with the new Sudan in order to establish peace and security to ensure the cessation of any civil wars and put an end to all tensions and security concerns in Sudan.”

She said, “It is not easy to sponsor negotiations between armed movements, each with their own interests, but they need strong diplomatic and security expertise and skills, especially given that one option is to demobilize some armed forces or integrate them into the Sudanese National Army.”

Moussa noted, “Here, complex arrangements are needed given the difference in ideology between the Sudanese National Army and those of the armed movements, which rely on guerrilla warfare and tit-for-tat techniques.”

She added, “The results of the recent meetings were a sign of the willingness to start negotiating a unified vision of peace, over which all civil and armed movements can agree.”

The Ain Sokhna meetings, which were attended for the first time by most figures and forces that oppose Bashir’s regime, ended in agreement on the main points on the agenda of future negotiations to achieve peace, including reform in the security sector and rebuilding the national army to include organized and armed forces to be at the service of the Sudanese people.

Moussa stressed the importance of Egyptian coordination with the various Sudanese parties to ensure harmony in visions and positions, not only in terms of bilateral cooperation such as the economy, security and trade, but in the regional cooperation dossier, especially in regard to security issues in the Nile Basin and Red Sea are.

She noted the differences in the intentions of some new leading figures in Sudan toward the surrounding countries, whether in the Arab or African region.

Moussa added, “So far, Hamdok’s political orientation has not been determined, although Cairo is among the first capitals he visited Sept. 18, after assuming responsibility and before attending the UN General Assembly meetings in New York. Meanwhile, Hamdok does not hide how greatly he is influenced by Ethiopia and its experience in promoting growth and development, which he underlined in his first media appearance [with Sudania24 on Aug. 24] in Sudan. This raises questions about Sudan’s position on the Nile water, one of Cairo’s most sensitive issues.”

Speaking to Al-Monitor on the sidelines of the recent meetings in Ain Sokhna, Sudan Revolutionary Front leader Yasir Arman said, “Several of Sudan’s neighboring countries wish to push forward the peace process on Sudanese territory, but a mechanism must be found to coordinate international and regional efforts so as not to have too many cooks spoil the broth.”

Several regional countries are deploying efforts to advance Sudanese peace negotiations, and Egypt has sought a role to coordinate these efforts.

He added, “Egypt has made an effort to coordinate between South Sudan, Saudi Arabia and the UAE. We are willing to extend this coordination to the international community.”

In addition to the security issue and uniting armed movements, the Sudanese government has several priorities, including the attempts to remove Sudan from the State Sponsors of Terrorism list, and achieve economic reform by raising the standard of living of the Sudanese citizen who suffered under harsh economic conditions during Bashir’s rule. In the official talks between the Egyptian and Sudanese prime ministers Sept. 18, there were several Egyptian promises to support Sudan economically and diplomatically.

A diplomatic official familiar with Egyptian-Sudanese relations told Al-Monitor on condition of anonymity, “The Egyptian diplomatic action now focuses a great deal on coordination with Sudan as the most important issue on the Egyptian foreign policy’s agenda to secure Egyptian interests in the southern neighborhood and the Nile waters.”

The official added, “Winning clear and frank positions from the Sudanese regime to support Cairo's positions in the Nile water issue — especially the negotiating position with Ethiopia on filling and operating the Renaissance Dam — is Egypt’s priority at the moment. Sudan's stances were pro-Ethiopia and against Egyptian interests throughout the periods of negotiations since the signing of the agreement on the Renaissance Dam in March 2015, which has been one of the reasons why agreements were yet to be reached.”

Amid action aimed at attracting Sudan to Egyptian positions, the new Sudanese government, headed by Hamdok, is still sensing a path to balanced external relations far from what Hamdok described in his first television talk with Sudania24 on Aug. 24 after taking power as a “regional hub war.”

In the interview, Hamdok said, “Foreign forces play a major role in Sudanese affairs now, even the political agreement and the Constitutional Declaration have been mediated by foreign parties. We praise this role and appreciate the help, but some interventions complicate the political scene even further.”

Speaking about Sudan’s foreign policy, he noted in the same interview, “We aspire to regional cooperation in order to break out of isolation. Foreign policy will be managed based on common interests.”

Egypt faces a serious task to intensify its efforts to achieve security stability in Sudan in order to ensure the protection of its southern surroundings and secure it from the control of armed movements, especially Islamic-oriented ones. It would have to attract the Sudanese government with common interests all the while ensuring its interests in the Nile waters, and this issue has become even more critical to Egypt after the failure of negotiations with Ethiopia about filling and operating the Renaissance Dam.