The Egyptian Ministry of Education dismissed some 1,000 teachers under the rationale that they had disseminated extremist ideas and belonged to the outlawed Muslim Brotherhood. 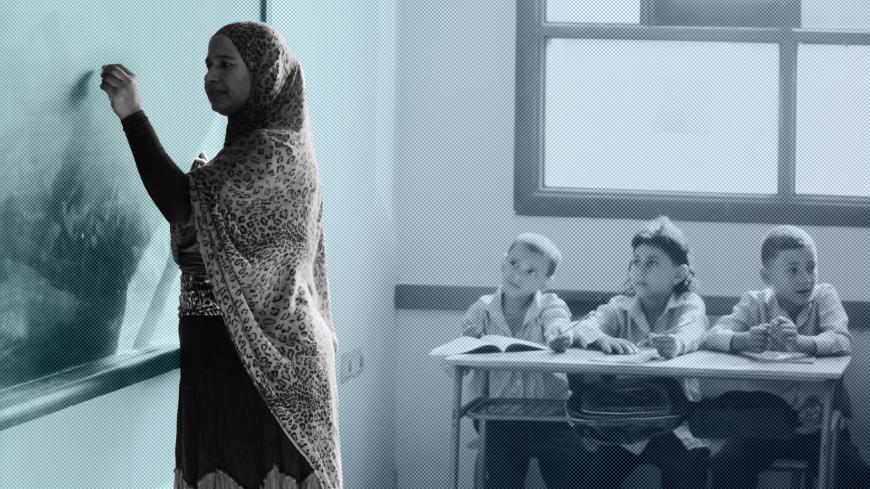 Students attend class as a teacher writes on the blackboard on the first day of their new school year at a government school in Giza, south of Cairo, Egypt, Sept. 22, 2013. - REUTERS/Mohamed Abd El Ghany

Egypt has announced the dismissal of 1,070 teachers for belonging to the terrorist-labeled Muslim Brotherhood after they were convicted in court, with some even sentenced to death. The announcement came as part of a government crackdown on extremist ideology and terrorism.

At an Oct. 7 press conference at the general office of Egypt’s Ministry of Education in Cairo, Education Minister Tarek Shawki said the ministry had decided to dismiss 1,070 teachers working in public schools because of their extremist ideas.

He said these teachers have been sentenced by courts; he said the dismissal of the teachers “aims to counter destructive and extremist ideas and preserve the future of students.”

Shawki said those fired were “unfit to be educators.”

Shawki also said that on Oct. 16, he will launch the largest electronic portal for teachers to apply for jobs at public and private schools in Egypt.

He said a new competition will be open for temporary one-year contracts with 120,000 teachers to fill the deficit at schools, provided that the required papers are submitted through the portal. The minister also said the Ministry of Education will finance these contracts from its financial resources.

Analysts and education experts say that the Muslim Brotherhood, since its inception in Egypt in March 1928, has focused on penetrating educational institutions. They have cited that the group's founder, Hassan al-Banna, was an Arabic teacher at an elementary school in Ismailia in northern Egypt.

Tarek Nour el-Deen, former undersecretary of the Ministry of Education, said the Muslim Brotherhood tried to penetrate state institutions, especially education, after the revolution of Jan. 25, 2011, taking advantage of the rise of political Islam to power before it was toppled in July 2013.

In TV statements Oct. 7, Egypt’s deputy minister of education for teacher affairs Mohamed Omar said the dismissed teachers had adopted extremist ideas. Some of the teachers had been sentenced to death before they were dismissed; others are fugitives.

"The Ministry of Education was hacked after 2011, and there was an attempt to breach the curriculum. Procedures are continuing to cleanse the system of the group’s members,” Omar said during a telephone interview on Sada el-Balad TV channel.

Some experts say that the existence of some Muslim Brotherhood members at Egyptian schools would cost the government billions of dollars in losses.

“Those members can cause damages to the education process, especially now since it is undergoing a modernization process. The students are using modern technology like tablets and those individuals can make it difficult for students to understand or use [those tablets] due to their political orientation,” Ahmed el-Shami, an economist and a professor of feasibility studies at Ain Shams University, told Al-Monitor.

However, Shami added that other future dismissal cases should take place using great care and without being unjust to some people.

“Thorough investigations should take place and those who have been 100% proven to be disseminating extremist ideas and have been sentenced in court should be dismissed,” he said.

Shami said that since teachers who were fired had already been sentenced to prison terms, their dismissal is routine.

Many students and parents saw the decision as necessary and essential. “Of course, I would not feel safe when my child is being taught about extremist ideology at school. Schools are places for promoting morals and good conduct and not disseminating ideas about terrorism and extremism,” Marwa Hussein, a mother of three children, said.

She added that the educational curriculum on religion at schools and also at universities such as Al-Azhar University should be closely monitored by the Egyptian Ministry of Education.

In 2018, a comprehensive development and overhaul of courses and curriculums in the various stages of education in Al-Azhar institutes — from kindergarten to high school — took place, especially in subjects covering culture, the law and Arab matters, according to the official website of Al-Azhar.

The overhaul also included the establishment of a specialized council for the development of pre-university education, Al-Azhar added.

However, a teacher who requested anonymity told Al-Monitor that the government move comes as part of efforts aimed at reducing the number of civil servants and thus reducing costs. “It is actually both about strangling political freedoms and at the same time reducing the burden on government expenses,” he added.