As the Berlin conference to resolve the Libyan crisis approaches, members of Libyan House of Representatives met in Cairo in an attempt to rally support for Field Marshal Khalifa Hifter. 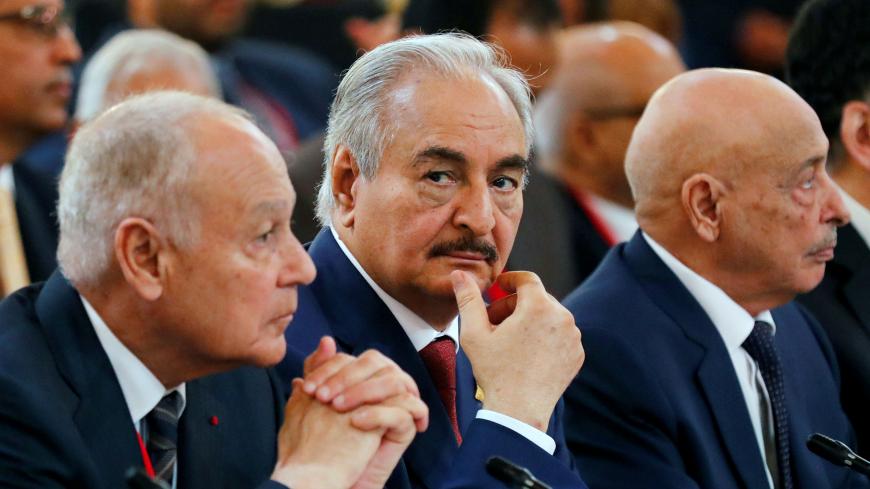 Khalifa Haftar (C), the military commander who dominates eastern Libya, and Aguila Saleh Issa (R), president of the eastern Libyan House of Representatives, attend an international conference on Libya at the Elysee Palace in Paris, France, May 29, 2018. - Etienne Laurent/Reuters

CAIRO — Cairo hosted another two-day meeting bringing together members of the Libyan House of Representatives to discuss the country’s political crisis. The Oct. 18-19 summit was held in anticipation of a UN-sponsored conference in Berlin scheduled for early November to settle the crisis. The meeting’s concluding statement noted that it was a continuation of the first one held in Cairo July 13, “in light of conditions that made it hard for parliament to operate normally, particularly since the pressure exerted on its administration and the attempt to divide and thwart it increased,” in reference to the pro-Government of National Accord (GNA) lawmakers who defected in May in protest against the offensive it launched in April against the pro-GNA armed groups in Tripoli.

A day prior to the meeting, the pro-GNA members of parliament announced that they would not partake in it. They wrote in a Oct. 16 statement of which Al-Monitor secured a copy that Egypt is not an appropriately neutral party to sponsor the initiative.

The 90 parliament members in attendance welcomed the international efforts to resolve the Libya crisis, yet adamantly rejected any attempt to bypass the parliament.

Observers and officials indicated that the meeting seeks to unify parliament following the defection of the pro-GNA members of the house, and to coordinate positions with Cairo, which supports Libyan National Army chief Khalifa Hifter, as the Berlin conference approaches.

The Hifter-led campaign showed that there is a sharp international divide over the Libyan crisis. The operation killed more than 1,000 people, wounded more than 5,000 and displaced 120,000 civilians. Amnesty International has accused both sides of war crimes.

Al-Mabruk al-Khotabi, a member of the Libyan Parliament, indicated that the meeting is a part of the Hifter's efforts to gain political support for the Berlin conference. He told Al-Monitor over the phone that the military escalations in Tripoli are intended to maximize gains on the ground prior to the conference.

He added that in contrast, the other party, the GNA, “is not easy prey and continues to withstand” the military offensive.

Rakha Hassan, a member of the Egyptian Foreign Affairs Council, agrees with Khotabi. He told Al-Monitor that the last meeting in Cairo was held to coordinate positions and seeks to unify parliament members to support Hifter and strengthen his front and negotiation cards prior to the conference in Berlin. He added that Egypt and the UAE are Hifter’s regional supporters in the face of the GNA that includes the Muslim Brotherhood and is backed by Turkey and Qatar.

Kamel Abdallah, a researcher focusing on the Libyan affairs at Al-Ahram Center for Political and Strategic Studies, believes that the last meeting in Cairo came to bridge the gap in parliament that resulted from the last military operation against the capital. He pointed at the defection of the pro-GNA members of parliament and their quest to attract more members to their ranks. He told Al-Monitor that Egypt rushed to convene a meeting to contain the parliamentary divide and keep Hifter’s political front strong.

UN envoy Ghassan Salameh has intensified meetings with multiple sides and parties in Libya in preparation for the Berlin conference. Berlin hosted an unpublicized meeting in September involving representatives from the United States, Britain, France, Italy, Egypt, Russia, Turkey, the African Union and the Arab League.

Washington announced Oct. 18 that it will take part in the Berlin conference after increasing efforts since August to end the fighting and support UN initiatives to reach a political solution.

Khotabi believes the Berlin conference will likely fail to resolve the crisis. He said, “Similarly to the previous conferences such as the ones in Paris and Palermo, this conference will not bring much change. The delegations will be welcomed, a cease-fire will be reached and the war will be resumed afterward.”

Khotabi said, “The crisis will be resolved with one of the battling parties in Tripoli tipping the balance to its advantage, taking control over the rest of the country and tightening its security grip. This will be followed by a UN-sponsored national reconciliation and the holding of legislative and presidential elections.”

Abdallah linked the conference’s success will depend on the UN Security Council in addition to Italy, the UAE, Egypt, Turkey and Germany agreeing to a radical solution to the conflict before calling on the Libyan sides to join the negotiation table.

He said that signs from the preparations for the Berlin conference indicate that some internal Libyan and regional parties will be excluded from an anticipated settlement in an international effort to redesign the Libyan political landscape.