As the Libyan National Army accused the Government of National Accord and Tripoli-based National Oil Corporation of spending its revenues on mercenaries to fight along their ranks, the tribes in eastern Libya shut down multiple oil ports and demanded a new distribution of oil revenues. 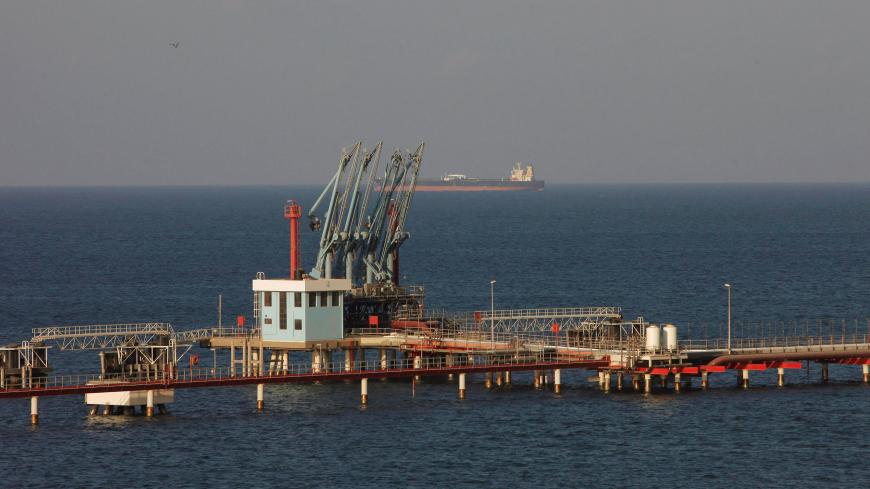 A view of pipelines and a loading berth of the Marsa al-Hariga oil port in the city of Tobruk, east of Tripoli, Libya, Aug. 20, 2013. - REUTERS/Ismail Zitouny

A new weapon is being used as a means of pressure in the Libyan conflict. Namely, Libya’s oil. The Tripoli-based National Oil Corporation (NOC) declared Jan. 18 force majeure due to the closure of oil ports in eastern Libya, which the Libyan National Army (LNA) controls.

The NOC accused the LNA, led by Field Marshal Khalifa Hifter, and affiliated Petroleum Facilities Guards of giving orders to halt oil exports from Libya's oil ports of Hariga, Brega, Ras Lanuf, Zueitina and Es Sider in the eastern part of the country.

The force majeure event exempts the NOC from liability in case it fails to fulfill its oil delivery obligations under the contracts.

In response to the US Embassy’s call for work resumption, the NOC replied Jan. 21 that oil operations would only resume when the closed ports in eastern Libya reopen.

LNA spokesperson Maj. Gen. Ahmed al-Mismari said Jan. 18, “The Libyan people are the ones who shut down the oil ports and fields and stopped the export of oil. We just have to protect our people. …"

Speaking to Agence France-Presse, leader of the Zouaya tribe Mayor Senussi Haliq az-Zawi announced Jan. 17 the closure of oil ports, adding "it is designed to dry up the sources of terrorism financing with oil revenues," in reference to preventing the Government of National Accord (GNA) from spending oil revenues on fighters coming from abroad.

The LNA, represented by the Petroleum Facilities Guard, is tasked with securing oil facilities. Yet all of the revenues generated from oil production go to the Tripoli-based and UN-recognized NOC.

Although the countries taking part in the Libya peace conference in Berlin Jan. 19 have all demanded that all conflicting Libyan parties abstain from hostilities against oil sites and infrastructure, Libya’s oil ports were closed on the eve of the Berlin conference.

Libya’s pro-LNA tribal leaders and notables affirmed at their Jan. 24 meeting that oil ports will only open after the GNA is brought down, oil revenues are fairly distributed and a caretaker government is formed.

The Tripoli-based NOC indicated in a statement Jan. 25 that the closure of oil ports and suspension of oil operations dropped oil production to 320,000 barrels per day, down from 1.2 million barrels per day — a fall of 75%.

Youssef al-Aqouri, head of the parliamentary committee following up on the NOC performance, said the closure of some of the ports in eastern Libya is part of a popular movement to demand a fair and transparent distribution of oil revenues. This is added to the demand that the GNA be held accountable for its spending, particularly since it was accused of bringing in mercenaries to fight alongside its forces in cooperation with Turkey, he added.

Speaking to Al-Monitor, Aqouri said oil has turned into a popular weapon against the GNA. He explained that the LNA-held areas are suffering from hard conditions because they are not obtaining their financial allocations.

He indicated that “the committee's endeavors to end the oil company’s divide have failed because the GNA insists on taking over the oil wealth. Yet we hope the recent UN-sponsored economic dialogue results in finding mechanisms that would guarantee a fair distribution of revenues among the different parts of the country. This is because we believe the Tripoli-based NOC is monopolized by militias and is not operating fairly.”

The United Nations held a meeting in Tunis Jan. 7, bringing together the Libyan parties to discuss the economic course, the oil crisis, and how to unify the divided economic and oil institutions.

Libyan parliament member Ali al-Saidi told Al-Monitor that shutting down oil ports reflects popular anger at the GNA practices and agreement it reached with Turkey to bring in mercenary fighters and pay them from the revenues of Libya’s oil wealth.

He said the Libyan people, particularly those in eastern and southern Libya, are being marginalized when it comes to oil revenues. The GNA is practicing punitive policies against these areas because they back the LNA, he added.