Erdogan's Syria plan: Resettling the Syrian refugees or ousting Kurds from their land?

Turkish President Recep Tayyip Erdogan's remarks in United Nations indicate that Turkey has dangerous intentions about the east of Euphrates. 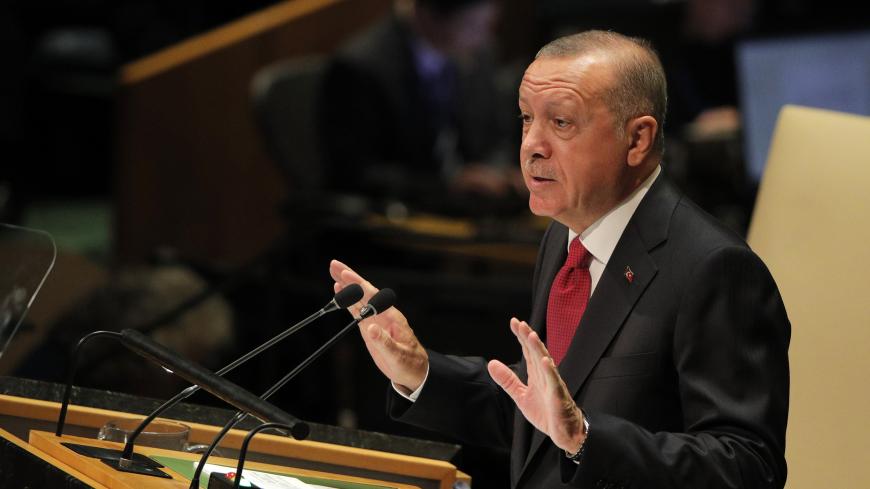 Turkey's President Recep Tayyip Erdogan took the rostrum at the United Nations General Assembly and delivered a colorful address full of theatrics and accompanied with maps. In his speech, he contested the legitimacy of Israel’s frontiers and also disclosed Turkey’s project to create a safe zone in northeastern Syria that would seemingly resolve, in a radical way, the problem of Syrian refugees.

Erdogan sounded consistent with his previous statements regarding the creation of a Turkish-controlled safe zone about 20 miles (32 kilometers) deep that would extend parallel to Turkey’s border with Syria for about 480-490 kilometers (some 300 miles).

However, there was also a new element: extension of a Turkish-controlled safe zone southward to near Deir ez-Zor, going far beyond the proposed 20-mile depth that already had become an issue of contention between Ankara and Washington. Before disclosing this objective of establishing an expanded safe zone in northeastern — and now also in eastern — Syria, he mentioned his repeated target of eliminating the governance of the Syrian Democratic Forces (SDF) in the area. Ankara considers the SDF to be a threat to Turkey's national security; Turkey sees the People's Protection Units (YPG), which leads the SDF, as an extension of the outlawed Kurdistan Workers Party (PKK).

“The third important issue is the elimination of the PKK-YPG terrorist structure in the east of the Euphrates, which occupies a quarter of Syria and tries to legitimize itself under the name of the so-called Syrian Democratic Forces. We will not be able to find a permanent solution to the issue of Syria if we fail to deal with all terrorist organizations in this country from the same distance,” Erdogan said.

“Our talks with the United States with a view to establishing a safe zone in Syria continue. We intend to establish initially a peace corridor with a depth of 30 kilometers and a length of 480 kilometers and enable the settlement of 2 million Syrians there with the support of the international community. If we could extend the depth of this region to the Deir ez Zor-Raqqa line, we could increase up to 3 million the number of Syrians, who would return from Turkey, Europe and other parts of the world to their lands in Syria. As we are determined on this matter, we have already started necessary preparations,” he added.

Those preparations he alluded to were clearly the military buildup of Turkish armed forces along the Syrian border. Erdogan only a week ago had issued a threat of military intervention, saying that if the safe zone with a depth of 20 miles was not decided upon within two weeks, Turkey would act unilaterally. Many observers interpreted his remarks as being hopeful of getting an endorsement from President Donald Trump, whom Erdogan wanted to meet with in New York during the proceedings of the UN General Assembly.

Yet he could not get a formal one-on-one meeting with Trump. The Turkish government said they did speak by phone Sept. 22, and the two met at a Sept. 25 reception. Trump referred to Erdogan as a "friend of mine" at a UN religious freedom event Sept. 23.

At a first glance, Erdogan’s plan for resettling refugees in Syria is a very strong sweetener for the EU, which has long been trembling about the specter of a greater refugee flow from Syria to the old continent. If the territory of Syria itself could hold such a huge number of refugees, who could practically and morally be against it?

A closer scrutiny of Erdogan’s statements and the Turkish strategic outlook concerning Syria show that little was unprecedented in Erdogan’s General Assembly speech. A previous column of mine discussed an enlarged safe zone articulated by Erdogan and quoted a news agency as saying Erdogan wanted to transport Kurdish oil through Deir ez-Zor.

The former US envoy for Syria, Brett McGurk, tweeted after Erdogan’s UN speech, “Earlier this year in @Foreign Affairs, I noted that Erdogan’s ‘safe zone’ is really a plan to extend Turkey’s southern border 20 miles into Syria (left). Today, before the UNGA, he confirmed as much with a map (right). The territory happens to cover all the Kurdish areas of Syria.”

Erdogan's speech drew other reactions. Marc Pierini, a former EU ambassador to Turkey and an astute observer of Turkish foreign policy, tweeted, “The undocumented assertion that 2-3 million people can live in the area mapped here makes no sense to anybody who ever traveled to these baren lands [I have].”

The SDF, the Kurdish-dominated Syrian group that has partnered with the US military and that rules and operates in the area Erdogan craves to be a Turkish-controlled safe zone, also reacted with a tweet that said, “Turkish president announces plans to #UNGA for mass human rights violations in NE #Syria. He plans to strip people of their land and force demographic change.”

Indeed, Erdogan’s plan for northeastern Syria cannot be implemented and ultimately achieved unless it entails a drastic demographic change. If the Turkish military incursion into the east of Euphrates ever happens, the Turkish forces, apart from facing the battle-tested forces of the SDF, will have to encounter a presumably unfriendly population in order to resettle the millions of Syrian refugees who have fled from elsewhere in Syria.

The map Erdogan waved at the General Assembly showing where 2 million Syria refugees are envisaged to be resettled faces major obstacles. As the area is predominated by Kurdish communities, it seems almost impossible to find a space for the refugees unless a removal and relocation of its indigenous Kurdish residents takes place. It is beyond any doubt that any undertaking in this respect would be nearly impossible to implement peacefully.

The possibility of Turkish military action going even beyond the presumed area southbound to the environs of Deir ez-Zor, with the ambitious aim of resettling 3 million Syrian refugees, thus sounds a pipedream at this juncture.

Despite this, an adventurous and a miscalculated move from Erdogan should never be ruled out.

He is desperate to revitalize the Turkish economy and his main economic power base and the engine for previous economic growth in Turkey has been the construction sector. Northeastern Syria could be a bonanza for Turkish construction companies that are very supportive of Erdogan.

Moreover, he needs a national cause to rally the public and also prevent the erosion of his party. His declared intention to resettle Syrian refugees in northeastern Syria has to be taken seriously. But it is hard to see this happening without uprooting and dispersing the Kurdish population of northeastern Syria, which would bring about drastic demographic change and a new humanitarian disaster.