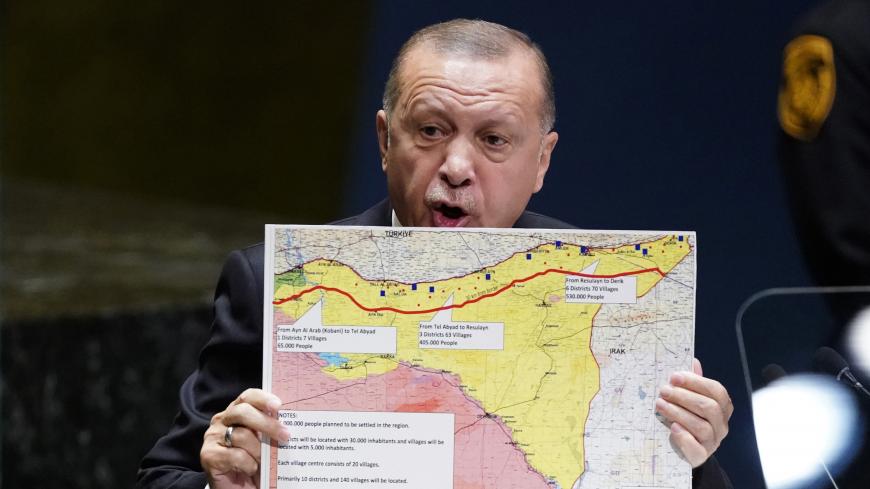 Turkey's President Recep Tayyip Erdogan holds up a map as he addresses the 74th session of the UN General Assembly at UN headquarters, New York, US, Sept. 24, 2019. - REUTERS/Carlo Allegri

Turkey is not fully satisfied with the joint operations center set up on the Syrian border in cooperation with the United States. In Turkey's view, the center restricts a comprehensive, all-out operation east of the Euphrates against Kurdish forces that Turkey considers a threat to its national security.

The Turkish-American joint patrols began Sept. 8, yet the depth of the area under patrol does not match Turkey's expectations. The Turkish government led by President Recep Tayyip Erdogan has insisted on a safe zone with a depth of 30-40 kilometers (18-24 miles) while also articulating a new target: to transform the entire east of the Euphrates — from Raqqa to Deir ez-Zor — into a “peace corridor,” and to transfer 3 million refugees from Turkey to the safe zone.

Turkish Defense Minister Hulusi Akar said the goal is to set up permanent bases in northern Syria as Turkey has done in northern Iraq.

“We will build patrol bases to the east of the Euphrates," Akar said. "Shall we stop there? No. Our goal is to create a 30-40 kilometer safe zone along the border. Then by constructing homes we will encourage the Syrians to return. These will be joint US-Turkish bases. We want them to be permanent. They could be similar to ones in northern Iraq. Their locations and numbers will be decided as negotiations advance. If the US tries to stall, then our B, C plans are ready.”

Turkey began to consider the establishment of a joint operations center with the United States on Aug. 7. This followed US-Turkish bargaining, which was instigated by the amassing of Turkish tanks on the border facing Tell Abyad and Kobani. Although the bar was raised soon after, that was not a surprising move by Turkey. Three weeks after the accord, President Erdogan said that even if the Americans were not pleased by Turkey’s plan for a safe zone, they nevertheless went along with it.

Turkey and the United States conducted their sixth joint air patrol Sept. 21 within the context of the accord to establish a safe zone east of the Euphrates. The Turkish side labeled reports of the Syrian Defense Force’s (SDF) withdrawal and destruction of fortifications of the Kurdish People's Protection Units (YPG) “a show.”

Erdogan in recent days has repeated his warning: “If no solution is found in two weeks to open the way for Turkey, we will implement our own operation plans.” He is attaching major importance to the meeting he hopes to have with President Trump, though that meeting is still not fixed and awaits Trump's decision.

Erdogan made critical comments before his departure to New York, emphasizing that if the United States stalls the process, then Turkey, as it did in al-Bab, Jarablus and Afrin, will unilaterally act to establish a safe zone and launch a military operation east of the Euphrates.

Erdogan spoke of settling refugees in this area. He reiterated his claim that “the true owners of this area, about 85-90%, are Arabs,” thus prompting fears of ethnic cleansing among the Kurds.

Also attracting notice were the orders issued by the Ministry of Health to its personnel as part of preparations for a military operation in Syria. The Turkish government canceled the leave of doctors in Sanliurfa, and extra doctors were summoned to Sanliurfa and Mardin from 19 provinces in preparation for a possible military operation.

Erdogan's reversion to pressuring the United States is influenced by the understanding it came to with its Astana partners, Iran and Russia. The final communique of the Sept. 16 Ankara summit reflected a major change in the cautious approach of Russia and Iran. They rejected Kurdish self-governing initiatives under the pretext of combating terror, which aims to weaken the territorial integrity and sovereignty of Syria.

Simultaneously, a letter from the Syrian Foreign Ministry to the UN Security Council described the SDF as “a terrorist militia serving as subcontractors to the US” in a way that complemented the image Ankara wanted to create.

Will Erdogan be able to snatch a concession from Trump, who has promised him a 20-mile safe zone? If Erdogan doesn’t get a green light from Trump by the end of September, will Turkey take unilateral action?

Turkey, which has amassed troops along the border several times, but refrained from taking action, is not likely to launch an operation without coordinating with the United States. If Trump heeds the advice of his subordinates who handle the Syrian file, he will likely not please Turkey.

At a Sept. 21 press briefing, the messages of US Brig. Gen. Christian Wortman and director of anti-Islamic State operations Scott Naumann further angered Erdogan. First, they stated that the United States will continue to supply the SDF with weapons and ammunition. Second, the United States is focused on the space between Tell Abyad and Ras al-Ain, an area that bears importance for the United States. Third, if one objective of the joint operations center is to overcome Turkey’s security concerns, another objective is to restrict unplanned military operations that will impede the struggle against the Islamic State.

Meanwhile, the United States is making progress in its efforts to persuade its allies to join the process east of the Euphrates for the benefit of the Autonomous Administration of North and East Syria. For example, on Sept 16-20, a 13-person British delegation had meetings in northern Syria.

Officials from the French and German foreign ministries visited Raqqa Sept. 18 and then discussed the situation of the area with autonomous administration officials at Ain Isa.

At the same time, Ilham Ahmed, the chairman of the Democratic Syria Assembly, and Elizabeth Gewriye, the deputy chairperson of the Autonomous Executive Council, traveled to Washington to lobby. SDF commander Mazlum Kobani said the SDF would not allow the depth of the safe zone to exceed 14 kilometers.

Turkey, which faces sanctions for its purchase of the Russian S-400 missile system, must have solid justifications to obtain Trump’s backing to oppose the sanctions and to oppose Pentagon's and Congress' stances for Syria.

At the moment, Turkey is working hard to force Trump to make an impulsive decision, with the hope that perhaps this will work. Yet what if it doesn’t work? Does Turkey really have alternative plans?