Details are emerging of a safe-zone road map between the United States and Turkey in Syria. 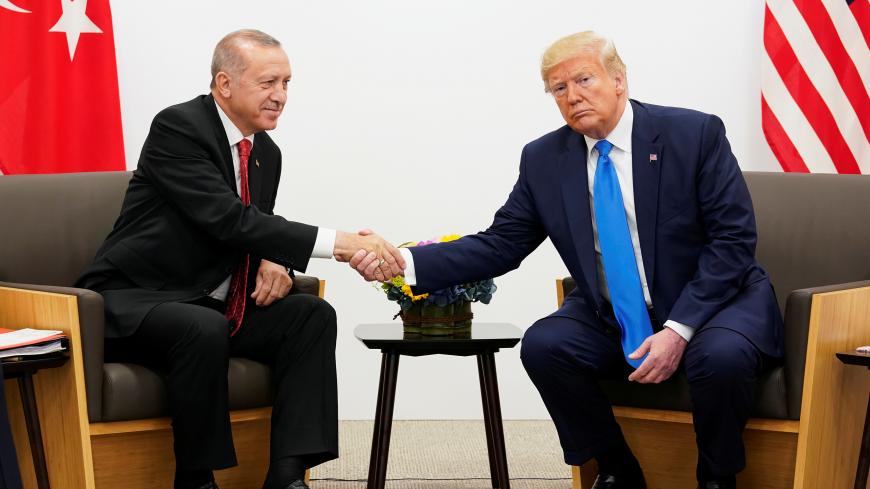 Critical military talks between Turkey and the United States appear to have delayed an imminent Turkish military operation against Syrian Kurdish groups east of the Euphrates. The talks, held in the first week of August, have produced major gains for Ankara: new measures to meet Turkey's security concerns; establishment of a joint mechanism with the United States on Turkish needs; and US assurance to form a “peace corridor.”

Washington is satisfied to have prevented a unilateral military move by Ankara and to know that, despite mishaps, Turkey is still determined to maintain its cooperation with the United States.

It's a diplomatic success for Washington to have prevented a unilateral move east of the Euphrates. For the past year, Turkish President Recep Tayyip Erdogan has insisted that a Turkish operation could be launched at any moment. How did the United States get Ankara to agree while Erdogan voiced such threats? Deniz Zeyrek, a veteran defense correspondent, cited information provided by diplomats and pointed to the role of Defense Minister Hulusi Akar in the affair. One such diplomat told Zeyrek that Akar “managed the negotiations with a cool head.” The diplomat stated that Akar “assumed the role of the Ministry of Foreign Affairs. He softened reactions of Ankara and prevented the process from becoming a military crisis with the US.”

Ankara’s main success was to secure the marginalization, if not total elimination, of the military capabilities of the Kurdish People’s Protection Units (YPG). Furthermore, it succeeded in denying the Kurds military access to the Turkish border. Ankara did all this without resorting to a risky and expensive military adventure, and all with the cooperation of the United States. In Ankara, even in the ranks of the Turkish Armed Forces (TSK), a sizable group believes this joint operation with the United States is too vague, open-ended, and against Turkish interests. They believe that the United States will eventually force Turkey to recognize the de facto legitimacy of the Kurdistan Workers Party (PKK). Both President Erdogan and Akar have firmly stated their support for cooperation with the United States.

But not everyone in Ankara and Washington is confident that a train wreck has been averted. Plenty of people in both capitals are pessimists who believe this cooperation will never work.

For example, former commander of the Joint Syria Task Force, Brig. Erdal Sener, who retired a week ago, openly voiced his disagreement. He stated that cooperation with the United States will be costly to Turkey.

In the last session of the Higher Military Council, Akar either forced the retirement or transfer of generals who did not favor cooperation with the United States.

What was discussed in the latest US-Turkey talks?

We understand that this agreement will not be easy or quick to implement. With its obscure points, it will have to be sorted out step by step.

Sources in Ankara made some important points. Neither Ankara's nor the United States' safe zone dimensions were accepted during the talks. Ankara sought a 40-kilometer (25-mile) wide and 380-kilometer (236-mile) long line from Suruc to Cizre (east of the Euphrates on the Turkish side), and Washington proposed a 7-10 kilometer (5-7 mile) deep and 140-kilometer (86-mile) long line from Kobani and Qamishli on the Syrian side. To avoid deadlock, the sides agreed to go ahead without sorting out the zone's dimensions.

Both Ankara and Washington prioritize the establishment of a joint operation center, probably in the city center of Urfa, where the Syria Joint Task Force Operation Center is located, and a coordination center in Ankara. These centers will eventually decide the access routes of Turkish units to the east of the Euphrates. In these locations, the US and Turkish observation posts will be constructed; the Kurdish YPG will withdraw under supervision of the US military; and the YPG will hand over its heavy weapons, artillery, mortars and multiple rocket launchers to US soldiers. The centers will also facilitate the coordination of the air space and security matters in town centers. Of course, at least 50-60 US military personnel will come to Turkey to carry out these functions.

The United States and Turkey also decided that Turkish units will not pass through the urban settlements of Kobani, Qamishli and Tell Abyad. Instead, Turkish units east of the Euphrates will cross through and operate in rural terrain, where contact with civilians will be minimal. US-Turkish military checkpoints will control entry and exit from urban settlements.

Sources in Ankara said the United States asked for more time to coordinate the withdrawal of YPG elements and their heavy weapons to the south of the M4 freeway. Turkey has observed this carefully. If, in coming days, we read news reports that the YPG is withdrawing in convoys from the area between east of Kobani and west of Tell Abyad, we will know that the US Army is carrying out its duties.

Definite red lines were emphasized in the meetings, including: to never allow US and Turkish soldiers to confront each other in armed clashes, and for Turks to guarantee the safety of US troops and for Washington to do the same for Turkish troops.

When will the Turkish troops enter the safe zone? After the YPG withdraws after the Eid al-Adha holidays, Turkish troops will enter at the end of September, once the area is deemed safe.

Post-conflict reconstruction projects will then be launched for majority Sunni Syrian Arabs who had emigrated to Turkey from east of the Euphrates. International media have reported that some Syrian refugees from Turkey will be transferred to the areas east of the Euphrates that they had abandoned.

Can Ankara and Washington maintain this fragile cooperation? I believe others are wondering the same thing, from the Syrian Kurds to Moscow — which has agreed to cooperate with Turkey — and Iran in Idlib. Before, Washington was watching Moscow west of the Euphrates. Now, it is Moscow’s turn to watch Washington.