Benny Gantz: the lesser of two evils for Palestinians

The Joint List’s decision to recommend Blue and White party Leader Benny Gantz as a candidate for prime minister sparked wide controversy both across Palestinian territories and in Israel. 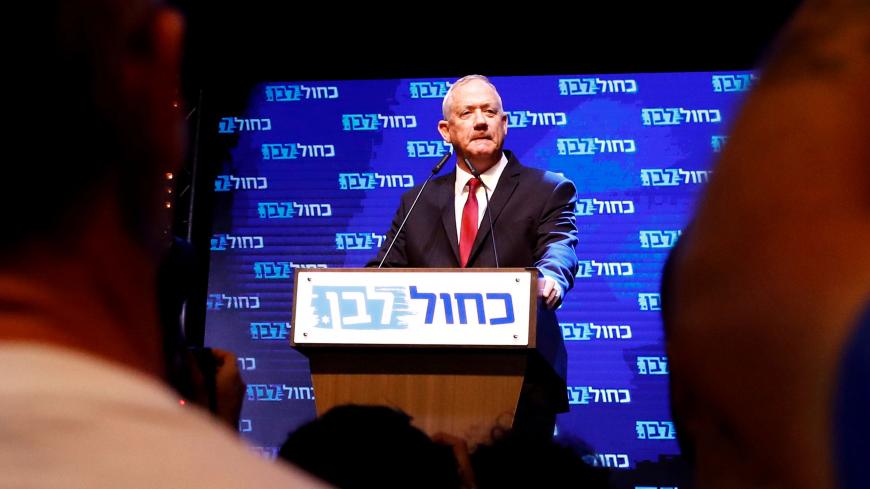 The Joint List announced Sept. 22 its decision to recommend Blue and White party leader Benny Gantz as a candidate for prime minister. Its decision, a first for Arabs in Israel, sent shockwaves through the West Bank and Gaza, not just inside Israel.

The alliance, formed by several Arab parties in Israel — namely the Democratic Front for Peace and Equality, the southern branch of the Islamic Movement, the Arab Movement for Renewal and the National Democratic Alliance — won 13 seats in the Israeli elections Sept. 17, thus becoming the third largest party in the 120-member Israeli Knesset.

Joint List member Osama Saadi told Al-Monitor, “Our recommendation aims at overthrowing Benjamin Netanyahu and preventing him from maintaining his program of annexing the Jordan Valley and the West Bank settlements. We do not believe Gantz to be a symbol of peace, but he was chosen based on the lesser of two evils principle. The decision was taken following extensive discussions, and it was opposed by some members of the list whom we respect.”

Hamas spokesperson Hazem Qassem told the Gaza-based Safa news agency Sept. 23 that “it is surprising for Palestinians to bet on an extremist Zionist party. The Blue and White party denies us our rights and incites aggression against Gaza. Its leaders committed crimes against us. Gantz was the Israeli army's chief of staff who oversaw the 2014 offensive on the Gaza Strip.”

For his part, Hamas political bureau member Mohammad Nazzal took to Twitter on Sept. 22 to say, “It is regrettable that some Arabs are paving the way for Gantz, who is being portrayed as a symbol of peace, even though he led the terrorist army that launched the Gaza aggression in 2014 and then proudly said that he [returned it] to the Stone Age.”

Unlike Hamas, Palestinian President Mahmoud Abbas announced Sept. 19 during his visit to Norway that he rejects any Israeli government headed by Benjamin Netanyahu.

Omar al-Ghoul, who was an adviser to former Palestinian Prime Minister Salam Fayyad, wrote in the Palestinian Authority's (PA's) Al-Hayat Al-Jadida newspaper on Sept. 19 that “by supporting the Joint List, the Palestinian masses were able to weaken Netanyahu's chances of forming a government, and this is the most important result that has been achieved in the Israeli elections.”

Ibrahim Abu Jaber, a Palestinian political analyst in Israel, told Al-Monitor, “Some Palestinian parties may have tried to influence the list to nominate Gantz. In addition, some Arab [parliament members] may have their eyes set on some ministerial seats or parliamentary committees in the Knesset.”

Palestinians seem to be increasingly inclined to believe that the Joint List’s recommendation of Gantz may accelerate a split within the list, which consists of a heterogeneous ideological and political mixture of nationalist, communist and Islamic forces that have divergent positions on many issues.

Wasel Abu Yousef, a member of the PLO's Executive Committee, told Al-Monitor, “We do not interfere in the Israeli elections. We believe that the Arab Knesset members take several factors into consideration when nominating the person they deem appropriate to form the Israeli government. However, our position is against any government that denies us our rights, pursues the settlement policy and applies the deal of the century.”

Imad Abu Awad and Mohammed Watad, both Palestinian writers, believe that the list erred by nominating Gantz because he is no different from Netanyahu as far as hostility toward Palestinians is concerned. The list will be a partner in any Israeli aggression on Gaza despite the fact that the PA placed pressure on it to recommend Gantz in order to set the stage for new political negotiations.

Mustafa al-Sawaf, former editor-in-chief of the local Felesteen newspaper, told Al-Monitor, “The recommendation is wrong and paves the way for the political fragmentation of Arabs in Israel after they were united behind a joint list. The list took the decision after the PA issued signals whereby it wanted an alternative to Netanyahu, no matter how bad this alternative was. Hamas’ refusal to recommend Gantz goes in line with the orientation of most of the Palestinian people, who view him as a criminal threatening Gaza.”

On Sept. 24, the Popular Front for the Liberation of Palestine called on the joint list to “rectify its position, because betting on any changes in Israeli policy and ideology through Gantz instead of Netanyahu is a mere illusion.”

Khader Habib, an official from the Palestinian Islamic Jihad, said Sept. 20, “To us, there is no difference between Netanyahu and Gantz. They are both criminals and thieves of our land, and our resistance has nothing to do with the existence of an Israeli criminal or another.”

Al-Monitor learned from Arab circles in Israel that “Ahmad Tibi, a list member close to President Abbas, received calls from the PA on Sept. 21-22 to exert influence on the list members to recommend Gantz, and this is what happened.”

No one knows how the Joint List recommendation will unfold. In this context, the question arises as to whether Gantz will form a new government backed by Arabs within the Knesset or a national unity government with the Likud and Jewish parties, which refuse any Arab support for their government. This will leave the Joint List in an unenviable position.