Though the Joint List won 15 Knesset seats in the March elections, the new unity government leaves it on the opposition benches once again. 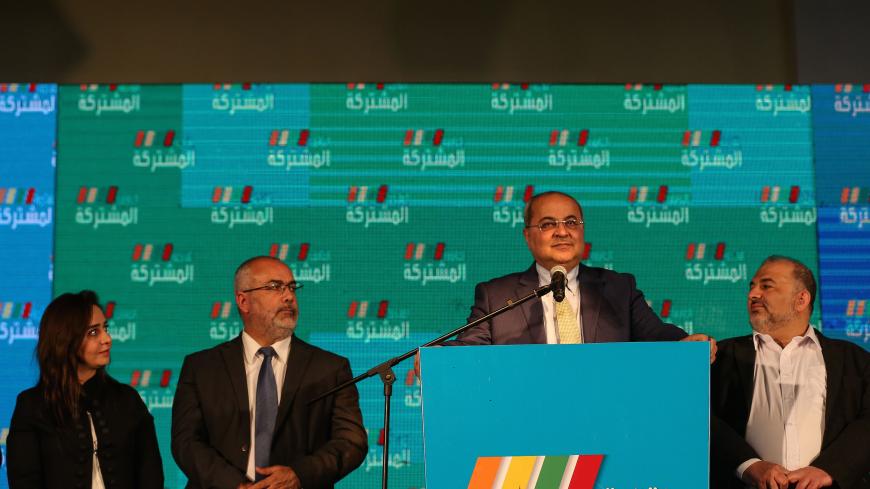 Israel’s new government, its biggest ever, was sworn in on May 17. It has all kinds of newly invented portfolios, such as the Ministry of Community Empowerment and Advancement and the Ministry of Higher Education. Meanwhile, the pro-settler Yamina Party led by Naftali Bennett found itself heading to the opposition benches, creating a fascinatingly diverse opposition. It includes everyone from the Joint List and Meretz on the left, Yesh Atid-Telem in the center and Yisrael Beitenu and Yamina far to the right. Knesset member Ahmad Tibi tweeted, “I’m considering voting no confidence in the opposition if Yamina gets squeezed into it.”

The situation raises new questionw. What will be the Joint List’s role in the opposition? Does the number of Knesset seats it won in the last election matter? It is worth remembering that with 15 seats, the Joint List came very close to playing a decisive role in determining who would govern the country. It would have happened if Blue and White leader Benny Gantz  had formed a minority government, after the Joint List endorsed him during its meeting with the president.

The Joint List submitted its own candidate, Ahmad Tibi, for Knesset speaker, showing the depth of diversity within the opposition. The Joint List announced, “There is no homogeneous opposition. Together with our electorate, we have political positions that set us apart and distinguish us from the rest of the opposition parties.”

Meanwhile, Yesh Atid-Telem proposed another Knesset member, Karin Elharar, for speaker. The opposition was obviously split with 20 members voting for Tibi while 23 others voted for Elharar. The coalition's Yariv Levin reaped the benefits and won the nomination.

Knesset member Jaber Asaqla of the Joint List's Hadash faction told Al-Monitor, “We will not abandon our principles. We will not work hand-in-hand with Yesh Atid-Telem on all issues.” When discussing the items on the Joint List’s agenda as an opposition party, he said, “The fact that there is a coalition government with 73 seats points to all the hard work ahead of us in the next Knesset. The hot topic facing us is President Donald Trump’s 'deal of the century,'  which includes the annexation of parts of the West Bank. We will use all the tools at our disposal to oppose that process. There are also internal issues such as violence in Arab society, police brutality against Arab citizens, planning and construction and the repeal of the Kaminitz law [making it easier to demolish Arab homes built without permits] and the nationality law, even if there is very little chance of that happening given the make-up of the current Knesset. And, of course, we can’t forget the harsh economic situation, especially with Arab society accounting for over 200,000 of unemployed Israelis."

This will be a great challenge and the source of enormous frustration for the Joint List. It may have won a record number of seats, but its daily work is about to focus more on rhetoric and statements to the media than it will on action, lacking sufficient tools to influence decisions. Nevertheless, its voters expect the party to integrate into the circles of decision-makers and get something done.

Still, not only is the opposition heterogenous; so is the coalition. And it is the Likud-Blue and White government's diversity that could offer the Joint List will some chances to influence the government, especially when Netanyahu need its votes on some issue or another. In 2019, Netanyahu presumably got two opposition votes in favor of his candidate for state comptroller, Matanyahu Engelman. The Likud claimed two Joint List candidates quietly supported Engelman in exchange for budgets for some Arab localities.

The Arab public might not oppose cooperation with the government in exchange for certain benefits for the Arab community. For example, there is Resolution 922, also known as the Five-Year Economic Development Plan for Arab Society. Members of the Joint List worked together with the various ministries to advance that plan.

Yoav Stern, a journalist and former commentator on Arab affairs for Haaretz, told Al-Monitor that there is indeed an opportunity for political collaboration with the government on all sorts of issues. "There are now calls in Arab society to participate in the decision-making process. Parts [of the Joint List], but not all of it, may end up cooperating with the government and Netanyahu.” Stren added, "I contend that the Joint List and the center-left parties still haven’t fully taken advantage of the pool of votes within Arab society, especially given the fact that the Arab public wants to integrate into society and have an impact on it.”

Still, it is important to remember that Yamina is joining the opposition, which could change the game as far as Arab society is concerned. The 2013 alliance between Yesh Atid leader Yair Lapid and Yamina leader Naftali Bennett that forced Netanyahu to include both in his government could be revived now, as evidenced by Lapid’s reaction to a May 13 Facebook post by Bennett, announcing Yamina's departure from the coalition. Lapid responded: “Welcome, brother! Religious Zionism never should have been a bulletproof vest in the first place for someone suspected of committing a crime.” The big question is whether in the long run Lapid will prefer to join forces with Bennett or cooperate with the Joint List.