Even though Palestinians have lost trust in the Palestinian Authority, analysts believe they will not go as far as demanding its collapse as there is no alternative. 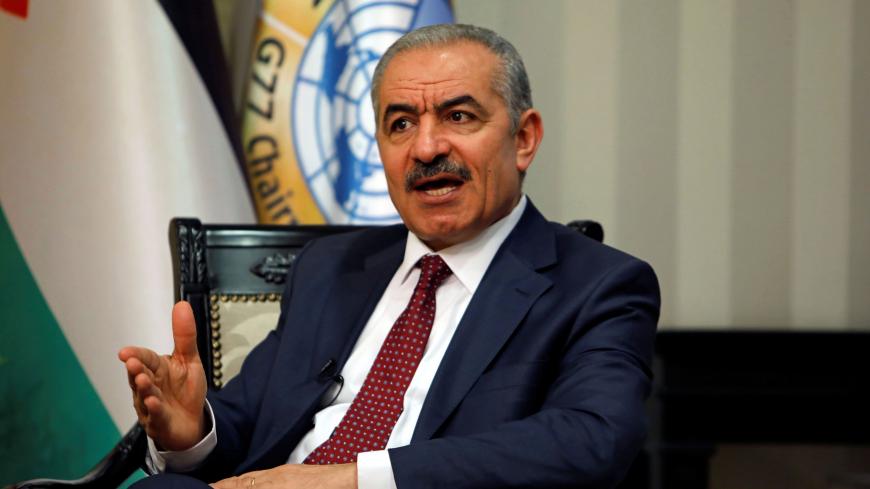 Palestinian Prime Minister Mohammad Shtayyeh gestures during an interview with Reuters in his office in Ramallah, in the Israeli-occupied West Bank, June 27, 2019. - REUTERS/Raneen Sawafta

GAZA CITY, Gaza Strip — Fatah leader and deputy in the Palestinian Legislative Council Hussam Khodr told Reef FM on Sept. 6 that the Palestinian Authority (PA) is facing a real crisis due to young Palestinians’ lack of trust in their government.

Khodr said the cause of the crisis is the PA’s refusal to address any challenge facing the Palestinian cause because it is prioritizing its personal interests over national ones. Khodr called on the PA to rebuild trust with the Palestinian people in the West Bank and establish direct ties with them.

Meanwhile, Fatah leaders in the Gaza Strip criticized on Sept. 3 how the PA is dealing with the enclave. They accused the Ramallah-based government of discriminating against Gaza when it comes to paying public employees’ salaries. This discrimination policy goes against the government’s previous announcement of uniting the salary disbursement scheme between both parts of the Palestinian territories.

Some Fatah members in Gaza resigned on Sept. 3, while others published aggressive statements and attacked the government headed by Mohammad Shtayyeh to protest the government’s failure to keep its promise that it would pay the salaries of employees in the West Bank and Gaza by the same percentage.

Barghouti denied these statements and refused to talk to Al-Monitor about the lack of trust between the PA and the people, saying, “I apologize, but I do not want to comment on the matter.”

Political analyst close to Fatah and professor of political science at An-Najah University in Nablus Omar Geara told Al-Monitor the whole Arab system has no popular base. The PA is no exception, as it does not rely on its people’s own capacities but on foreign aid from the United States and the European Union (EU), among others.

Geara said, “If the PA stops receiving aid it would automatically collapse because it does not have a popular base to keep it grounded [while] facing its enemies in the region.”

He noted that the PA alone cannot persist, and therefore it cannot stop security coordination with Israel — although it has repeatedly announced that it would in light of repeated Israeli violations of agreements signed with the PA. These empty promises have led the people to further lose trust in the PA, Geara said.

He added, “We do not want any further criticism of the PA — not because it is the ideal solution for the Palestinian cause, but because the alternative is worse.” Geara said Palestine will become like Libya, Somalia or Syria, plagued by civil war and conflict over power.

He denied any likelihood of the PA collapsing under public protests and indicated that individual armed operations in the West Bank do not target the PA; rather, they target Israel.

Geara said the Palestinian people want the PA to bring them their legitimate rights and limit relations with Israel. However, this is not possible for the Palestinian situation that is drowning in foreign aid, especially from the United States.

Political analyst Talal Okal told Al-Monitor the PA is facing trust issues with the Palestinian people. It has failed on all levels, as it did not protect Palestinian people’s rights from Israel’s theft of tax money, house demolitions and land confiscation, as well as settlers’ attacks. It has been incapable of solving the Palestinian rift and uniting people, not to mention its failure to solve the financial crisis and its weakness in managing its domestic and foreign situation. “The PA is well aware of the crisis, which some officials are talking about through direct or indirect statements,” Okal said.

Okal believes it is unlikely for Palestinians to topple the PA in Ramallah. Gazans tried to bring down Hamas’ rule in Gaza through the “We Want to Live” movement because Israel was imposing itself on all aspects of life. But the situation is different in the West Bank where the people believe in general that the PA is under US and Israeli pressure.

He noted that Palestinians are no longer betting on the PA to ensure their legitimate rights and the rising frequency of individual armed operations in the West Bank indicates that the Israeli-Palestinian conflict is gradually reaching all Palestinian territories, not just the 1967 occupied ones.

Palestinians have been doubting the PA’s intentions to end all agreements signed with Israel after Palestinian President Mahmoud Abbas announced July 25 the suspension of the agreements.

Okal asserted that these decisions reflect a political direction the situation will eventually take. Sooner or later, ties with Israel will be severed. He noted that Palestinians are challenging each other, but it is impossible to suspend agreements overnight. “Currently, no Palestinian faction has the trust of the majority of Palestinian people,” Okal said.

Professor of political science at An-Najah University Abdul Sattar Qassem told Al-Monitor the PA is facing trust issues because it did not ensure security and social, economic and job safety for the Palestinians. Besides, it clamped down on people with arrests and political pursuits when it had the chance. He said, “The PA’s actions are responsible for the lack of trust with its people.”

Palestinians believe the PA is working with Israel, Qassem said, asserting that Palestinians rejoiced when the PA took control in 1994. But time showed they would have been better off without it, even in the presence of Israel.

He noted, “People are afraid of toppling the PA because they are under occupation. They will refrain from this step not out of love for the PA, but out of concern over the implications of its collapse.”

The PA does not listen to criticism and refuses advice aimed at mending trust with Palestinians, Qassem said.