The prominent civil society figure marks 700 days in prison this week during his trial for allegedly plotting against the government, a charge worth life without possibility of parole. 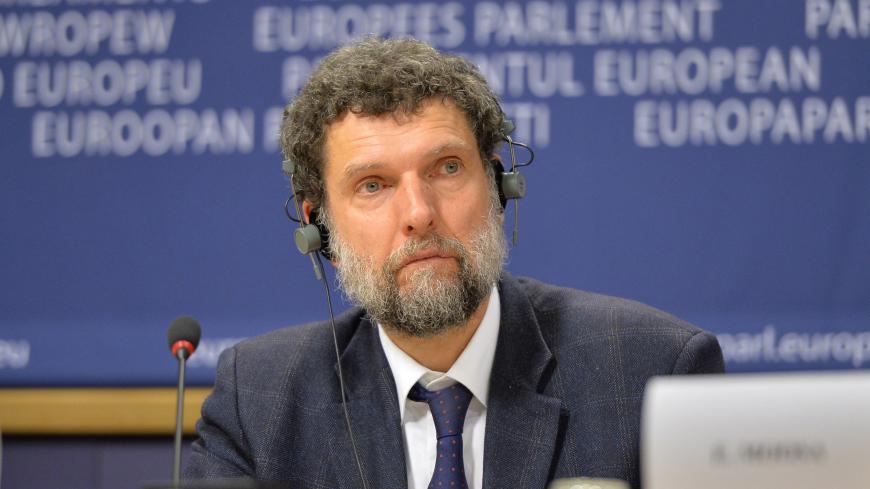 ISTANBUL — Human rights defenders on Monday called the continued detention of Osman Kavala, a philanthropist who promoted reconciliation with Armenians and Kurds in Turkey, a “political decision” that seeks to instill fear among Turkey's civil society.

On Tuesday, Kavala, who turns 62 this week, will have spent 700 days in prison on charges he organized mass protests to save an Istanbul park in 2013 in a secret effort to topple the government. He and 15 others return to court next week and, if convicted, face life imprisonment without the possibility of parole in a case decried by the European Union as undermining human rights.

President Recep Tayyip Erdogan has accused Kavala of “financing the terrorists in the Gezi events” and of receiving support from the “famous Hungarian Jew Soros,” referring to the American billionaire George Soros, who has become a bogeyman in Turkey and in far-right circles in the United States and Europe for his support for democratic causes.

“There is great political influence on the case,” Murat Celikkan of the Truth Justice Memory Center told a news conference. “It is a political decision that Kavala is being kept [in prison]. … His continued detention is unlawful.”

The Istanbul court has refused to release Kavala during his trial, citing the gravity of the charges and his flight risk, though others facing the same accusations in the case are free, as are an estimated 400,000 other people currently on trial in Turkey, Celikkan said.

The court’s presiding judge has been changed twice. The previous lead judge voted for Kavala’s release and the new head of the court has not heard the defendants’ testimony, effectively depriving them of their right to a fair trial, the activists told reporters.

Before his arrest, Kavala spent much of his personal fortune funding charitable causes that ranged from helping abused children and using art to bring polarized Turks and Kurds together to preserving Armenian historical sites, including the medieval city of Ani, inscribed on UNESCO’s World Heritage List. This month, he was awarded the European Heritage Prize by the European Association of Archaeologists for his work protecting minority cultural heritage.

His prolonged detention has created a rift between Turkey and the European Union, which called in July for Kavala’s immediate release, saying his prolonged detention violated his right to a natural judge. The European Court of Human Rights is expected to decide on Kavala’s petition claiming his lengthy pre-trial detention violated his civil liberties next month. Kavala had already spent some 16 months behind bars before an indictment was issued in February.

The ordeal of Kavala and the others — who include architects, lawyers, actors and a filmmaker — is part of a broader crackdown on Turkish civil society since Erdogan fought off a military coup attempt in 2016. Tens of thousands of people have been jailed and more than 1,000 nongovernmental organizations have been shuttered. A separate trial of 11 rights campaigners, including two Amnesty International workers, on terrorism charges also resumes next week.

The trial is “the most far-fetched and elaborate of all the conspiracy theories” that have targeted rights groups since the 2016 coup attempt, said Emma Sinclair-Webb of Human Rights Watch. “This is a fantastical trial reinventing these mass protests as something that a small group of people could have single-handedly organized.”

In 2013, a handful of architects and environmentalists sought to block plans to raze Gezi Park in central Istanbul, but the ensuing police crackdown galvanized hundreds of thousands out onto the streets of cities across Turkey in the largest anti-government demonstrations in a generation. At least nine people died in clashes with police.

Six years after those events, prosecutors have sought to recast the Gezi protests as a plot to topple Erdogan, who was prime minister at the time and a vocal proponent of knocking down the park to build a shopping mall whose architectural style would evoke the Ottoman barracks that once stood on the site. Before that time, part of the park, a potent symbol of the secular republic, was an Armenian cemetery.

Gezi has survived, though Erdogan occasionally revives the possibility of a construction project. The rest of the square has been transformed into a large concrete expanse. The Ataturk Cultural Center on the eastern edge has been demolished, and progress on its replacement has been slow. To the west, a soaring mosque nears completion, fulfilling a decades-old aspiration of Islamists who resented the presence of churches in the district once inhabited by non-Muslims.

The trial of Kavala and the others accused of orchestrating the protests resumes on Oct. 8, when three witnesses for the prosecution are due to testify. A verdict is not expected at this stage, but Kavala’s lawyers will petition again for his release. The court could also order the detention of the other defendants, the rights activists said.

The 657-page indictment is based largely on wiretapping, whose authorization was given by authorities who have since been accused of belonging to the religious movement of Fethullah Gulen, the US-based cleric accused of masterminding the 2016 military coup attempt, Celikkan said.

“There are a series of statements and assertions in the indictment. However, there’s no evidence to back those assertions. These assertions are baseless because the prosecutor doesn’t strive to show Osman Kavala” had a role bankrolling the protests, Sinclair-Webb said.

“The use of pre-trial detention in Turkey has certainly been turned into a form of summary punishment,” she added.

Targeting Kavala despite his wealth and prominence demonstrates to other rights campaigners that they too could be vulnerable, Celikkan said. “They want to show that they can get to anyone. He is a very good example. If they can keep him this unlawfully in prison, they can keep everyone in Turkey in prison. It’s fear politics,” he said.

Kavala has lost weight in prison but is in otherwise good health, said Sinan Gokcen of Civil Rights Defenders. The 20,000 or so inmates at the Silivri penitentiary, Europe’s biggest maximum-security jail, are worried about dozens of small earthquakes that have hit an area offshore this month, but their requests for access to yards adjoining their cells have been denied.