Israel's Central Election Committee has been meeting with Facebook and other social media executives to prepare as much as possible against last-minute cyber attacks and fake news as election day approaches. 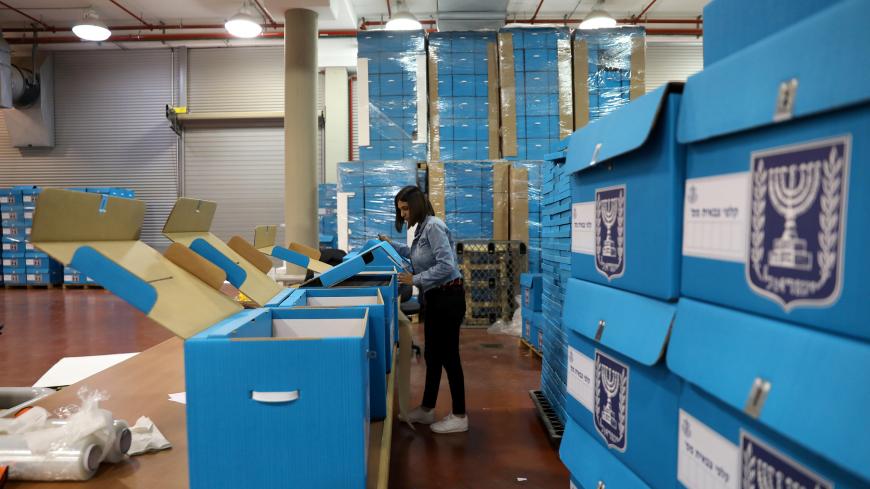 A woman sorts ballot boxes as part of preparations for the upcoming Israeli election during a briefing for members of the media at the Israel Central Election Committee Logistics Center, Shoham, March 6, 2019. - REUTERS/Ammar Awad

With days to go before the Sept. 17 elections, “cyber” has become the hottest word being bandied about in the final leg of the battle for votes and public opinion. In the good old days, candidates competed on the streets and on billboards and at election rallies. These days, cyberspace has become the main arena.

On Sept. 13, Avigdor Liberman, head of Yisrael Beitenu, sent an urgent letter to the director of the National Cyber Directorate demanding that the agency block cyber attacks expected against his party in the days leading up to the balloting and on election day itself. In fact, on Sept. 2, Yisrael Beitenu urged the Central Election Committee to immediately stop the “bot” activity it accused the Likud of directing at Liberman, attaching to its request a list of 51 allegedly fraudulent Facebook accounts used to disseminate fake news in Russian. The posts were aimed mostly against Liberman, whose party has a strong following among immigrants from the former Soviet Union, but also against the Blue and White, the Democratic Camp and Labor-Gesher.

Liberman has been waging a titanic battle against Prime Minister Benjamin Netanyahu and his Likud party for the immigrant vote. Netanyahu started the fight, fraught with raw emotion and clashing interests, when Liberman refused to join the government coalition he was trying to form following the April 2019 elections and appeared bent on destroying the prime minister’s political career. Netanyahu took his campaign to the bastion of Liberman supporters in a bid to lure away some of the electorate famously loyal to the Moldovan-born politician.

The more interesting and dangerous part of this campaign is being waged in the cyber realm. Netanyahu enjoys an almost unlimited budget, while Liberman is having to make do with far more modest sums derived from the far smaller number of votes his party received in April — 4% of the vote compared with Likud's 26.4%.

Facebook suspended Netanyahu’s chatbot campaign on Sept. 12 for 24 hours after a message sent to his supporters urged them to vote and to convince others to do so to prevent a left-wing government supported by “the Arabs who want to destroy us all — women, children and men.” Facebook, citing a hate speech violation of its rules, warned, “Should there be any additional violations, we will continue to take appropriate action.”

The Likud claimed that the message had been sent by an electronic bot on the initiative of a “junior staffer,” not at Netanyahu’s instigation. Netanyahu tried to disavow the troubling message, which constitutes incitement against the country’s 21% Arab minority. The incident recalled how after the 2015 elections, he had to apologize for an election day video in which he warned that “the Arabs are flocking to the polls in droves,” in an effort to encourage his supporters to vote.

With all due respect to the fake news that Israeli political rivals have been throwing at each other, the real concern is the far more extensive are consequential cyber attacks involving voter manipulation, like those by Cambridge Analytica, the British political consultancy firm shuttered last year after revelations about its role in the 2016 US presidential election.

Justice Hanan Melcer, chair of the Central Election Committee, is engaged in intense contacts with relevant agencies, among them Shin Bet and the National Cyber Directorate in a bid to ward off the potential threat. Since the directorate is under the prime minister’s authority, and he has a stake in the matter at hand, Melcer has set up several walls of protection through external, independent bodies. He is also engaging with Facebook, which owns WhatsApp, in an attempt to prevent the massive spread of fake news, edited clips and other manipulative information on election day.

Senior Facebook executives recently arrived in Israel, traveling secretly by private plane, for talks with Melcer about ways to block or mitigate attempts to manipulate the election outcome. Following such attempts in campaigns in the United Kingdom (including the Brexit vote), the United States, India and elsewhere, the eyes of the world are now on Israel. Facebook has come to realize how vital it is to prevent cyber attempts to influence the democratic process.

According to information reaching Israeli officials, Ukrainian hackers have been in touch with political elements in Israel looking to send a huge amount of WhatsApp and text messages to targeted audiences in the lead up to the elections and on election day. WhatsApp currently limits the number of messages a single user can send as well as the number of participants in a chat group for exactly that reason. After the exposure of cyber bullies and hackers attempting to interfere with elections, it was decided to limit the use of WhatsApp for affecting public awareness and potential voters.

Hackers from the depths of the darknet have succeeded in creating tools to bypass the security structures imposed by social networks and to send out millions of messages and clips by taking over chats and creating the illusion that the messages actually originate from the chats. This tactic creates a high degree of trust in a message's credibility and can boost its audience.

The Central Election Committee’s current top concern is that a party or candidate will get its hands on such capabilities and flood Israel with huge amounts of targeted, sophisticated fake news in the final 48 hours of the campaign, making effective countermeasures difficult. To neutralize the threat, unprecedented measures have been adopted and firewalls never before seen have been erected. Will they work? We will find out the day after the election, if ever.

The capabilities developed in the cyber world in recent years enable anyone willing to take the risk and to invest the time to create fake news in unprecedented quantities and of credible quality. For example, Netanyahu’s people have even suggested that a Sept. 12 report by Politico about Israel allegedly spying on President Donald Trump and his aides was fake news from the bowels of the darknet and cyber realms. Senior officials in Jerusalem offered up sweeping denials that the evidence and the source of the story might have been staged or created using cyber means until they evolved into a bona fide news report.