Israeli experts warn against foreign manipulation on social networks ahead of the elections, but also against lack of regulation in the war against cyber-attacks. 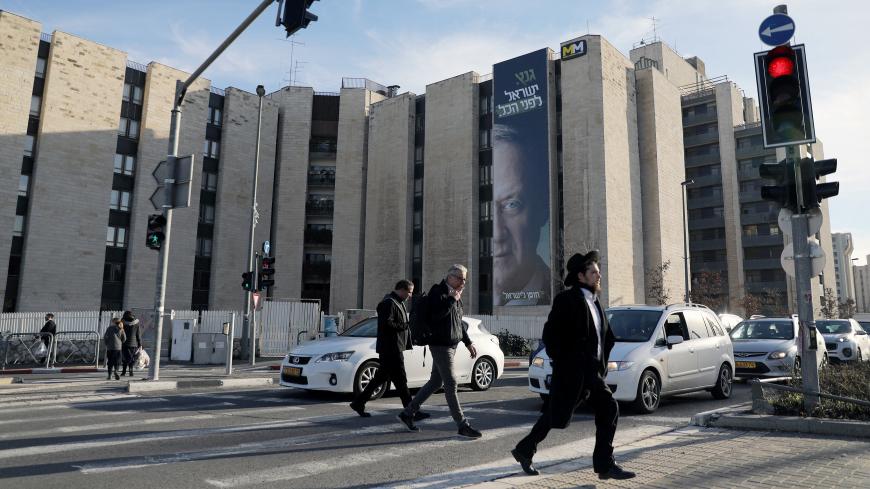 People walk past a campaign poster of Benny Gantz, a former Israeli armed forces chief and the head of a new political party, Israel Resilience, in Jerusalem, Jan. 29, 2019 - REUTERS/Ammar Awad

In June 2017, the Knesset Science and Technology Committee devoted a hearing to the cyber threat against Israel’s elections. Experts assured lawmakers that ballots are not under threat because the Central Elections Committee has an independent, closed-circuit system that cannot be hacked. “We decided not to go over to computerized voting, mostly because of what happened in the US presidential election,” an Israeli source close to the elections committee told Al-Monitor. “We would rather count the votes [by hand] at a slower pace, and ascertain that there is no possible infiltration of a computerized system by external elements.”

Nonetheless, the Jan. 7 warning by Shin Bet security agency chief Nadav Argaman continues to resonate. He said he was certain a foreign state would “intervene in the upcoming elections, and I know what I’m talking about.” The head of the Central Elections Committee, Supreme Court Justice Hanan Melcer, recently echoed Argaman’s concerns about the April 9 elections. Melcer has been troubled by this issue since assuming his position almost two years, meeting extensively with cyber and social media experts in a bid to prevent foreign cyber influence on the elections.

In a Jan. 29 keynote address to the Cybertech Conference 2019 in Tel Aviv, former Labor Knesset member and respected tech tycoon Erel Margalit issued a pointed warning. “A prime minister under criminal investigation cannot be given sole responsibility to oversee the integrity of the general election,” Margalit said. He was referring to last year’s decision by Prime Minister Benjamin Netanyahu to transfer responsibility for information and data security from the Shin Bet to the National Cyber Directorate, which is under his control, despite strong opposition by the Shin Bet and other Israeli security agencies. The Cyber Directorate has sweeping powers but is not currently subject to regulation. “The fact that a Netanyahu appointee heads this powerful body in an era of external cyber influence and meddling should trouble every Israeli,” Margalit told Al-Monitor.

Asked whether he was concerned that the Cyber Directorate would help Netanyahu skew the elections, Margalit responded firmly in the negative. “Of course not. The directorate is headed by a worthy, honest person. My concern is that it will not be motivated to combat foreign cyber meddling by nations or other bodies seeking to influence the elections because of some form of implicit direction from the top. This must be neutralized.”

Margalit believes Israel needs legislation to regulate the cybersecurity field, just as it enacted a law overseeing the activity of the Shin Bet at the time. The current state of affairs “is untenable. The prime minister was quick to issue a temporary order [on transferring responsibility to the Cyber Directorate] and there’s no legislation on this issue. There is no regulation and the Cyber Directorate can operate unfettered without requiring regulatory authorization or oversight.”

Col. (res.) Gabi Siboni, head of the cybersecurity program at the Institute for National Security Studies, told Al-Monitor, “Israel is secured on a very high level against classic cyber threats.” Classic threats are attempts by a foreign state or agency to meddle in computerized election systems. “The additional threat, of manipulating people’s votes, is more challenging,” Siboni added. “This can be carried out by bot accounts and networks, creating manipulation and disinformation, the way it was done in the US.” In this sense, according to Siboni, Israel is vulnerable.

A subcommittee of the Knesset’s Foreign Affairs and Defense Committee, meeting behind closed doors, recently discussed the possibility of establishing a special agency under the Central Elections Committee tasked with identifying foreign manipulation and information fraud directed at Israel during election campaigns. The idea was rejected. “The most significant and important challenge is knowing how to identify those trying to influence you from the outside,” said Siboni. “The minute you know who operates what and where, you can thwart such attempts and defend yourself; you have an array of defensive tools, but it is not effective if you have not identified such activity and its threat.”

There is no agency currently tasked with this issue. Justice Melcer met in October 2018 with senior officials at Facebook Israel in a bid to cooperate ahead of the elections. Melcer is taking other measures, among them retaining the services of Buky Carmeli, the former head of the National Cyber Security Authority, to help the Central Elections Committee. In addition to Carmeli, Melcer is getting help from the Shin Bet and the National Cyber Directorate. He hopes that by using the tools and protective measures of a variety of separate agencies, he can foil attempts to manipulate the outcome of the elections.

The Central Elections Committee is preparing for three main scenarios. The first two have to do with external meddling in the campaign, with the immediate suspects being Russia and Iran. The Russians have a proven record of similar activity in the United States and Europe. “They like meddling for the sake of meddling,” a senior Israeli source in the cyber field told Al-Monitor. “It is unclear whether they have a certain agenda, but they will always be there in an effort to influence or create chaos.” Iran has a clear motivation to interfere in the Israeli elections. “Here too, the foremost goal is to create chaos,” said the source.

Israeli authorities are also concerned about possible attempts to influence the elections from within, using fake bot accounts on behalf of one of the candidates. “When dealing with internal activity, the challenge is even greater,” said the cybersecurity source. “Candidates can get foreign elements to operate on their behalf from abroad and we will be hard pressed to identify them in real time.”

Supporters of Netanyahu have been far more active in this field than activists for other candidates. As previously reported here, several bot accounts operating on Netanyahu’s behalf were recently exposed. It is unclear who ran or funded the activity. Netanyahu is a master manipulator and knows how to leverage influence in his favor by using everything going around the internet. When Facebook announced on Jan. 31 that it had foiled an Iranian attempt to influence the Israeli elections, media supportive of Netanyahu were quick to come out with a fake headline saying, “Iranian propaganda attempt to unseat Netanyahu thwarted.” The Facebook announcement did not mention Netanyahu, but this did not stop his people from pushing this fabricated headline onto all available platforms. The public does not know the difference, does not read the small print, but gets the impression that the Iranians do not want Netanyahu. If the Iranians do not want him, the Israelis will vote for him. That is how it works, and this is probably how it will keep working over the next two months.