Ahead of the Sept. 17 elections, Israeli Prime Minister Benjamin Netanyahu is terrified that US President Donald Trump will crush his anti-Iran campaign by meeting with Iranian President Hassan Rouhani. 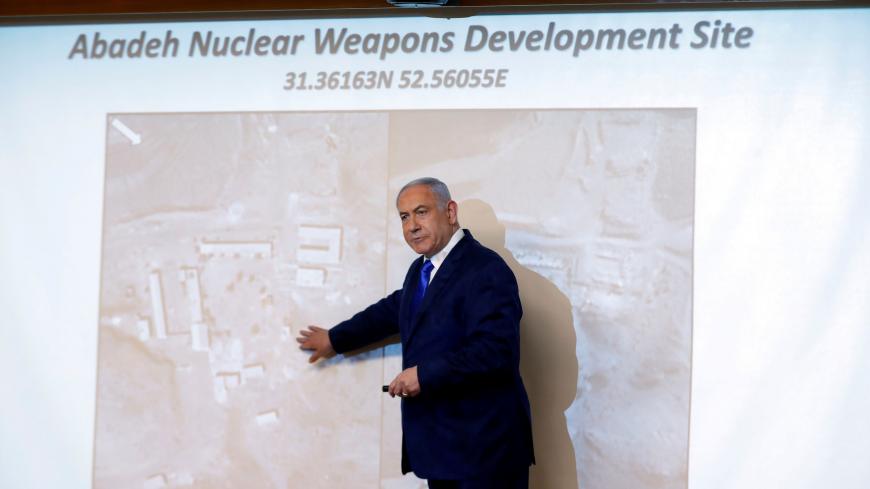 The closer Israel gets to the most fateful elections of its history, the faster the pace of security-diplomatic developments, begging the question of what will come first: elections or confrontation. A new government or war?

Prime Minister Benjamin Netanyahu returned on Sept. 9 to his favorite soapbox: Iran’s nuclear project. He sought to reenact his wildly successful 2018 unveiling of Iranian nuclear archives spirited by Israeli agents out of Tehran. This time, in a hastily called press conference, Netanyahu’s success was more limited. He claimed that inspectors of the International Atomic Energy Agency (IAEA) had found traces of uranium at the site he had pointed to during his UN General Assembly speech last year, and revealed the existence of a previously unknown site at which he claimed Iran had developed nuclear weapons. Netanyahu’s claim lacked detail: Iran shut down the second site in Abadah in July 2019 and it is unclear when any activity took place there. Nonetheless, the Israeli claim suggests Iran has violated its commitments under the Nuclear Non-Proliferation Treaty.

Netanyahu is in the midst of a perfect storm. All his nightmares are converging: His toughest, most fateful election campaign has entered its final leg. The confrontation between Israel and Iran over the Iranian entrenchment in Syria is escalating even as the US administration's commitment to Netanyahu’s anti-Iranian campaign appears to be weakening. Netanyahu is fighting on these fronts at the same time, against great odds.

The timing of Netanyahu’s news conference was hardly coincidental. Two hours earlier, his drive to place hidden cameras at Israeli polling stations collapsed when a Knesset committee sank his proposed legislation on the issue. Then a news conference was convened in Vienna by IAEA Acting Director General Cornel Feruta, who had just returned from Tehran. Netanyahu set himself two goals: To create an Iran-centric, security-focused agenda ahead of the Sept. 17 vote and fight what he regards as the IAEA’s conciliatory attitude toward Iran. However, Netanyahu received a crushing blow two hours after his news conference from the least likely direction: his closest ally President Donald Trump, the gift that never stops giving.

“It could happen,” the president told reporters in response to a question about whether he would be willing to meet with Iranian President Hassan Rouhani. “No problem with me.”

Previous suggestions that Trump would lose interest in pressuring Iran, as was the case with North Korea, are quickly materializing and could leave Netanyahu to face Iran on his own. “Now, imagine what Netanyahu would have done at that moment if President Barack Obama had expressed an interest in meeting Iranian President Hassan Rouhani,” a senior Likud source told Al-Monitor on condition of anonymity.

That, however, is not all. The night before Netanyahu’s revelations, shortly after midnight, unidentified aircraft struck a major site used by Iranian-directed Shiite militias on the Syrian side of the Iraqi border at the al-Bukamal crossing. The large compound was built last year to house Shiite combatants on their way west as well as the many arms and munitions with which Iran is trying to supply Hezbollah. The compound is the bridgehead of the land corridor Iran has paved from Tehran through Damascus to Beirut. The attack was attributed to Israel, of course, which has not commented. Some 18 Shiite fighters were reportedly killed and much of the compound was wiped off the face of the earth.

Such attacks, whether identified or anonymous, have occurred many times in recent months. What was different this time was an immediate Iranian response. Four hours after the bombing, in the dawn of Sept. 9, a unit of Shiite fighters left the Damascus suburbs and launched several Grad rockets toward the Israeli-controlled Golan Heights. It was apparently the same unit that was attacked some two weeks ago when it attempted a drone terror attack on Israel. These rockets landed on the Syrian side of the Golan and Israel did not even have to use its anti-missile interception system.

“The story here is not the quality of the response but its speed,” a senior Israeli defense source told Al-Monitor on condition of anonymity. “Gen. Qasem Soleimani was signaling that the rules of the game have changed and that Iran would respond immediately to any Israeli attack.” Israel is not taking the event lightly and knows that the commander of the Quds Force is far from conceding the ideological struggle he is waging against Israel and its military. “It is a matter of Messianic faith,” a former senior intelligence official told Al-Monitor on condition of anonymity. “The harder he is hit, the more he will hit back. He does not show any signs of giving up.”

However, with all due respect to Israel’s continued wrestling with Hezbollah and other Iranian-allied Shiite militias, Netanyahu’s real headache is developing in the White House. At this point, it can be described as a migraine. Netanyahu’s strongest ace is the firebrand serving for the past two and a half years as the president of the United States. The giant billboards the Likud has placed ahead of the elections at major intersections show Netanyahu and Trump shaking hands under the slogan, “A Different League.” Now Trump appears to have stopped playing ball at the very worst time for Netanyahu. His desire to meet with Iran’s Rouhani is perceived in Jerusalem as nothing short of treason. Netanyahu would rather Trump divide Jerusalem than meet with the Iranian president.

I presume Israeli Ambassador Ron Dermer is in for some heavy lifting in the coming days. Christian and evangelical leaders can also expect urgent phone calls. Netanyahu is in battle of his life, and he will fight for Trump’s backing with all his might.