The Joint List decided not to immediately recommend Benny Gantz for premiership so that he does not form a unity party with the Likud and leave the Joint List out. 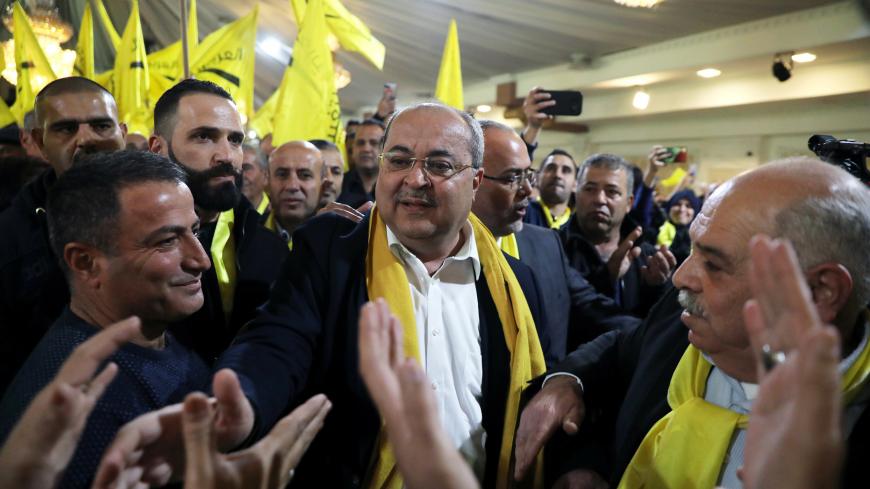 The main reason for the dramatic increase in the number of Arab voters in the Sept. 17 election was the desire of Israeli Arab voters to take revenge on Prime Minister Benjamin Netanyahu at the polls for his incitement against them. The leaders of the Joint List — a unified slate of predominantly Arab parties — even say openly that the Likud and the prime minister’s incitement campaign and the attempt to depict them as election stealers moved voters to flock to the polls. “Listen Abu Yair (meaning Netanyahu), incitement has a price,” tweeted Joint List Chairman and Knesset member Ayman Odeh on the morning of Sept. 18. In another tweet the next day, Odeh reveled in the Joint List’s ability to determine who would be charged with forming the next government. “For your information, the balance of a scale in Arabic is bidt al-kaban,” he wrote.

Seemingly, it’s quite logical that the Joint List would recommend to Israel’s President Reuven Rivlin to charge Blue and White party leader Benny Gantz with forming the government. But when other political calculations are added to the equation, it’s not clear that this will happen. Recommending Gantz, that is, realizing the will of the Israeli Arab voters to take revenge at Netanyahu for incitement against the Arab public, has a political price for the Joint List. Thus, it intends not to recommend anyone and will choose to wait for the second round, with the assumption that the initial person recommended would fail in the task of forming a government.

The first reason for not recommending anyone is Balad, one of the parties making up the Joint List. Balad opposes recommending “the generals’ party” — Blue and White. The Blue and White party includes three former Israel Defense Forces (IDF) generals. This hurdle could perhaps be overcome since Balad is only a quarter of the whole list, but there’s another, tactical, reason. A senior source in the Joint List explained in a conversation with Al-Monitor on condition of anonymity: “If we recommend now and the president indeed charges Gantz with forming the next government, he would form a unity government with [Yisrael Beitenu leader Avigdor] Liberman and the Likud. In such a case, none of the demands to benefit the Arab public would be implemented.”

After the election, Gantz spoke on the phone with Odeh and Arab Knesset member Ahmad Tibi. Blue and White senior Yair Lapid also contacted them and tried to understand “if we can depend on them.” He didn’t get an explicit promise, and it was determined that the leaders of the Joint List would meet with the leaders of Blue and White in the coming days. At the expected meeting, the Joint List leaders would present their demands to Blue and White before they reach a decision to recommend Gantz to the president.

In any case, it won’t happen in the first round, in coordination with Blue and White. The assessment is that Rivlin would charge Netanyahu with forming a government first since Gantz would have fewer parties recommending him without the support of the Joint List. But with the results of the election — 55 mandates for the far-right ultra-Orthodox bloc — Netanyahu won’t be able to form a government. This time it would be hard for him to reprise his trick from April’s election and disband the Knesset. This time he won’t have a majority to do so. Liberman’s Yisrael Beitenu and the Joint List, who voted to disband the 21st Knesset in April, won’t do so again. Then Odeh and his colleagues in the Joint List would express support for Gantz for prime minister — not for free, of course. It will have a price.

The Joint List’s demands don’t have to do with ministerial roles in a Gantz government. Its members understand that Gantz would find it difficult to form a government in which Liberman and Arab Knesset members sit together. It’s an illogical scenario, and it’s enough to recall Liberman’s inciting statements against them as a “fifth column” or “terrorists.” Support from outside the government is a much more reasonable scenario.

The list of demands was formulated even before the election results were in and the Joint List’s impressive achievement — between 12 and 13 Knesset seats — was registered, which positions it as an additional deciding force alongside the big rival, Liberman. Knesset member Tibi published the “list of demands” in the Yedioth Ahronoth newspaper on the eve of the election, which the heads of the four parties making up the Joint List had agreed on in principle.

At the top of the demands is restarting the diplomatic process with the Palestinians. We should note the delicate phrasing of the demand, which is meant to make it easier for Gantz and those Blue and White members who are more affiliated with the right to accept. It doesn’t say “creating a Palestinian state” and presents no outline for an arrangement; rather, it presents a vague demand to “establish a diplomatic process that would lead to the realization of the vision of two states on the basis of the 67 lines.” It’s likely that Gantz, Lapid and Moshe Ya’alon could accept the word “vision.”

Another demand touches on roles in the Knesset: appointing representatives of the Joint List to head the Finance and Interior committees. The goal is clear: the Finance Committee in order to promote the allocation of resources to improve the situation of Arab towns, and the Interior Committee in order to move the Israeli police force to fight crime in the Arab sector. Other key demands include building a new Arab city, establishing an Arab university, building a hospital in a large Arab city, and canceling the nationality law and the law on preference for hiring army veterans in the public sector.

This move by the Joint List carries a risk. Its voters, who shook off their apathy and didn’t boycott the election, expect to see practical results of their votes — that is, the ouster of Netanyahu and replacement of his rule. Sitting on the fence in the first stage as Rivlin charges Netanyahu with forming a government could foster a loss of faith in the political system and Arab citizens’ representatives in the Knesset, who once again didn’t fulfill their responsibility toward them, as far as they are concerned.

And what would happen if Netanyahu somehow manages, with the help of some defectors or with Liberman, to form a narrow and extreme right-wing government? “It can’t happen,” said the senior source in the Joint List. The source added, “There’s nowhere for Netanyahu to find the six missing mandates he needs to create a right-wing government.”

In the coming days, Gantz and Lapid — who are supposed to share the prime minister role in a rotation — will hear from Joint List representatives what kind of arduous road they’re preparing for in order to receive its support. It could be considered a brilliant move on the part of the Arab Knesset members, but it could also leave them with nothing. Gantz and his people are already conducting preliminary contacts with the ultra-Orthodox parties Yahadut HaTorah and Shas, which probably understand that the days of Netanyahu’s rule are over and — if they don’t quickly change sides — they’ll be left out of the coalition.