Some Iraq journalists are forming a list that includes all officials who attack them to prepare the ground for legal action against them. 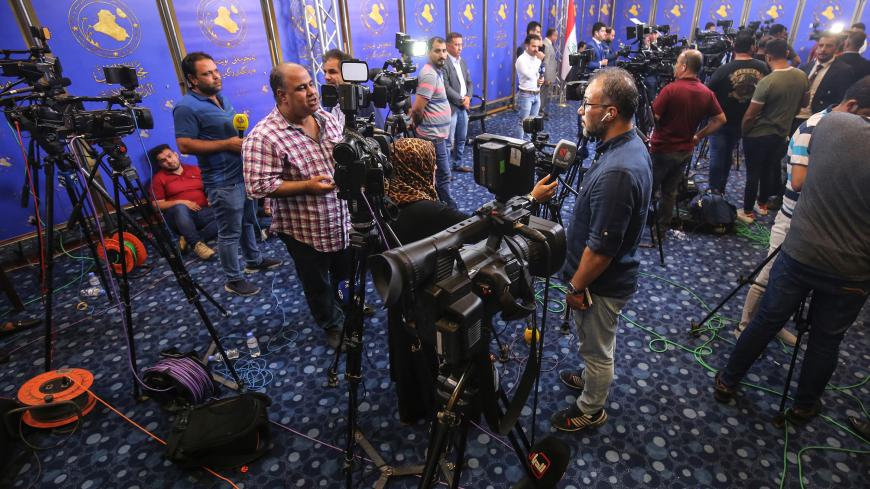 Some Iraqi journalists are attempting to limit repeated attacks against them in peaceful and legal ways in a bid to provide a safer environment for the free press in Iraq.

The Journalistic Freedom Observatory (JFO), one of the most prominent organizations working to defend press freedom in Iraq, announced Aug. 22 that it prepared a "blacklist of Iraqi politicians, government officials and parliamentarians who assault or attack journalists themselves or via their security teams."

This is a first-of-its-kind move by the local Iraqi organization, which has worked for 16 years to defend the rights of journalists through media pressure on authorities as well as armed and religious groups who assault Iraqi journalists.

JFO head Ziad al-Ojeili told Al-Monitor, “After a discussion with a group of journalists, we decided that statements of condemnation of censure are not enough to deter officials who are being scornful in dealing with journalists and media in Iraq. A blacklist of the names of some influential figures could be the solution we need to stop aggression against journalists.”

The JFO will also file lawsuits in Iraqi courts against those who are blacklisted; it will send reports to UN special committees and galvanize support from international organizations to pressure European governments, the United States and the UK to stop hosting blacklisted Iraqi officials at international conferences.

The journalists who devised the idea of a blacklist are attempting to cooperate with other local journalists and media outlets to prevent the hosting and interviews of leaders or members of armed factions who commit violations against reporters.

He believes such measures would prevent any “insult or threat” against any journalists. Ojeili added that several journalists and law experts have been reviewing the names of more than 30 figures accused of making death threats against Iraqi journalists in attempts to force them out of the country. This is not to mention the armed attacks on some media outlets.

The list will not be limited to politicians and government personnel only; it will also include six armed factions close to the Iraqi government that have attacked and abused journalists and reporters.

More than 460 journalists have been killed since 2003, according to Iraqi Journalists Syndicate President Moayyad al-Lami.

According to Reporters Without Borders (RSF), Iraq is still a dangerous place for reporters.

“Journalists in Iraq are victims of armed attacks, arrests and intimidation by militias close to the regime and regular forces. The killing of reporters remains unpunished, and investigations are leading nowhere, according to the victims’ families,” RSF said.

But there is concern that such lists could increase violations and attacks on journalists since the majority of politicians and armed groups do not fear media reactions.

“Most of the politicians in Iraq deal with journalists as foes or friends and act with them accordingly when they make statements or even laws,” Iraqi journalist Soaded al-Salihi told Al-Monitor.

There were 246 violations against journalists in 2018 in the Iraqi Kurdistan Region alone. Journalists were arrested, apprehended, brought to court, beaten, banned from covering news and attacked while on duty.

Iraqi journalist Wissam al-Mulla told Al-Monitor, “Iraqi journalists have suffered over the past years from attacks committed by Iraqi politicians and their bodyguards who continue to walk the streets with impunity. This is very dangerous, and we believe this step would stop these attacks from happening again.”

“A few weeks ago, former Minister of Transport and current parliament member Kazem al-Hamami attacked two journalists in the Iraqi parliament without being punished or even condemned by parliament itself,” Mulla said.

According to RSF, Iraq ranks 156 out of 180 worldwide in terms of press freedom. This is because of the frequent attacks on journalists despite the great space they have for expressing their opinions, but at the expense of their safety — especially when their reporting touched on religious issues, financing of political parties and wasted public monies.

Iraq needs laws and regulations regarding access to information as well as legislation that protects journalists from attacks and holds accountable the aggressors, as mentioned by UNESCO.

The JFO blacklist is a step forward on this road, as those aggressors will be mentioned by name — a first in Iraq and maybe in the Arab world.