In their fight against a Saddam-era union law, Iraq’s journalists show their new divisions, which demonstrate political differences rather than sectarian loyalties, writes Mushreq Abbas. 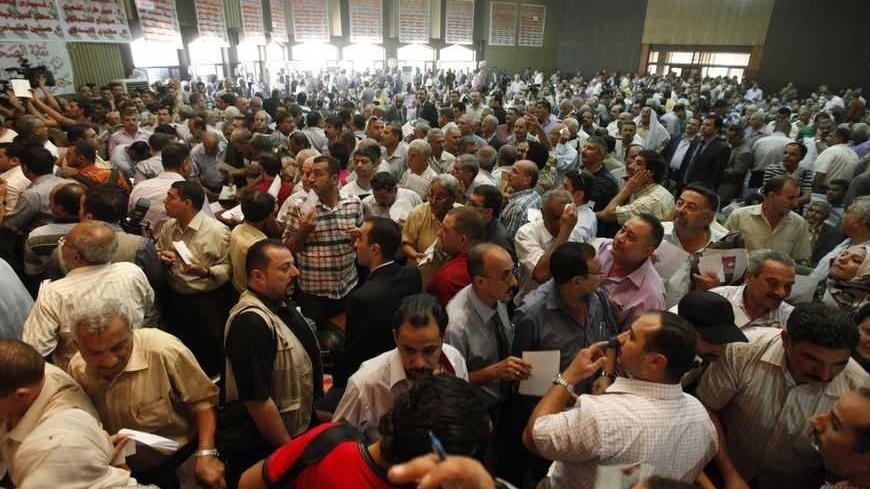 Iraqis adapt well to their political, ethnic and sectarian rifts. Journalists, on the other hand, have given rise to another kind of division. Hundreds of Iraqi journalists deny the legitimacy of their syndicate and have accused it of adopting the mechanisms of the former regime and consequently constraining the abilities of journalists in favor of the government. They have gone to even greater lengths — forming an alternative syndicate.

The Iraqi law that regulates the framework of syndicates dates back to the 1970s, prohibiting the formation of more than one syndicate per profession. In this regard, the parliament is striving to amend the law, yet faces obstacles from the parliamentary Culture Committee.

The Iraqi Journalists Syndicate was established in the middle of the last century, however Moayad al-Lami, president of the syndicate, objected to the formation of a new syndicate under the name of the National Syndicate for Journalists. Furthermore, Lami questions the legality of the new syndicate, which violates the existing law, and accuses the journalists who formed it of creating divisions in favor of “foreign agendas.”

In response, the president of the National Syndicate, Adnan Hussein, stresses that the absence of a law does not imply that the law passed during the reign of the former totalitarian regime is still in force.

“The current government has used this loophole to control the syndicate. Dolling out residential lands and money in the form of governmental subsidies to journalists has become a gateway to corrupt journalism and restores the mechanisms of totalitarian regimes in dealing with the press,” declared Hussein.

Moreover, Mazen al-Zaidi, a newly elected member of the new syndicate, justifies the new division by reiterating that the performance and representation of the old syndicate is questionable. According to Zaidi, granting membership to more than 10,000 individuals is highly suspicious, particularly given the fact that many of them have nothing to do with journalism. They are simply used by Lami as an electoral base to ensure re-election.

In this context, many Iraqi writers and journalists are voicing their complaints about granting membership to workers, soldiers and state-employees without verifying that they are actually practicing the profession.

According to Ziad al-Ujaili, head of the Journalistic Freedoms Observatory in Iraq, the power of the Iraqi Journalists Syndicate does not emanate from defending the rights of journalists, but from receiving money from the government and disbursing it to members. “This sort of behavior damages the dignity of independent journalists,” Ujaili declared.

Speaking of the legality of forming a new syndicate, Ujaili confirms that the political parties have been functioning since 2003 without any regulatory law. They have, nonetheless, assumed seats of power, led the country, and participated in elections. “Why are politicians allowed to do so, while journalists are not?” asked Ujaili.

Lami, however, denies all accusations, stressing that the journalists who formed the new syndicate are working under the auspices of political agendas, since they oppose the current government. They seek to defame the syndicate’s great history. Lami has called on journalists seeking reform to participate in syndicate elections and achieve their goals legitimately.

In reply, Sarmad al-Taki, a member of the new syndicate, said that “journalists have become a minority [in the syndicate], given the large number of fake members. Achieving reform from within the syndicate is impossible until these hundreds, possibly thousands, of false journalists are denied membership.”

Lami supports the law on protecting journalists that was endorsed a few months ago by the parliament. Yet, the law has been outright rejected by the new syndicate.

Head of the Press Freedom Advocacy Association in Iraq, Hatem Oudai, confirms that the law comprises ambiguous, general expressions that could be used to constrain the freedom of press. The law grants the government the right to try any journalist whose work threatens national security, without specifying the concerned practices. According to Oudai, this margin of loose interpretation is unacceptable.