The Iraqi Ministry of Defense has filed a lawsuit against the Kurdistan Regional Government, claiming that the latter has failed to return Saddam-era weapons and military equipment. 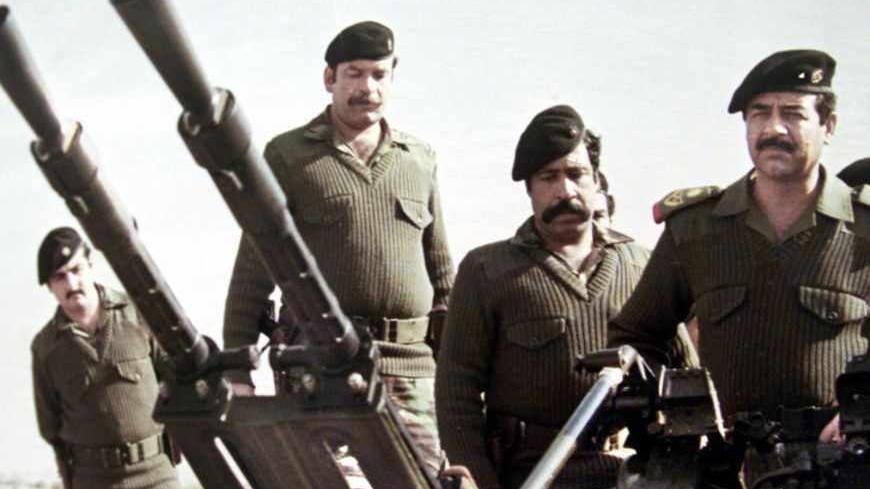 Saddam Hussein (R) stands with his guards behind him at an artillery piece during the 1980-1988 Iran-Iraq war in this undated file photo. - REUTERS

In a step that officials in the Iraqi Kurdistan Regional Government (KRG) did not foresee, the Iraqi Ministry of Defense filed a lawsuit, through the Karkh Court of First Instance, against KRG Prime Minister Nechirvan Barzani and Peshmerga Minister Jafar Mustafa, and called on them to appear before the courts. The lawsuit was filed on the grounds that the peshmerga were keeping large quantities of heavy weapons that they transferred to the region’s provinces after the fall of the former Iraqi regime in 2003.

The Peshmerga Ministry has admitted, more than once, that it possesses of light, medium and heavy weapons that it had obtained over two stages. The first stage took place after the 1991 uprising that broke out in Iraq and was referred to as the Shaaban Intifada among Iraqis, and as the National Uprising among Kurds. During this uprising, most Iraqi cities were liberated, but then the Iraqi regime managed to retighten its grip on all those regions, with the exception of the three Kurdish cities Erbil, Sulaimaniyah and Dahuk.

The second stage through which the Kurdish peshmerga obtained arms happened after the fall of the former Iraqi regime in 2003, following the US-led Iraq war in which Commonwealth and other countries participated.

The former Iraqi army’s 5th and 1st Legion forces, which were respectively in Mosul and Kirkuk at the time, left behind most of their weapons on April 9, 2003. Both legions possessed armored vehicles, tanks and even helicopters, which were completely plundered from the camps in both provinces a few weeks after the fall of Saddam.

As a first reaction to the lawsuit filed by the Iraqi Ministry of Defense, the government of the Iraqi Kurdistan Region, represented by Mustafa, refused to appear before court. A press statement published by the British daily Asharq Al-Awsat reported Mustafa as saying, “We received an official letter from Karkh Court in Baghdad regarding the federal Ministry of Defense’s lawsuit against me and against Barzani, under the accusation that we confiscated several tanks and anti-aircraft DShK cannons. We can assure you that once these plaintiffs themselves appear before court, we will too. Otherwise, we will not heed their demand because there are no legal grounds for this lawsuit, whose perpetrators have political agendas.”

Shawn Mohammed, an MP from the Kurdistan Alliance Bloc and a member of the Security and Defense Committee, confirmed that the peshmerga obtained old heavy and light weapons that were in the possession of the former Iraqi army.

“The Peshmerga obtained these weapons over two stages — the first following the 1991 uprising and the second following the fall of the former Iraqi regime in 2003,” he added.

At the same time, he confirmed that these weapons are very old and are referred to as “out of service” weaponry in military circles. Another category of weapons was called “scrap,” and these latter weapons were repaired by the peshmerga after the Iraqi Ministry of Defense stopped supplying them with weapons.

Mohammed indicated that the Iraqi Ministry of Defense should have asked neighboring and European countries that hold Iraqi weapons to return them to their rightful place.

He added, “There are over 123 (Iraqi) warplanes in Italy, and one Iraqi military ship on the Italian coast. They have been there since 1985; why don’t they ask for those to be returned?”

Iraq had sent several aircraft to Tunisia, Iran and Jordan before the 1991 Gulf War, to protect them from the raids carried out by the US-led International Coalition Forces that aimed to end Iraq’s invasion of Kuwait.

However, Iraq failed to retrieve its aircraft due to the international sanctions imposed by the UN.

Mohammed added that the Ministry of Defense could have asked the Peshmerga Ministry to hand over the weapons in return for providing armament, training and rehabilitation to the peshmerga and the Kurdish security organization.

He clarified, “They want their old weapons? Well, we want our share of weapons, which amount to 17% of the Iraqi Ministry of Defense’s weapons, because these weapons are rightfully ours. After all, the peshmerga protects around 20% of the Iraqi border.”

Article 117, Paragraph 5, of the Iraqi Constitution sets forth that, “the Regional Government shall be responsible for all the administrative requirements of the region, particularly the establishment and organization of the internal security forces for the region such as police, security forces and guards of the region.”

Mohammed dismissed any exacerbation of the situation between Baghdad and Erbil due to this lawsuit, especially after the two sides recently witnessed a clear improvement in relations embodied by the visit of Iraqi Prime Minister Nouri al-Maliki to Erbil, in response to Barzani’s visit to Baghdad a few months back.

On June 9, 2013, Erbil witnessed the visit of Maliki, who arrived with his ministers, and held a session in Erbil along with a one-on-one meeting with Iraqi Kurdistan Region President Massoud Barzani. It was then that the work of the seven committees debuted. The committees include: one for the conclusive revision of the federal budget, one for the revision of the oil and gas draft law, a joint security committee for disputed regions listed in Article 140, a joint committee to follow up on parliamentary work, a joint committee to follow up the work between Baghdad and Erbil, and a committee to oversee the border crossings and airports.