Iran-backed PMU factions are trying to form a PMU air force unit with Iranian support, but the top PMU leader says no. 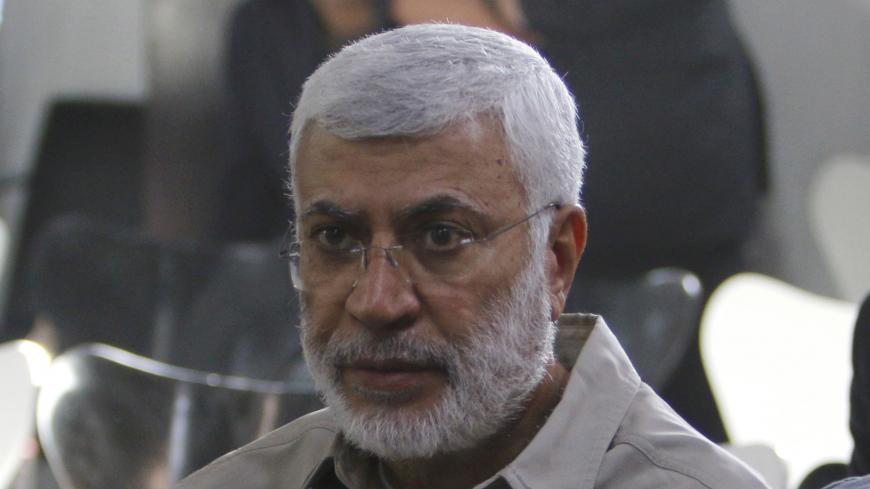 Abu Mahdi al-Muhandis, one of the leaders of the Popular Mobilization Units, attends the funeral of Ahmad Chalabi in Baghdad, Iraq, Nov. 3, 2015. Muhandis wants the PMU to form its own air force, with Iranian help. - REUTERS/Khalid al-Mousily

Iraqi media reported that Muhandis, accompanied by Qais al-Khazali, the leader of the Iran-backed militia Asa'ib Ahl al-Haq, went to Iranian capital of Tehran on Aug. 28 to ask for an air defense system, including surface-to-air missiles to shoot down drones flying over PMU headquarters.

Al-Monitor learned from a high-ranking source in the PMU that it is specifically seeking the Bavar-373, an Iranian long-range road-mobile surface-to-air missile system comparable to the Russian S-300 missile system.

Following the Muhandis order to form an air force unit, the media office of PMU leader Faleh al-Fayadh issued a statement Sept. 5 that denied that the PMU intends to form an air force. Fayadh had previously rejected Muhandis' statement accusing the United States of playing a role in the attacks on the PMU, saying what Muhandis said is his own opinion and does not represent the PMU position.

This indicates that Muhandis is working separately from the Iraqi state, trying to form and maintain a security force loyal to Iran, perhaps similar to the Islamic Revolutionary Guard Corps in Iran.

However, the aforementioned effort is not receiving support in Iraqi political and social spheres. As pro-Iran forces in Iraq move closer to Iran, they seem to become more isolated in Iraq.

Following the series of attacks against PMU bases and weapons warehouses in Iraq, Ammar al-Hakim, the head of the National Wisdom Movement who was a strategic friend to Iran until recently, criticized both Iran and Israel for exploiting Iraqi territory. Hakim said, “Iraqi land is not a warehouse for other countries' weapons and its skies should not be violated by foreigners' attacks.”

Sadrist movement leader Muqtada al-Sadr also criticized both Iran and Israel, asking the Iraqi government to not allow any countries, including Iran, to interfere in Iraqi matters.

Al-Monitor learned from a source in Prime Minister Adel Abdul Mahdi's office that the PMU statement rejecting Muhandis' announcement that the PMU is forming an air force came after Sadr contacted the prime minister and threatened to withdraw support from Mahdi's government if no any action took place against Muhandis' move.

Sadr also threatened in a tweet Sept. 5 that if the government does not take strict actions, he would withdraw his backing.

Moreover, there are rising demands in Iraq that the heads of PMU must be elected through the parliament, as the Iraqi Constitution calls for. Fayadh and Muhandis were appointed by Prime Minister Nouri al-Maliki in 2014 but no vote on them has taken place in parliament.

In such a political environment, it seems very difficult for the PMU to form an official air force. However, it is possible for Iran to provide some advanced air-defense system unofficially to its proxies in Iraq, as the Islamic Republic has done in Lebanon and other areas.

Iraq has become a battleground of sorts for Iran and the United States, as they wrestle each other through the use of allies and networks. A positive aspect in all this has been the development of a national Iraqi voice calling for independent Iraqi decision-making. This has prevented Mahdi and his government from bowing to Iran's wishes and following its orders.

Although it seems very unlikely that the prime minister's government will be able to bring the PMU fully under its control in the short term, pro-Iran PMU factions have already failed in attempts to impose their will on the government.

Iranian proxies even have failed to unite the PMU voice, as the majority of PMU factions remained silent about the attacks against the pro-Iranian PMU bases and weapon warehouses. They also have been silent about Iran-US tensions, showing little sympathy and sentiment for to Iran in its struggle with the United States.

In contrast, anti-Iran sentiment is growing in Iraq, not just among Iran’s enemies, but also its past allies such as Hakim and Sadr, who have been criticizing Iran publicly and demanding a national, independent Iraqi decision-making.

The aforementioned indicators show that Iranian policies in Iraq, despite short-term achievements, have failed to make Iraq a strategic ally of Iran.