Turkish President Recep Tayyip Erdogan claims a safe zone in northeast Syria could be used to resettle up to three million refugees currently in Turkey and Europe, but critics doubt his proposal is feasible. 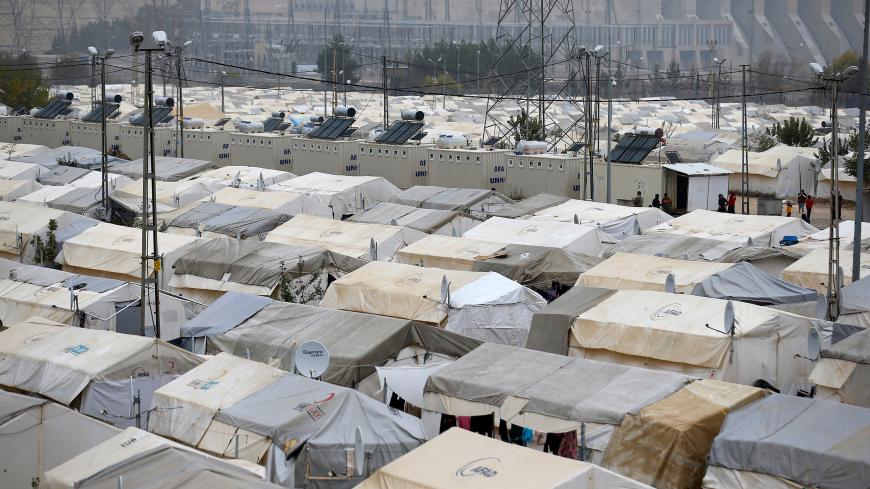 Having long pushed for the establishment a so-called safe zone in northeast Syria, Turkish President Recep Tayyip Erdogan said on Wednesday that the area could be used to resettle two to three million Syrian refugees currently living in Turkey and Europe. The proposal is the Turkish leader’s latest attempt to accelerate joint safe zone plans with the United States. He said that if they are delayed, Ankara would advance on its own terms in two weeks’ time.

“By making east of the Euphrates a safe place, and depending on the depth of this safe zone, we can resettle two to three million displaced Syrians currently living in our country and Europe," Erdogan told an audience of academics in Ankara on Wednesday.

“We want to see strong support from European countries, on both the issues of Idlib and the region east of the Euphrates,” he added. “We expect action.”

Turkey hosts more than 3.6 million Syrian refugees and leaders in Ankara have come under increasing pressure to manage the displaced population as anti-refugee rhetoric has risen sharply within the country. In recent weeks, Erdogan has emphasized his nation may not be able to host the refugee population within its borders unless it receives more financial aid from European Union nations and expedited US support in establishing a safe zone in Syria.

At the same time, Turkish leaders have expressed frustration regarding joint northeast Syria operations with US forces, which they accuse of foot-dragging in establishing a safe zone of yet-to-be-determined dimensions that would be free of Kurdish militants seen as a threat to Turkey’s security.

While joint US-Turkey patrols of the area have begun, Erdogan has continued to advocate for the safe zone following an Ankara summit on Syrian peace talks, exemplified today by his pitch that the area could provide a secure harbor to resettle Syrian refugees scattered throughout Europe. Yet the proposal has raised concerns over the feasibility of such an undertaking among those familiar with the area.

Marwan Hisham, a Syrian journalist and co-author of “Brothers of the Gun: a Memoir of the Syrian War,” chose to voluntarily return to his hometown, Raqqa, in August after living in Turkey for several years. On his way back, Hisham said he passed through Jarablus, a city under Turkish military control following the 2016 Euphrates Shield operation. He noted the city’s infrastructure was not prepared to host displaced populations

“To my surprise, I found that it was not in a better state than it had been the last time I was there, just before the Turkish intervention,” Hisham told Al-Monitor.

Hisham said the city ran largely on generators that filled the air with diesel exhaust, and that inhabitants received two to three hours of electricity a day from the Turkish grid. He also expressed doubt that the proposed safe zone would offer enough security for large-scale resettlement, as Syria remains volatile following eight years of war.

“Turkey has proven it cannot protect such an area from the Damascus government’s attacks, nor can it provide the basic conditions for decent life for such a large number of people,” Hisham told Al-Monitor.

Omar Kadkoy, also a Syrian refugee and a researcher at the Economic Policy Research Foundation of Turkey in Ankara, said resettlement targets for the safe zone had climbed steeply in recent weeks, up from an initial 700,000 a few weeks ago to three million following the Ankara summit.

Kadkoy noted the political and logistical aspects for establishing the safe zone could be addressed through diplomacy, but questioned whether refugees would be convinced to voluntarily return to northeast Syria, considering many did not originally live in that part of the country.

“When refugees or displaced people decide to return, the vast majority decide to return to their places of origin, and what we know about Syrians in Turkey is that almost 70% come from west of the Euphrates and Aleppo,” Kadkoy told Al-Monitor.

Regarding Erdogan’s proposal that the area may offer resettlement opportunities for refugees in Europe, Kadkoy said the majority of officials in countries like Germany, which hosts the largest Syrian population in the European Union, are not debating repatriation and are more focused on integration at the moment.

“This might resonate with the [Alternative for Germany],” Kadkoy said, referring to the far-right, anti-immigrant German political party. “If Turkey succeeds in establishing this zone, I think the AfD could jump at this opportunity. … But I don’t think, overall, the topic of Syrian repatriation is on the agenda of European Union member states.”

Next week, Erdogan is expected to discuss safe zone plans with US President Donald Trump. Both leaders have agreed the area would run 450 kilometers (280 miles) along the Turkish-Syrian border, between the Euphrates River and the Iraqi border, but the depth of the area remains to be finalized.

Ankara officials have long claimed the safe zone is a national security issue for Turkey, as it would create a demilitarized buffer zone, pushing Kurdish militants and heavy weaponry away from the border. During military campaigns to eradicate Islamic State militants in Syria, US forces armed and trained Kurdish groups linked to the Kurdistan Workers Party, which is designated a terrorist organization by both Ankara and Washington.

As armed Kurdish groups continue to operate in northeast Syria alongside an estimated 1,000-2,000 US forces, Hisham said Ankara officials could view resettling Syrian Arab refugees within the proposed safe zone as an additional security measure.

Erdogan “sees the refugees as a potential demographic wall against the Kurds,” Hisham told Al-Monitor. “Also, this would justify the refugee deportation policy his government is enforcing, thus killing two birds with one stone.”