Following an agreement to establish a "peace corridor" in northeast Syria, American and Turkish officials are creating a joint command center to work out details and oversight protocols. 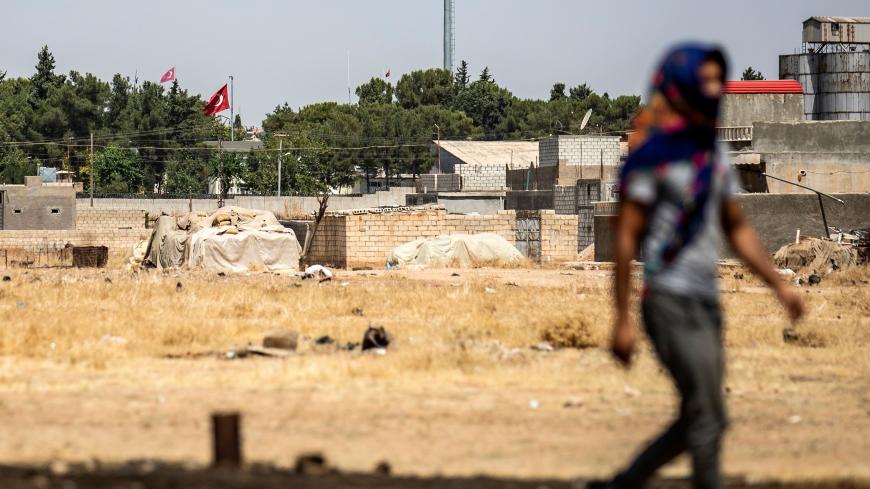 A Syrian Kurd walks during a protest and sit-in against Turkey, in the town of Ras al-Ain in Syria's Hasakeh province near the Turkish border, Aug. 9, 2019. - DELIL SOULEIMAN/AFP/Getty Images

A US delegation arrived in Turkey Monday to set up a joint operations center that will oversee the establishment of a so-called safe zone in Syria. The move follows a recent agreement between US and Turkish officials to address Ankara’s security concerns along its southern border.

Though details of the peace corridor’s size and management protocols remain undetermined, the command center is expected to serve as a conduit for negotiations shaping the future of a region that has long been a friction point in US-Turkish relations.

Deep disagreements remain over the role of Kurdish militants in the Syrian Democratic Forces with which the United States allied to eradicate Islamic State militants from northeast Syria. Turkey, a US NATO ally, sees elements of the SDF as an extension of the Kurdistan Workers Party, a Kurdish insurgent group designated as a terrorist organization by the United States and the European Union that has waged war in Turkey since the 1980s.

With such divisions unlikely to be surmounted in the near-to-medium term, analysts view the establishment of the joint operations center as a mechanism to buy time and stave off a possible third Turkish military incursion into Syria that Ankara officials have been increasingly promoting in recent weeks.

“The United States’ priority was to prevent Turkey from taking unilateral steps,” Washington-based journalist and Kurdish affairs analyst Mutlu Civiroglu told Al-Monitor, noting the parameters of the safe zone can have different interpretations.

While Washington may seek to replicate the joint patrol protocol established in the Manbij roadmap, Ankara might pursue a resolution closer to its operation in Afrin, where Kurdish militants along with an estimated 150,000 civilians withdrew from the area, allowing Syrian refugees from other regions to resettle there under the protection of Turkish security forces, Civiroglu said.

“SDF members and their supporters view Turkey’s potential operation as an attempt to prevent them from having a say in the future of Syria,” Civiroglu said, adding the displacement caused by the Afrin operation and Ankara’s strong opposition to a 2017 independence referendum in Iraqi Kurdistan were signs Turkish officials would again seek to obstruct Kurdish autonomy outside their nation’s borders.

“Turkey sees the Kurdish identity as a serious threat not only inside Turkey but also in Iraqi Kurdistan and nowadays in Syrian Kurdistan,” he said.

Still, US officials have recognized that Kurdish militants operating inside Syria remain a legitimate threat for Ankara and have sought to implement a sustainable buffer zone between the two hostile entities. Failure to do so could renew calls for a Turkish military incursion east of the Euphrates River, an option that remains on the table for Ankara.

“Turkey won't allow the US to stall the process for the operation east of the Euphrates like they did in Manbij,” Turkish Foreign Minister Mevlut Cavusoglu said during a recent speech in Antalya.

If the United States does not cooperate in meeting Ankara’s safe zone demands, which currently include a corridor 32 kilometers (20 miles) deep into Syrian territory, Turkish Defense Minister Hulusi Akar said Turkey could pursue its own solutions.

“Call it either a plan B or plan C. We will have activities of our own if other plans fail,” Akar said during a televised interview on Monday.

In an article for The National Interest, Gonul Tol, the director of the Middle East Institute’s Center for Turkish Studies, and Gen. Joseph Votel, former commander of the US Central Command, wrote the safe zone proposed by Ankara would likely displace “more than 90 percent of the Syrian Kurdish population, exacerbating what is already an extremely challenging humanitarian situation, and creating an environment for increased conflict that would require an extended deployment of military forces.”

According to Aaron Stein, director of the Middle East program at the Foreign Policy Research Institute, establishing an operable safe zone would require difficult compromises from leaders in both Ankara and northeast Syria that could make both sides more vulnerable.

“In order to actually implement this thing in ways that do not result in bloodshed, violence and the complete collapse of US-Turkish relations, you have to have a compromise that involves Turkey accepting the SDF as a quasi-legitimate actor,” Stein told Al-Monitor. “But that’s just never going to happen.”

Stein also noted the 900 to 2,000 US soldiers were currently stationed in northeast Syria and an outbreak of violence could threaten their safety. To appease Ankara’s demands, limited Turkish military operations may take place in the Syrian border towns of Tell Abyad and Ras al-Ain, but such incursions could still pose risks for US personnel on the ground.

“The ball is in [Turkish President Recep Tayyip] Erdogan’s court,” Stein told Al-Monitor. If a military incursion were to take place, “He would be accepting the political risks of accidentally killing an American are less than the potential benefit that would come after an invasion,” Stein added.

The preliminary proposal for a safe zone introduced by US officials includes SDF forces pulling back five kilometers (three miles) along the entire northeastern Syrian border. Heavy weapons would be moved an additional nine kilometers (six miles) away from the Turkish border, creating a corridor 14 kilometers (nine miles) deep. The zone would remain under American control, but Stein said the proposal would also include the dismantling of SDF fortifications in the area, which would require earthmoving equipment not currently at the disposal of US troops or the SDF.

Citing the matter as one of numerous complications that would be need to be addressed in joint operations center talks, Stein said Ankara appeared to have a clear advantage in negotiations moving forward.

“Geography matters and Turkey can put more hardware on that border than the US can raise its risk profile,” Stein said, referring to American deterrence patrols in the area. “It’s really up to Turkey. … You think things are bad with [Turkish-Congress relations] now, wait till Turkey rolls across the border.”