The commander of the Syrian Democratic Forces stated in an interview that a proposed safe zone between Turkey and Kurdish-controlled northeastern Syria must cover the full length of the border between them. 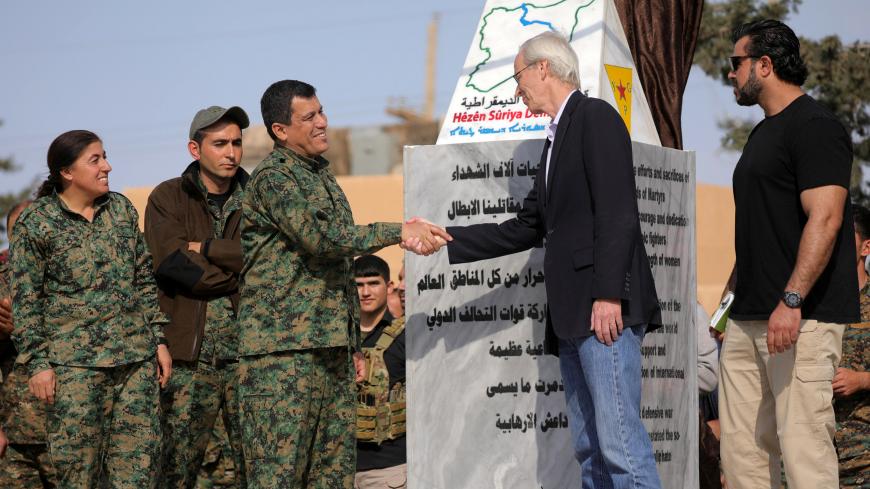 A proposed safe zone deal between Turkey, the United States and the Kurdish administration in northeastern Syria must run the full length of territory lying between the Euphrates River and the Tigris, the commander of the US-backed Syrian Democratic Forces asserted in an interview published today by the pro-SDF Hawar News Agency.

Striking a moderate tone on the US-led talks to establish a safe zone, Mazlum Kobane confirmed that no firm agreement on the precise nature and scope of the zone had been reached.

Kobane stressed that the SDF would not accept any plan that did not include the full stretch of the border separating the Kurdish-controlled northeast of Syria from Turkey. He did not elaborate.

But a senior SDF official speaking on condition of anonymity because of the delicate nature of the topic told Al-Monitor, “The reason the agreement needs to encompass the whole border is because otherwise Turkey will continue to threaten unilateral action against the territories that fall outside it. We have no reason to believe that Turkey’s fundamental hostility toward us has changed.”

The official noted, however, that the United States had stood firmly behind the Kurds and that this support had played a critical role in heading off a potential Turkish incursion.

A second SDF-affiliated official was even more upbeat. Speaking not for attribution, he said, “The United States is currently speaking to Ankara on behalf of the SDF, voicing Kurdish demands, and that’s actually quite amazing.”

Kobane confirmed in the interview that the United States was conveying Turkey's demands to the SDF and the SDF's demands back to Ankara.

The SDF-affiliated official continued, “Ankara looks set to accept a YPG presence in northeastern Syria in the long term. A modus vivendi seems within reach.” The YPG is the People’s Protection Units, the Syrian Kurdish militia that is the driving force behind the SDF. It's the target of Turkey’s ire because of its intimate ties with Kurdistan Workers Party (PKK). The PKK has been fighting the Turkish army for Kurdish self rule since 1984. Today marked the 35th anniversary of the beginning of its guerrilla campaign.

The official speculated that a thaw was made possible when a slew of officers in the Turkish military who purportedly advocated for intervention against the YPG in Syria and Cyprus in the Eastern Mediterranean were either forced into early retirement or passed over for promotion during the Supreme Military Council’s annual meeting on Aug. 1. The alleged purge was reported by the Turkish press.

Bellicose comments by Turkey’s Foreign Minister Mevlut Cavusoglu today suggest, however, that little has changed. Cavusoglu said that Turkey would not “tolerate” any “delaying tactics” by the United States. He repeated Turkey’s demands that the safe zone would reach a depth of 32 kilometers (20 miles) and be cleared of all YPG and PKK “terrorists” in line with "a promise" from President Donald Trump.

Cavusoglu confirmed that a US military delegation led by EUCOM deputy commander Lt. Gen. Stephen M. Tweety was traveling to the southeastern province of Sanliurfa in connection with a proposed joint operations center to oversee the implementation of the safe zone. He added that Turkish drones had begun overflying the area.

Kobane appeared to contradict him, asserting that Turkey’s request to the United States to open the airspace over the region under negotiation had been denied. “We did not agree to this and we never will,” Kobane said.

The SDF says it will not accept a zone any deeper than five kilometers (three miles). The presence of Turkish troops other than in joint patrols with US forces is another red line. “The Turkish footprint has to be light and in low-profile spots, and any joint patrols need to be carried out in coordination with the SDF,” the SDF-affiliated official said.

Kobane acknowledged, however, that the SDF had agreed to let the zone widen up to 14 kilometers (nine miles) in the chunk of land between the towns of Ras al-Ain and Arab-majority Tell Abyad. He did not explain why.

The SDF official described the region “as a pilot area” where the safe zone project would kick off.

It's presumably intended to accommodate the thousands of Syrian refugees in Turkey who originally lived there. Turkey has made clear its intentions to return Syrians indigenous to the area, calling it a “peace corridor.”

Kobane indicated that they were welcome, saying, “We have invited them back.” But those who belonged to the Islamic State or other extremist groups that had subjected “the Arab people, the Kurdish people and the other peoples of this region to tyranny,” he warned, “can return assured that they will be tried by our courts.”