After more than a year of stalled negotiations between Egypt and Ethiopia on the Grand Ethiopian Renaissance Dam, Egypt’s diplomatic moves at the regional and international levels seem to have led nowhere. 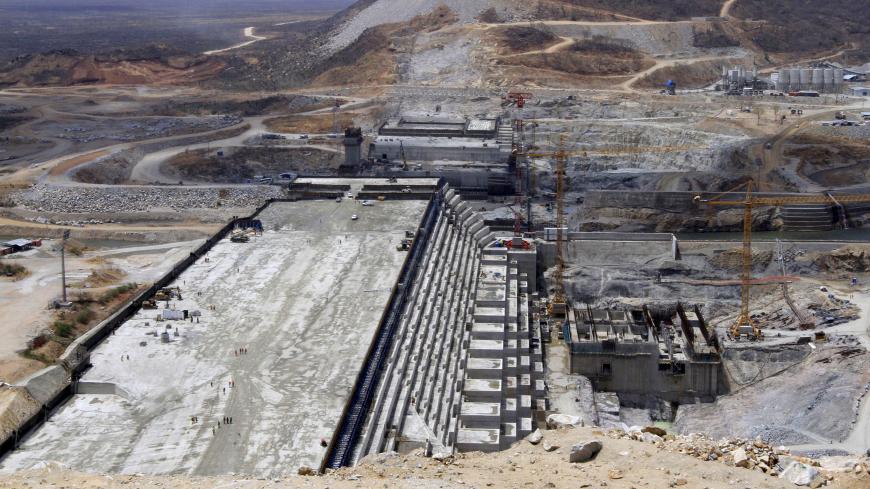 CAIRO — Egypt has initiated several international diplomatic moves expressing its deep concern about what it says is Ethiopia’s stalling and failure to reach a comprehensive agreement on filling and operating the Grand Ethiopian Renaissance Dam (GERD), which it sees as a threat to its water supply.

This comes after a year and four months' lull in negotiations, since Ethiopian Prime Minister Abiy Ahmed visited Cairo in June 2018 and repeated after President Abdel Fattah al-Sisi the famous oath, “I swear to God, we will not cause any harm to Egypt's Nile water.”

Technical, political and security negotiation rounds have been taking place for more than four years now, since the presidents of Egypt, Sudan and Ethiopia signed the Declaration of Principles in March 2015. At the time, the declaration was seen as a breakthrough in the crisis, which continues to go unresolved. Since then, Sisi has made many statements seeking to allay the Egyptian public's fears about the dam. In January 2018, he announced the crisis with Ethiopia was over and said there were several paths to a solution.

Yet just this month, on Sept. 14, his statements at the annual National Youth Conference were alarming. Speaking of the dam construction that started in 2011, Sisi said Egypt has been “paying since 2011 for one mistake … a price we’ve paid and will continue to pay.” He asserted, “Dams would not have been built on the River Nile … was it not for 2011,” in reference to the January 2011 Revolution.

Responding to a question concerning the dam at the “Ask the President” session held on the sidelines of the Youth Conference, Sisi recalled the Iraqi water shortage after the fall of the Iraqi state. He said, “Iraq in 1990 received 100 billion cubic meters (bcm) of water, but now it only receives 30 bcm.”

In early September, Egypt had launched official diplomatic efforts with other countries.

Foreign Minister Sameh Shoukry briefed foreign ministers attending a Sept. 10 Arab League meeting in Cairo on the difficulties marring the dam negotiations. He said Ethiopia has been inflexible recently and has even attempted to manipulate the situation. Arab League Secretary-General Ahmed Aboul Gheit said at a press conference that day that the Arab ministers had expressed solidarity in protecting Egypt's water supply, which they agree is an integral part of overall Arab security.

As well, during a Sept. 12 meeting with ambassadors of European countries to Cairo, Egyptian Deputy Foreign Minister for African Affairs Ambassador Hamdi Loza briefed them on the latest developments regarding the dam and stressed Egypt’s uneasiness over the extended length of negotiations. A statement by the ministry after the meeting said Ethiopia has demonstrated “an insistence to impose a unilateral vision while disregarding the interests of others’ interests and without giving due diligence to avoiding damages to two estuary countries, especially Egypt, which depends on the Nile as the lifeblood of the Egyptian people.”

After a round of technical negotiations Sept. 15-16 with Sudan in Cairo, Ethiopia and Egypt remain at odds.

Despite Egypt's diplomatic mobilization ahead of the meeting, Ethiopia did not respond to any diplomatic pressure to approve or even discuss the Egyptian vision. Egypt had proposed filling the dam’s reservoir within seven years and releasing 40 bcm of Nile water annually to downstream countries.

Ethiopian Minister of Water and Energy Seleshi Bekele voiced his country’s rejection of Egypt's requests. Ethiopian news website Addis Standard cited a classified document outlining Ethiopia’s rebuke of Egypt's proposals. The Egyptian vision would "prolong the filling of GERD indefinitely" and “compensate for the Egyptian water deficit by serving as a second backup reservoir to High Aswan Dam," according to the document. Egypt's plan would mean the dam wouldn't “deliver its economic return to Ethiopia … [and would] infringe on Ethiopia’s sovereignty."

The document added, "Ethiopia [would] forfeit its rights to equitable and reasonable utilization of the Blue Nile water resources.”

Shoukry summarized Egypt's position in dealing with the dam crisis by not yielding to the de facto policy that Ethiopia has been imposing since 2011. In remarks at a press conference Sept. 15, he said, “The will of one party will not be imposed by creating a concrete situation that is not being dealt with within the framework of consultation and understanding.”

Days later, Shoukry spoke about the dam in an exclusive, wide-ranging interview Sept. 21 with Al-Monitor at the United Nations in New York, where he emphasized the "life and death" nature of the negotiations. "I don't think anybody would agree that the Ethiopian development should come at the expense of the lives of Egyptians," he said.

A diplomatic official familiar with the Renaissance Dam negotiations told Al-Monitor in a telephone interview, “The continued stumbling of the negotiations and the failure of commitment or implementation of any of the items of the agreements reached in the previous meetings at the political, technical and security levels have become a source of grave concern. It's not easy, but the Egyptian negotiators have offered many solutions and middle ground visions to achieve the best interest of all parties by filling the dam reservoir in a way that doesn't harm Egypt and benefits Ethiopia.”

The official, who spoke on condition of anonymity given the sensitivity of this topic, added, “Egypt [gave up] many of its demands so as not to disrupt the course of negotiations, such as the World Bank intervention, which Ethiopia had rejected. Cairo has been dealing in good faith with all proposed visions and solutions, but the continued Ethiopian refusal, without offering any realistic alternative that reduces the risk of damages caused by the dam filling and operation, makes it difficult for negotiators to work [and] is a mere waste of time.”

The source went on, “Egypt will knock on all doors and use all international and regional diplomatic methods to guide the Ethiopian side to find a serious and comprehensive agreement on the filling, operation and management of the dam to safeguard the interests of the three parties (Egypt, Sudan and Ethiopia) and make the dam damage tolerable."

Regarding the preliminary results of Egypt's international efforts, the source sees a strong understanding and support at the Arab and European levels for Egypt's concerns. “Egypt will take other measures in other international forums, including the United Nations General Assembly meetings,” said the source.

The water ministers of the three countries will meet again Oct. 4-5 to again discuss terms of the agreement on filling and operating the dam.