Will Cairo succeed in stopping Ethiopian control over Nile waters?

Egypt accuses Ethiopia of procrastinating in the renewed negotiation sessions on the Nile Dam in order to begin filling the controversial dam. 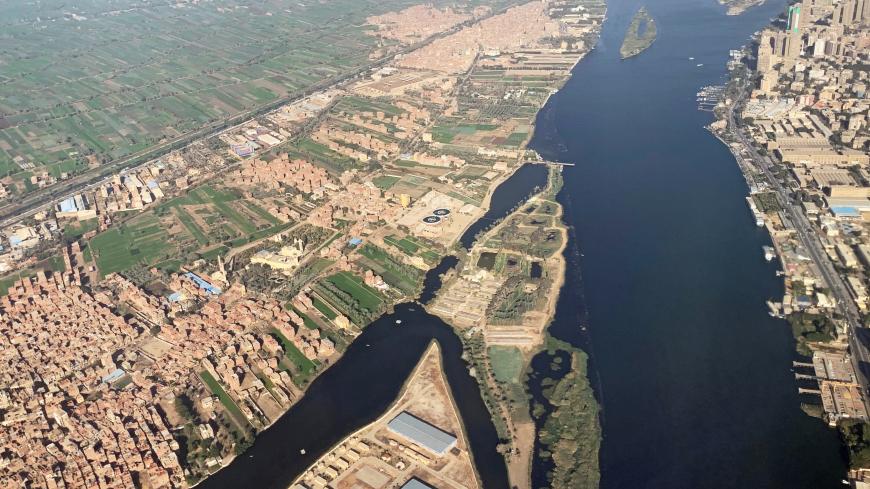 A view from an airplane window shows buildings around the Nile River in Cairo, Egypt, March 10, 2020. - REUTERS/Mohamed Abd El Ghany

CAIRO — Amid tension and anticipation, technical negotiation sessions have occurred daily since June 9 — between the irrigation ministers of Egypt, Sudan and Ethiopia, and three observers representing the United States, the European Union and South Africa — following a Sudanese initiative to resume negotiations to reach a comprehensive agreement that would determine the rules of filling and operating the Grand Ethiopian Renaissance Dam (GERD).

Ethiopian Prime Minister Abiy Ahmed spoke in front of the Ethiopian parliament June 8 ahead of the meetings, stressing that “the decision to fill the GERD reservoir is irreversible.” The Ethiopian government already specified July as the starting date for water storage in the dam’s reservoir without waiting for Sudan and Egypt’s approval.

Ethiopia’s insistence on filling the dam figured on the agenda of the meeting that Egyptian President Abdel Fattah al-Sisi held with the National Security Council June 9 to discuss the steps to deal with Ethiopia’s unilateral decision to fill the reservoir. Following the meeting, presidential spokesperson Bassam Radi said in a press statement commenting on the launch of technical negotiations, “The resumption of the negotiations June 9 was three weeks late since the Sudanese prime minister’s invitation.” He warned that the negotiations might become “a new tool for stalling and reneging on obligations.”

Sudanese Minister of Water Yasser Abbas has attempted to portray the meetings in a positive light since they began, since Sudan was the one that called for the resumption of the negotiations. In press statements June 9, Abbas described the setting of the first meeting as “positive and fruitful in terms of discussions between the three parties.”

However, the Egyptian Ministry of Water replied in a press statement June 10, “It is difficult to describe the meeting as positive since the discussions showed Ethiopia’s inclination to reopen doors that had been closed and settled in Washington.”

A technical official participating in the ongoing negotiations told Al-Monitor on condition of anonymity, “Egypt wants a comprehensive agreement that includes all technical and legal aspects of filling and operating the GERD, in addition to strict provisions that would bind parties to the agreement and the implementation of its provisions. It should not be just another legal document short of any obligations for Ethiopia.”

The source added, “Egypt’s message not to mess with its interests in the Nile waters and not to stall in time-consuming negotiation deviousness has become clear.”

Egypt wants to reach a comprehensive agreement based on the outcome of the Washington meetings and the document redacted by the US Treasury Department and the World Bank Feb. 21. Meanwhile, the Ethiopian Ministry of Water and Resources did not mention in a press statement June 10 any intention to sign said agreement.

The Ethiopian statement said the goal behind resuming the negotiations is to build “a genuine dialogue and negotiation on the guidelines and rules for the first filling and annual operation of the dam.” Another condition by Ethiopia: “The working document of the legal and technical teams of the three countries during the meeting of Feb. 12-13, 2020, should be the basis for negotiation. In this context, Ethiopia shared its guidelines and rules on first filling and annual operation of the GERD. Sudan also submitted its position.”

In the same statement, Ethiopia mentioned the importance of fully respecting the texts of the Declaration of Principles signed in March 2015. The fifth provision of the agreement determines the cooperation principles in filling and operating the dam, and stipulates a consensus over the guiding rules and provisions to fill the dam while the dam is being built — in addition to the annual rules of operating it. Ethiopia, the owner of the dam, has the right to amend the rules occasionally, provided it informs the downstream countries, namely Egypt and Sudan, of any urgent situation necessitating amendment of the operation policies of the dam, according to the declaration. This gives Ethiopia privileges to proceed with its storage and building operations without signing any binding agreements, in addition to granting it the right to amend the operation policies yearly without waiting for approval of the downstream countries and while contenting itself to notifying them.

Ethiopia has refused the Egyptian proposal to commit to the outcome of the agreement in Washington. In light of its stance, during the second session of the technical meetings June 10, the Ethiopian delegation made a proposal including the mechanism that Ethiopia is relying on to fill and operate the dam. Egypt and Sudan rejected the proposal. The spokesperson for the Egyptian Ministry of Water, Mohammed al-Sebaie, said in a press statement following the third session of talks June 11, “Egypt and Sudan had their reservations over the Ethiopian proposal because it completely reneges on the principles that the three countries agreed on in Washington. Ethiopia has to reconsider its stance, as it is hampering any agreement.”

In another statement following discussions on June 13, Sebaie said the negotiations are still faltering, adding that Ethiopia hopes to sign a nonbinding document, as per which the downstream countries would relinquish their water rights and recognize Ethiopia’s unconditional right to use the Nile waters unilaterally and to fill and operate the GERD based on its own discretion.

Professor of political science at the University of Cairo Rawya Toufic told Al-Monitor that the escalating dispute between Egypt and Ethiopia “was expected.” She added, “Ethiopia is interpreting the Declaration of Principles in a way that allows it to perform the first filling without an agreement, since Egypt allowed the construction to continue during the previous negotiation stages. The nature of the dam allows filling while continuing with the construction.”

Toufic argued, “Due to time constraints, Egypt might have to accept a partial agreement on the first filling without including the operation of the dam and the coordination mechanism, especially since Ethiopia insists that filling the dam during the first year will be limited to 4 billion cubic meters and will not have a tangible effect on Egypt and Sudan. A military move is still unlikely.”

While talks are ongoing without tangible progress, Ethiopia responded to insinuations of military solutions from Egypt. Ethiopia’s Deputy Army Chief Birhanu Jula said in a press statement June 12 that his country will firmly defend itself and will not negotiate over its sovereignty. “Egyptians and the rest of the world know too well how we conduct war whenever it comes,” he added, accusing Egypt of using its weapons to “threaten and tell other countries not to touch the shared water.”