Egyptian President Abdel Fattah al-Sisi approved a new law on mining that would help promote the mineral sector by attracting foreign investors and regularizing the industry. 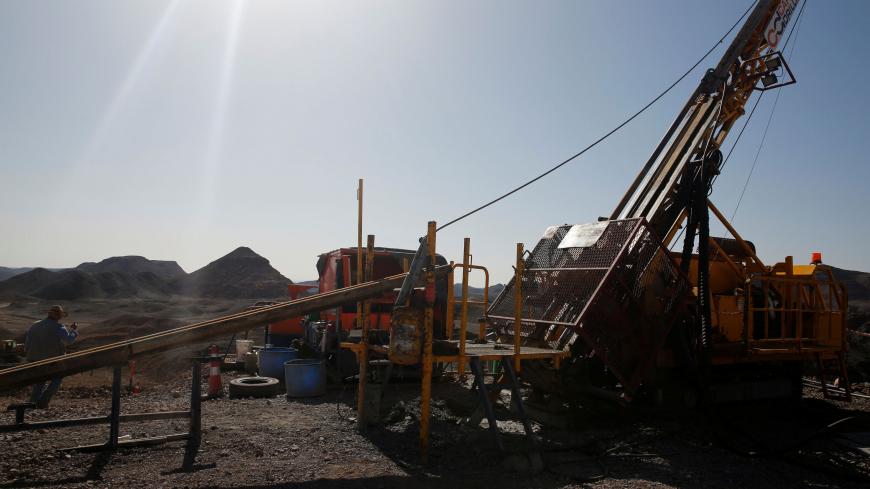 Egyptian investors and economists are expecting that the country’s new mining law will open the way for more investments in the field of mineral exploration and extraction and therefore boost the national economy and state revenues.

On Aug. 13, President Abdel Fattah al-Sisi approved a law to amend some provisions of the Mineral Resources Law No. 198 of 2014. The measure had been approved by the parliament the previous month.

Legislators said the law aims to establish clear mechanisms to exploit Egypt's mineral wealth from quarries and mines while ensuring the largest possible return in favor of national income.

Under the new law, fees collected by the government from companies investing in the mineral wealth sector would be a maximum of 15% and a minimum of 5%. Under the old law, fees stood at 20%; they have been reduced to encourage more investors to inject their money into this sector. The rent value of mines would be modified every three years instead of there not being a specific timeframe.

Oil Minister Tarek el-Molla said in press statements that the amendments are an essential step for maximizing the added value of Egypt's natural wealth within the framework of Vision 2030 for sustainable development. The amendments, he added, also aim to keep abreast of developments in international practices in the field of mining investment, so as to contribute to attracting the best mining companies to Egypt.

“The Ministry of Petroleum’s sector development strategy aims to achieve tangible results in the short term, in addition to achieving a quantum leap in the performance of the mining sector by 2030, including the contribution of the sector to the national income by $7 billion, creating 110,000 new jobs, and attracting investments worth $700 million,” he said.

According to Molla, the mineral wealth sector contributes 0.5% to the gross domestic product.

Businessman Naguib Sawiris, head of Orascom Investment Holding, called the new mining law in Egypt a “bold step,” saying the mining sector can be a potential source of income parallel to oil in Egypt. In an interview with Al-Arabiya TV channel Aug. 27, Sawiris said that Egyptian and international investors have opportunities in different countries of the world, such as Ghana, Ivory Coast, Burkina Faso and others. “The new law and its executive regulation should raise Egypt's competitiveness in this field in extracting gold and copper at a regional level,” he added.

Ahmed el-Shami, an economist and professor of feasibility studies at Ain Shams University, said the government has embarked on a strategy that focuses on legislative reform, which was done through the new mineral wealth law, as well as separating the stages of research and exploration from the exploitation of extracted minerals, especially since there are many international companies specialized in the detection, research and exploration for minerals only.

“The government has also worked on facilitating the licensing of mines and conducting exploration works in them, and finally the development of the youth cadres to raise their efficiency,” Shami told Al-Monitor.

The government started this strategy in March 2018 when it signed a contract with the global consultancy group Wood Mackenzie to upgrade the mining sector.

Shami further noted that more than 90% of the land in Egypt has untapped mineral wealth and if the investment is done well, it will inject billions of dollars into the public treasury. “There are land plots in Egypt known internationally for the size of their minerals, most notably the Red Sea, the Delta and the Golden Triangle,” he said.

Fekry Youssef, undersecretary of the Ministry of Oil for Mining Affairs, said Egypt is rich in precious metals that were dealt with randomly before the amendment of the law; the previous approach meant that Egypt did not always make the best use of the country’s treasures buried in the desert in various provinces.

The new law, he added, should facilitate matters for investors and businessmen and encourage them to inject their money in the mining sector. “The new law includes 34 articles that are enough to preserve the country’s wealth of minerals and exploit them in a scientific and practical way,” Youssef said.

He added that the new law would help satisfy the country's needs for mineral resources, and would help establish industrial projects based on these available minerals to achieve the optimal economic exploitation of this wealth.

“We are also working on developing the sector as a whole. We have launched training programs for our workers to hone their skills. The Ministry of Education has also signed a cooperation protocol this month with Egypt Gold Company to open the first-ever school for jewelry in the country,” Youssef said.