Turkey's Defense Minister Hulusi Akar has gotten deeply involved in tactical and operational matters and anxiety is growing in the Turkish military and the ruling party that Akar is taking the reins in Syria. 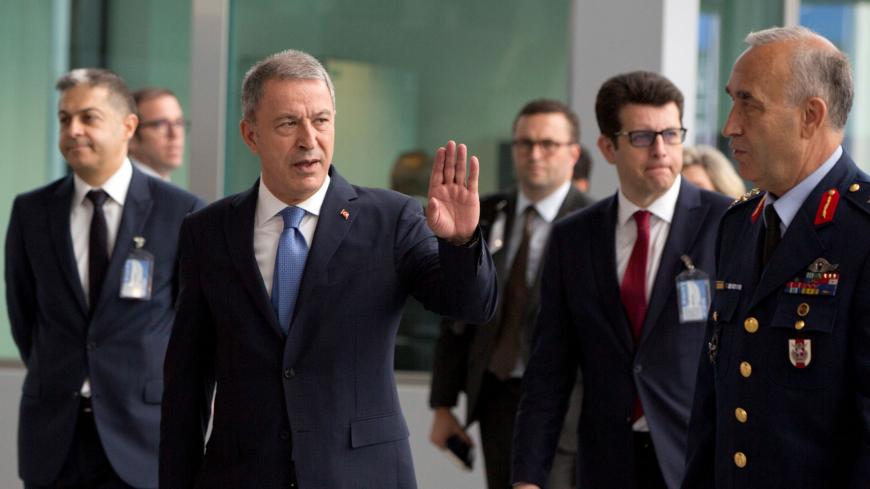 Hulusi Akar has assumed the duties of defense minister, foreign minister, interior minister and intelligence chief in the process of setting up a safe zone along Syrian border with the cooperation of the United States. It did not escape notice that all the bargaining with the US officials for the safe zone was conducted not by the Turkish Foreign Ministry but by the Defense Ministry. The negotiations led by Akar resulted in a somewhat cryptic and open-ended road map.

Foreign Minister Mevlut Cavusoglu took a hawkish stance toward the United States, voicing harsh comments while Akar appeared to be trying to find a middle ground to continue negotiations. Some observers described the tactic as good cop-bad cop strategy. Regardless, if it had not been for Akar and his diplomatic skills, we wouldn’t be talking of cooperation with the United States east of the Euphrates River and for a safe zone.

On Aug. 16, Akar, Chief of General Staff Yasar Guler, Army commander Gen. Umit Dundar, Air Force commander Gen. Hasan Kucukakyuz, Navy commander Admiral Adnan Ozbal and Turkey’s spy chief Hakan Fidan visited the command center where Turkey runs its military operations in northern Syria. They inspected the units, ate lunch with troops and were briefed about the latest progress in safe zone efforts in coordination with the United States. Akar obviously wanted to be seen inspecting all the units one by one.

It's unusual for a defense minister, who should be more focused on strategic and political affairs, to be so involved in tactical and operational matters. Akar clearly wants to be assured that Turkey is prepared for its role in setting up and managing the joint safe zone with the United States.

In Ankara, even in the ranks of the Turkish Armed Forces (TSK), a sizable group holds that the joint operation with the United States is too vague and open-ended and against Turkish interests. They believe that the United States will eventually force Turkey to recognize the legitimacy of the Syrian Kurdish Democratic Union Party and its armed wing, the People’s Protection Units, as a quasi-state entity in northeast Syria. Turkey considers both groups a threat to its national security because of their ties with the outlawed Kurdistan Workers Party, which is considered a terror organization by Turkey along with other Western powers.

According to leaks to the Turkish press, there is much apprehension about the operations with the United States in northeast Syria not only among some TSK officers but also in the ruling Justice and Development Party (AKP) and other anti-US nationalist circles. There are reports of anxiety within the AKP that Akar will take over the entire Syria policy and marginalize Cavusoglu and other AKP officials.

This discomfort with Akar’s activities was reflected in the pro-government press' reporting on his latest visit to northern Cyprus, the region east of the Euphrates and the safe zone.

One significant criticism in Ankara of Akar’s growing profile is his practice of having the top brass to accompany him on all his trips and in meetings with high-level contacts. Especially within the AKP there are comments that with the attachment of the Turkish General Staff to the Defense Ministry, Akar’s control of the TSK has grown and that it is time to attach the General Staff, army-navy and air force commands to Turkish President Recep Tayyip Erdogan’s palace.

Another criticism of Akar is his habit of wearing uniform-like outfits with the logos of his ministry instead of traditional suits during his domestic travel, especially to military units.

Interestingly, there are no signs that Erdogan is uneasy with Akar's growing profile. One wonders whether Erdogan is choosing not to interfere with Akar for now, or if there is something holding the president back.

If Erdogan decided to put the brakes on Akar's rise, how would we know? It's very simple: We would begin to see the chief of general staff and the top brass accompanying Erdogan more and leaving Akar to travel solo.

Also, is Akar taking a calculated risk with his cooperation with the United States in northeast Syria while many officers, state officials and the Turkish public have concerns about this relationship?

Five active-duty Turkish generals, including two who have just been assigned to critical posts in Syria, requested retirement just two weeks after the Supreme Military Council meeting in a move that some reports claim was in protest against some of the government’s military decisions in Syria.

The turmoil in the TSK has not calmed and there is still resistance to Akar and his policymaking. Many generals perceive the Syrian operational zone as degrading assignments, career killers. These generals, who have done a lot for Turkish military operations in Syria, feel that this service and their sacrifices are going unappreciated.

Is Akar making a mistake by trusting the United States to the east of the Euphrates? Perhaps the answer to this question is lies in Erdogan’s current tolerance of Akar’s rise. If Turkey’s relationship with the United States in Syria doesn’t go as Akar wishes, at least Erdogan will have a ready scapegoat.

In short, Washington is tempering with sensitive power balances in the Turkish government with its Syria policy and cooperation with Turkey in northeast Syria. One hopes that Washington is aware of the ramifications.