Moscow has put its support behind a US-brokered security zone along the border between Turkey and Syria. 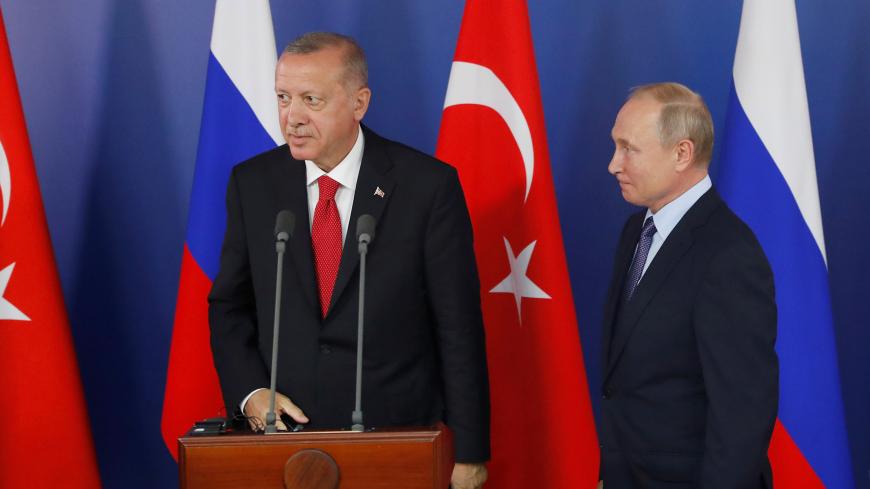 Turkish President Recep Tayyip Erdogan and Russian President Vladimir Putin during a joint news conference following their talks on the sidelines of the MAKS-2019 International Aviation and Space Salon in Zhukovsky outside Moscow, Russia, Aug. 27, 2019. - Maxim Shipenkov/Pool via REUTERS

Russian President Vladimir Putin backed the idea of establishing a security zone along Turkey's border with Syria. Putin aired his support following talks with Turkish President Recep Tayyip Erdogan in Moscow today. He was referring to ongoing efforts between Turkey and the United States to set up a security zone along Turkey's border with Kurdish-controlled northern Syria to avert conflict between Turkish forces and the United States' Kurdish allies whom Ankara calls terrorists.

Speaking at a joint news conference, Putin said, “Turkey is shouldering a huge refugee load. We are well aware of this [and] understand Turkey's concern over the security of its southern borders. We believe these are legitimate concerns.”

Today’s meeting was held at Erdogan’s request after Syrian regime forces targeted a Turkish military convoy said to be heading for Khan Sheikoun as opposition rebels were being driven out of the town. The attack left Turkish forces cut off at their observation post No. 9 in Morek. The private Haberturk news channel reported today that Russian military police were now effectively protecting dozens of Turkish forces marooned there.

Putin made no mention of either protecting or sustaining the Turkish presence in the so-called Idlib de-escalation zone agreed under the Astana track between Turkey, Russia and Iran and further refined in Sochi a year ago. Turkey has 12 outposts there that are meant to act as a buffer between the regime and Turkish-backed opposition rebels and to ease the flow of humanitarian aid to civilians. Turkey was also expected to somehow persuade thousands of jihadist militants affiliated with Hayat Tahrir al-Sham to join the “moderates” under its wing and prevent the rest from attacking regime forces and Russian bases. It has failed on both counts.

Putin said he and Erdogan have discussed “additional joint steps” to “eliminate” the “terrorists’ nests.” He repeatedly referred to the Astana process, which multiple commentators say is now dead. The common goal remains to establish a constitutional committee bringing together Syrian government and opposition representatives ahead of future UN-facilitated talks in Geneva, Putin said.

Erdogan focused on the threats posed by Bashar al-Assad’s forces instead, saying, “The regime’s provocations have reached the level of putting the lives of our soldiers in the region at risk.” He vowed that Turkey would use its right to self-defense, particularly on its borders. It was unclear why he emphasized Turkey’s borders when its forces are deeper inside Idlib.

He noted that while Turkey was fully committed to the Astana and Sochi accords, it would be unable to fulfill its pledges unless the regime ended its attacks in Idlib. He said over 500 civilians had died as a result. “Under the guise of combatting terrorism, [Syrian forces] are raining death from the skies and from the ground,” he said.

Erdogan added that he had briefed Putin on Turkey’s ongoing talks with the United States to establish a safe zone in northeastern Syria, assuring Putin that none of it would compromise Syria’s territorial integrity. In other words, Turkey and the United States were not hatching plans for a long-term US presence that would shut out the regime from the Kurdish-controlled region indefinitely.

The mood at the news conference was markedly different from the joviality displayed by both leaders earlier in the day when they showed up at the MAKS 2019 air show, a biennial event meant to showcase Russian air technology. The pair inspected a SU-35 fighter jet among other Russian goodies. Russia has offered to sell Turkey the state-of-the-art plane in lieu of US-made F-35 stealth bombers. Ankara was frozen out of a co-manufacturing consortium and banned from acquiring the F-35s after it ignored Washington’s demands to scrap its deal to buy Russian S-400 missiles. In a further display of bonhomie, Putin bought his Turkish guest an ice cream.

At the news conference, Erdogan looked tired and deflated.

Both leaders confirmed they had talked about deepening cooperation in the defense industry. Delivery of a second battery of the S-400 missile system was taking place in Turkey as they met.

Putin and Erdogan are scheduled to meet again in Turkey Sept. 16, together with Iranian President Hassan Rouhani for another summit within the Astana framework.

Correction: Aug. 28, 2019. An earlier version of this story incorrectly stated due to a translation error that Putin floated an Idlib buffer zone. He was referring to a US-brokered security zone in northeastern Syria.