In Moscow, ice cream may have been the only thing Erdogan got for free from Putin. 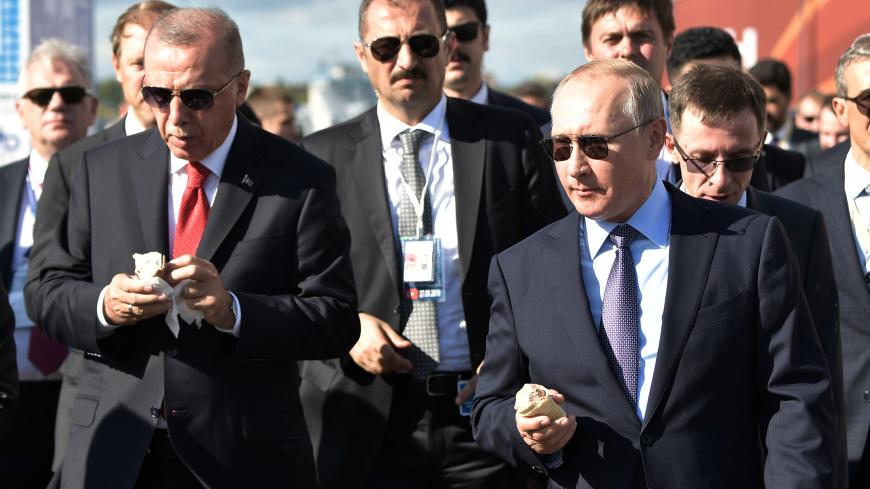 MOSCOW — They say that familiarity breeds contempt. In recent years Russian President Vladimir Putin has met his Turkish counterpart more than any other foreign leader. Practically every meeting between the two brings something amusing, be it Putin pulling the chair from under President Recep Tayyip Erdogan or treating the Turkish leader with Russian ice cream. Both obviously enjoy media attention and know how to work public interest in their personas. Both still have the ability to surprise the public. Both seem to enjoy it. Most importantly, however, they know how to link the projection of this “special personal relationship” between the two to the improvement of Russia-Turkey relations.

Only last week many expected — some with excitement, others with fear — that Moscow and Ankara are heading toward a concrete wall of uncompromised disagreements and are about to experience another crisis similar to that of November 2015 when Turkey shot down a Russian jet over Syria. Erdogan’s decision to visit Moscow came as a surprise and was by and large seen as a sign that Turkey was reaching a dead end in its policies in Idlib and was thus seeking a compromise in Moscow. Now Putin has Erdogan open the 14th International Aviation and Space Salon MAKS-2019, gives him a friendly tour around Russia’s most innovative military and civil vehicles and buys the Turkish delegation a selection of vanilla and chocolate ice cream. The ice cream, however, was the only thing Erdogan got for free in Moscow: Other things he had to either pay for, bargain over or concede.

“We have shown you a series of various products, both military and civilian. They not only demonstrate Russia’s capability in aerospace but also offer a variety of cooperation opportunities. We know about Turkey’s high-tech development plans. Of course, we could join forces in the areas where our capabilities are especially strong and sought after,” Putin told Erdogan on Aug. 27 after they attended the MAKS salon.

“Today we have taken a closer look at Russia’s defense industry. I would like to express satisfaction at the fact that today we also saw Russian-made engines for passenger airliners, combat aircraft, helicopters and other aviation equipment. We also watched the demonstration flights of combat aircraft, including the Su-34, Su-35 and Su-57. We have also been updated on Russia’s space activities and the measures you are taking to boost your space industry. Everyone knows that Russian researchers have reached very high standards in this sphere,” Erdogan replied.

Putin had a solid calculated reason to start Erdogan’s visit to Russia with demonstrations and offers of the Russian military hardware rather than discussions over Idlib. The two are still at loggerheads over the Syrian area but it’s the strategic independence in military affairs and defense policies that Moscow seeks to emphasize in relations with Ankara, not some regional disagreements in Syria that, in fairness, play little strategic role for Russia. It was also no coincidence that the second batch of the Russian S-400 missile systems arrived in Turkey the same day.

“Metaphorically speaking, Moscow is giving out umbrellas in case of rainy days to those who need it. The strategic significance of the deal is even more important than the positive toll it had on the bilateral relations. More countries that seek to secure their own sovereignty will see Russia as a provider of their sovereignty,” added Sushentsov, who is also a program director at the Valdai Club, a discussion group and think tank.

The focus on developing cooperation in the military-technical field was placed by Putin as being of bottom-line importance for the Russian-Turkish relationship, and it seems to have worked for the Russians. At least it helped set the tone for the subsequent discussion on Idlib and helped devise solutions, as temporary as they may be, acceptable more for Moscow than for Ankara.

Putin backed the idea of implementing a US-brokered buffer zone along Turkey’s border with Idlib as a decision to keep Turkey safe from tens of thousands of refugees and allow Assad take over one of the last opposition-held strongholds. Erdogan, however, wasn’t particularly excited either about the prospects of having to continue executing its commitments under the Sochi accord and having to somehow react to Syrian army attacks on its military posts without sparking a bigger spat with Moscow.

Putin, summarizing the results of the talks over the issue, said, “Russia and Turkey cooperate closely in the Astana format along with Iran. We believe this format is the most effective tool for overcoming the crisis in Syria.… [In Idlib] the terrorists continue shelling Syrian government troop positions and trying to attack Russian military facilities. We are convinced that the deescalation zone should not serve as a shelter for militants, or be a bridgehead for new attacks. In this context, the president of Turkey and I mapped out additional joint measures for neutralizing terrorist hotbeds in Idlib and normalizing the situation both in this zone and in the rest of Syria.”

In reality, it appears to mean that the Russian and Turkish militaries and intelligence teams get tasked with yet another mission of elaborating these “additional joint measures” that may virtually freeze the status quo until the trilateral summit between Putin, Erdogan and Rouhani in Ankara on Sept. 16. The trick is the status quo in the current situation likely means the continued advance of the Syrian army in the area at best, perhaps, with less deadly attacks on Turkey’s own military posts.

If this is the case, Putin’s “ice cream diplomacy” may prove to be more of a “dondurma treatment” that visitors encounter on streets of Turkish towns that involves ice cream vendors teasing the buyers — except for that with Putin the “teasing” serves some concrete political and operational goals. There are reassuring Erdogan that Russia cares for Turkey's strategic interests more than the United States while also gaining time for Assad to complete the takeover of Idlib.

Correction: Aug. 29, 2019. An earlier version of this story incorrectly stated due to a translation error that Putin floated an Idlib buffer zone. He was referring to a US-brokered security zone in northeastern Syria.