Syrian jets hit a Turkish military convoy today in Syria’s Idlib, killing three civilians and injuring 12 others in an attack that likely could not have occurred without Moscow's knowledge. 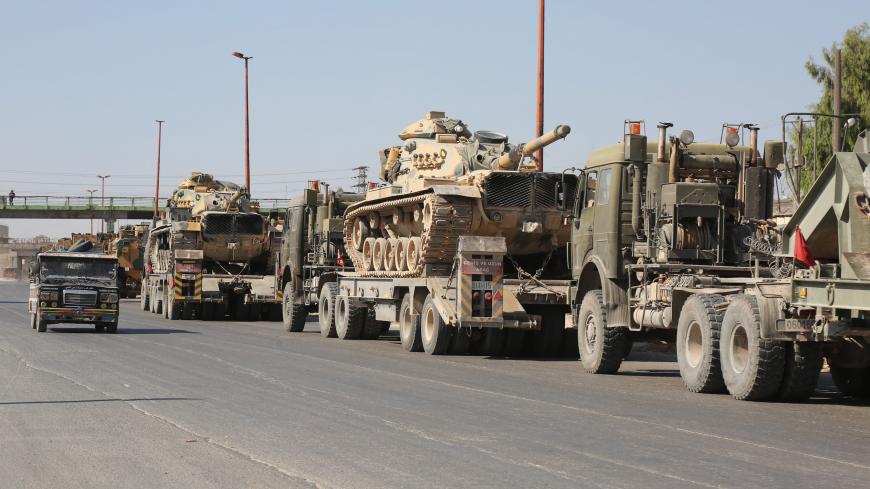 A Turkish military convoy is seen on Aug. 19, 2019, in Syria's northern province of Idlib. - Izzettin Idilbi/Anadolu Agency via Getty Images

The convoy was headed toward Turkish observation post number nine in Morek, the buffer zone it mans in the rebel-held province. Turkey has 12 such posts under the terms of the Sochi agreement struck with Moscow in September 2018 to dislodge the rebels and their weapons from the demarcated zone. Turkey did not provide any details about the identity of the victims. Rebel sources said one commander from the Sunni Islamist alliance Faylaq al-Sham was killed, while two other of the group's commanders were injured. Neither claim could be independently verified.

The Syrian Arab Army has been trying to wrest back Idlib in a new and concerted push launched in May, putting Turkish forces at risk, displacing thousands of civilians and wounding and killing hundreds of others. Idlib borders Turkey and is largely controlled by the jihadist group Hayat Tahrir al-Sham.

Turkey did not say who had carried out the strike. But in a veiled rebuke to the Kremlin, it said that operations were being carried out by regime forces in violation of agreements reached with Russia and causing huge harm to civilians. The violations were continuing, the statement continued, despite Turkey’s repeated warnings to Russian Federation officials. Turkey said it reserves the right to retaliate.

The Syrian state news agency SANA quoted Foreign Ministry sources as saying the Turkish convoy was loaded with munitions and was heading to Khan Sheikhoun to help “terrorist groups." The city in Idlib’s southern countryside is of huge strategic importance, home to the M5 highway linking Aleppo to Damascus and within targeting proximity of the regime’s Latakia stronghold. Regime troops reportedly entered the town for the first time yesterday since losing it to the rebels in 2014.

It remains unclear whether the airstrikes were directly targeting the Turkish convoy or seeking to halt its advance.

Why it matters:  The attack on the Turkish convoy likely could not have occurred without the knowledge of Russia, which controls the skies over northwestern Syria. Turkey says it provided Moscow with coordinates, begging the question of whether Turkey’s cooperation with Moscow more broadly within the Astana framework, and more specifically along the terms set in Sochi, is over.

Elizabeth Tsurkov, a research fellow at the Forum for Regional Thinking who closely monitors Idlib, told Al-Monitor, “It seems diplomatic engagement has broken down and the parties are attempting to make gains and defend their interests on the ground.” Tsurkov suggested it was more of a tactical shift, saying, “If they fear an escalation due to these military moves and counter moves, they can and will return to the negotiation table in Astana.”

Tsurkov continued, “By dispatching additional convoys into Idlib and Hama, Turkey is signaling it will not sit idly as the regime, backed by Russia, continues to capture more territory from the rebels. However, the regime and Russia are continuing to advance, using firepower around the Turkish convoys. Unless Turkey is prepared to escalate even further, its convoys will remain sitting ducks."

What’s next?  Turkish President Recep Tayyip Erdogan is a master at brinksmanship. So is his Russian counterpart Vladimir Putin. A full-scale regime onslaught against Idlib backed by Russia would unleash a tidal wave of refugees that Turkey can ill accommodate. Russian cooperation is also important for Turkey’s continued presence in Afrin.

Yet Erdogan also holds several important cards. Turkey remains the sole credible backer of the Syrian opposition and has the means to keep the rebellion slowly bubbling. For all the recent tensions over the S-400s, Turkey could yet strike a deal with the United States over Kurdish-controlled northern Syria. This may in turn prolong the US presence there, a nightmare scenario for the Syrian regime. As such, Erdogan and Putin will likely seek compromise, not escalation. However, history suggests that Turkey will likely have to cede more ground than the other way around.

Know more:  Check out Kirill Semenov's lastest on what's next for Russia in Idlib, as well as Turkey Pulse columnist Cengiz Candar's take on how Turkey is being pressed between Washington and Moscow in Syria.